Now Playing in Theater Only

With her huge eyes and delicate physique, Shira Haas made an indelible impression as the Emmy-nominated lead in the recent TV series Unorthodox. Here she stars as a Russian émigré to Israel, navigating (with her single mother) her teenage years, burdened by a largely undefined illness that makes all of her decisions infinitely more poignant. First-time writer-director Ruthy Pribar does an exquisite job of defining the complexities of a mother-daughter relationship that eschews clichés and sentimentality. Both actresses (Alena Yiv plays the mother) give riveting, yet understated performances that explore the inevitable chasm that divides the generations and creates barriers between the healthy and the sick – while limning a universal and timeless story of maternal love and loss.

Presented with support from The Joan S. Constantiner Fund for Jewish and Holocaust Films.

Presented with support from the Israel Office of Cultural Affairs, Consulate General of Israel in New York.

“An assured feature debut, balancing sobriety with emotional intensity. Actually a twin character study… (with) two superbly matched leads. This perceptively observed small-scale drama… continues to yield surprising nuances that keep you gripped. The maturity of the directorial voice is evident in its clear-eyed, rigorously unsentimental…There’s delicate understatement also in the consideration of each woman’s sexuality… seldomly depicted on screen.”
– David Rooney, The Hollywood Reporter

“Delivers an emotional wallop. Modest. Intimate. Subtle. Much of its power comes from a hypnotizing performance by Shira Haas, most recently seen as the young Hasidic community escapee on Netflix’s riveting Unorthodox. Haas’ nuanced gaze takes hold of the story, complicating its focus more than any dialogue could.”
– Eric Kohn, IndieWire

“Rare delicacy and emotional acuity. Unassumingly lovely. A pair of exquisitely pitched, mutually reflective performances help this low-key, grownup family drama stick fast in the head and heart. ASIA depicts that rug-pulling moment of transition we all go through as children, when we realize our parents… are as vulnerable and confused by life pivots as we are. (The actresses) aren’t just a persuasively cast physical match… (they) seem rhythmically synched. Haas offers a study in turbulent currents of feelings beneath a serene, even impassive, surface. Directed with calm intensity and focus.”
– Guy Lodge, Variety 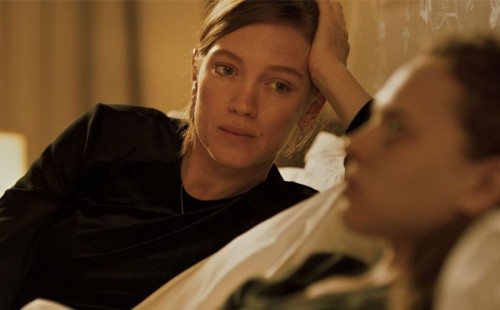