(1969, Jacques Deray) Lazy St. Tropez vacation beside the Hockneyesque swimming pool (la piscine) for lovers Alain Delon and Romy Schneider — until her ex Maurice Ronet suddenly drops in with his daughter Jane Birkin — and, as a former ménage à trois becomes a ménage à quatre, mortal consequences loom. Long a cult film in France, where it's celebrated as a masterpiece of Gallic Noir — but with much of the action taking place around the colorful, sun-splashed swimming pool of the title. Music by Michel Legrand. Screenplay by Jean-Claude Carrière and director Deray. DCP. Approx. 123 min. In French with English subtitles.

Restored in 4K from the original 35mm negative. Restoration supervised by Filmo, commissioned by SND, with the support of the CNC.

Presented with support from The George Fasel Memorial Fund For Classic French Cinema.

“THE HIT OF SUMMER 2021! Sex, opulence, a dash of danger. Could anything better describe New York’s post-lockdown mood? And then there’s the epic style: Come for Alain’s open-to-the-navel denim shirt, stay for Romy’s Courrêge-designed bathing suites. It turns out, many New Yorkers have.”
– Glynnis MacNicol, The New York Times
Read the article from the Sunday, August 22 Times Style section.

“Four ravishing stars, an equally beautiful villa in St Tropez, expanses of lithe caramel flesh and enough pouting sexual tension to light up the Empire State Building. It’s no surprise that thrill-deprived post-lockdown filmgoers in New York have been diving into La Piscine, having a languid dip, hauling themselves out and diving in all over again.”
– Ed Potton, The Times of London
Read the full review.

“STRIKING... A PRISTINE RESTORATION... Pretty people behaving poorly in beautiful settings is something we don’t see as much of in cinema. This is a MASTER CLASS in the subgenre, and one of UNUSUAL DEPTH.”
– Glenn Kenny, The New York Times
Read the full review.

“SEX, SUN… AND SUSPICION. A STAR-POWERED PSYCHOLOGICAL THRILLER.”
– Time Out

“Very occasionally we see a film so awkwardly yet compulsively enjoyable that it forces the highbrow viewer to own up: one that takes his or her notion of a Guilty Pleasure and elevates it to the status of High Art. Few films pull off this trick as consummately as La Piscine. Set in a to-die-for villa in the verdant hills overlooking Saint-Tropez, this icily elegant pas de quatre involves four of the most outrageously photogenic actors to ever appear on screen... Nothing that happens from here on is a surprise, exactly. We sit and revel in the glamour of it all, waiting for those hormonal and homicidal impulses to boil over – as, of course, they do.”
– David Melville, Senses of Cinema

“FOMO [Fear of Missing Out] is budding again with the promise of shared experiences, the requisite burden of braving the lines for Alice Neel at the Met to talk about it afterward, Romy Schneider and Alain Delon splashing in La Piscine at Film Forum, if you can snag a ticket.”
– The Cut 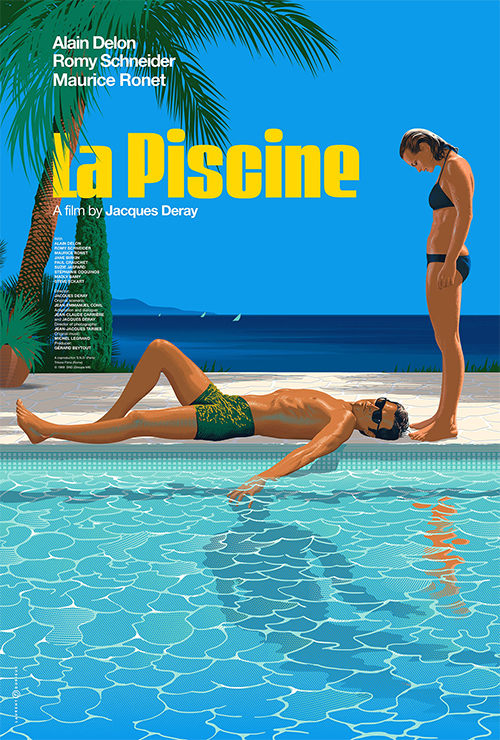