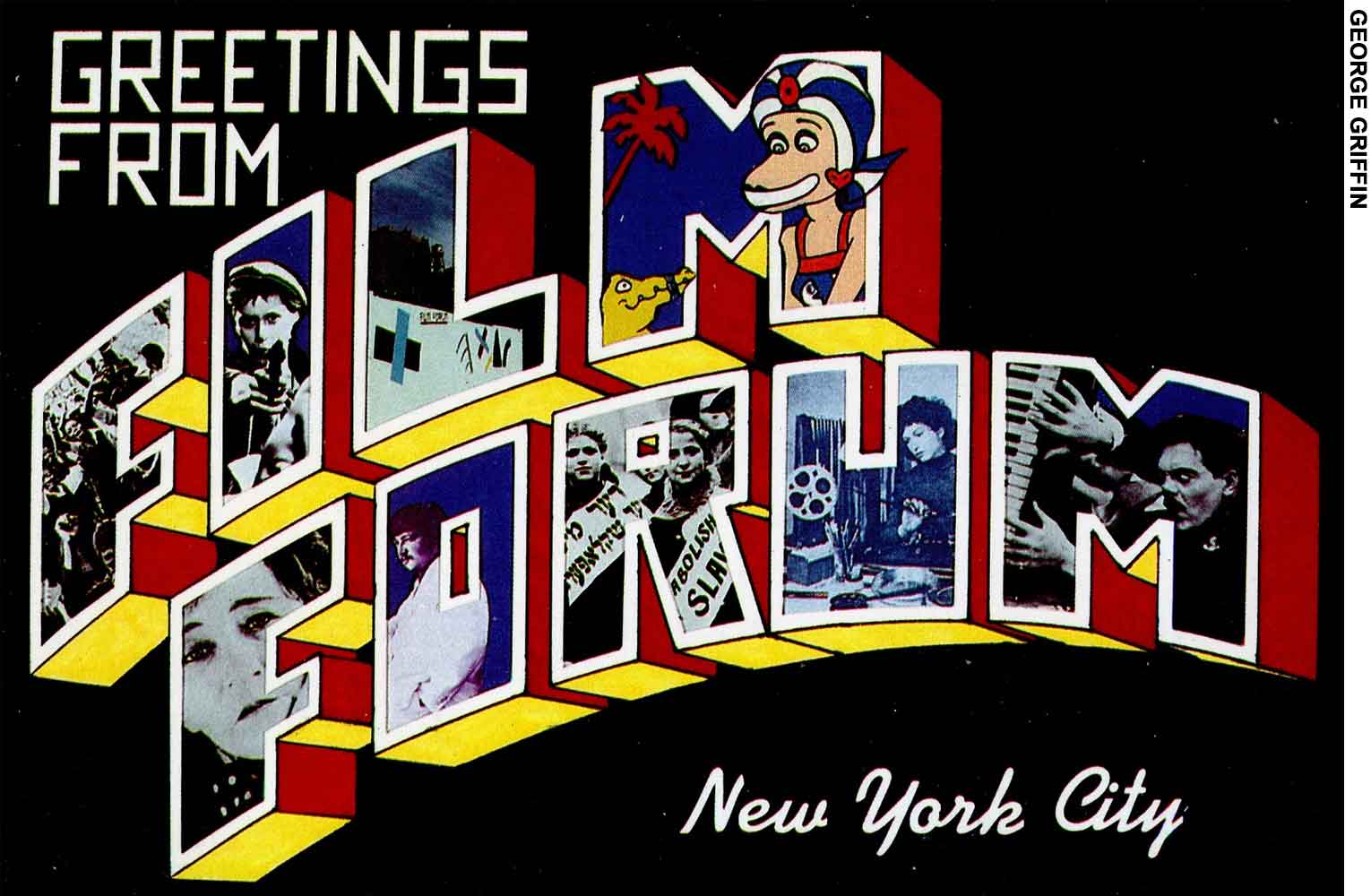 Adam Walker is Film Forum’s Director of Communications. In January he gave a presentation about the history of Film Forum at the Art House Convergence in Utah, immediately preceding the Sundance Film Festival. 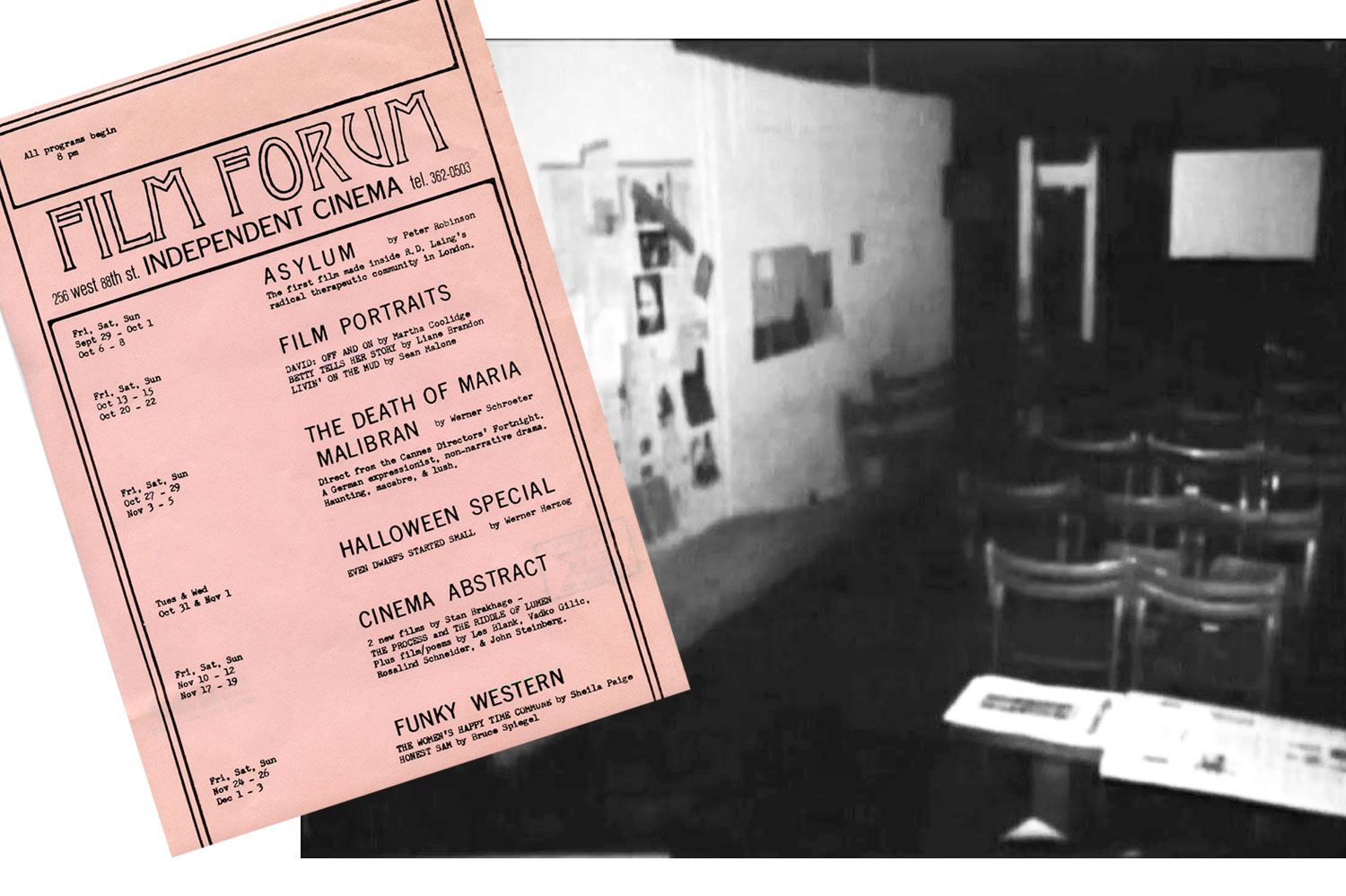 I would like, if I may, to take you on a death-defying cinematic adventure, navigating the wild terrain…of New York City real estate.  A tale of a plucky operation with just a projector and a dream, overcoming a legendarily hostile marketplace to become a bright thread in the fabric of the city.

Once upon time, specifically the year 1970, on Manhattan’s Upper West Side...

There was a room on the second floor of 256 West 88th Street called The Film Forum, with a breadbox-sized 16mm projector, fifty folding chairs, and a pull-down screen.  It was founded by two film buffs who ran indie films on weekends. After a couple years they were looking to move on – and in 1972 they met… 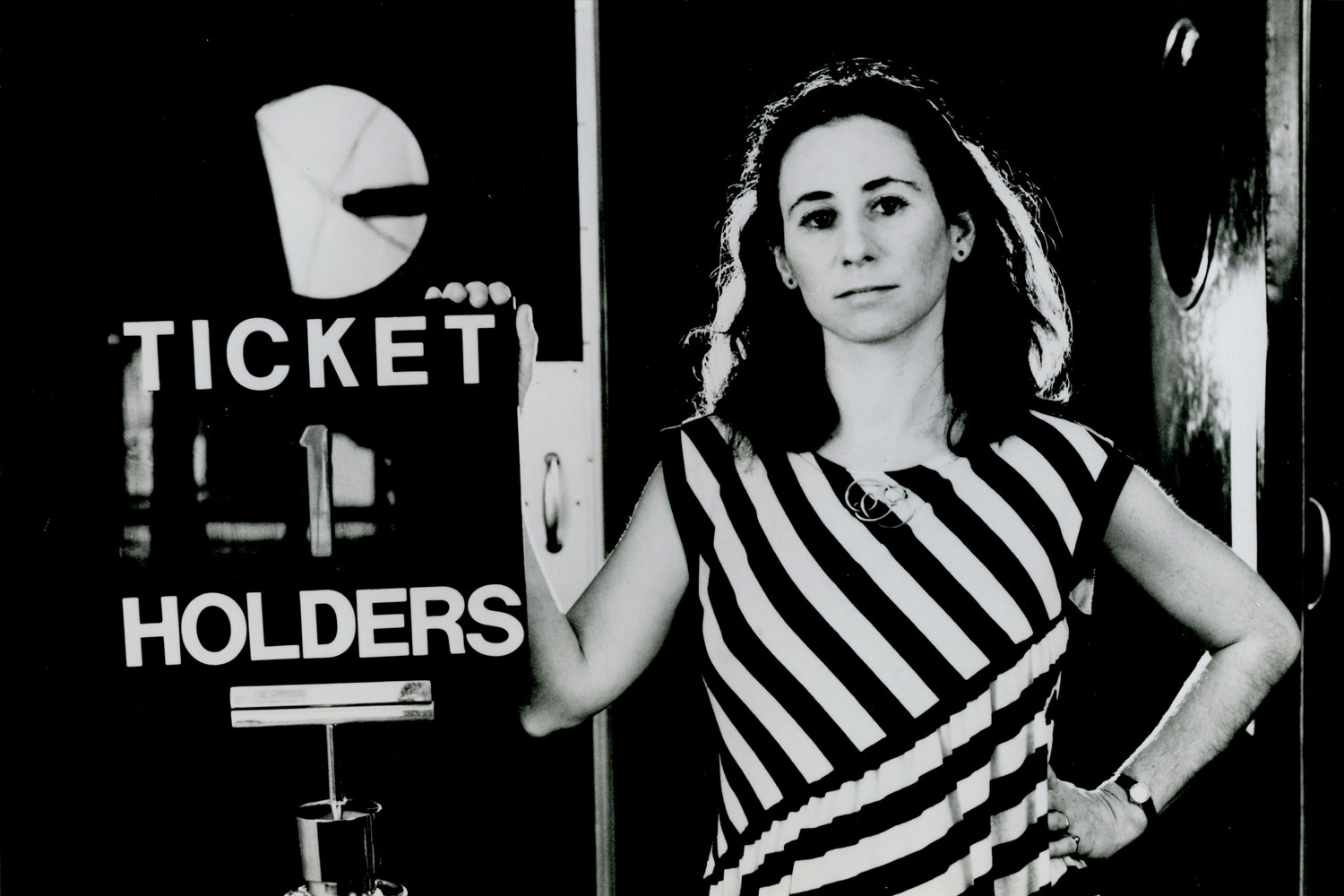 Karen Cooper – a recent Smith graduate, with keen critical judgment, ready to conquer the world. They gave Karen “the business” – which consisted of a suitcase full of carbon copies and a rubber stamp. She ran with it. In 1975, recognizing SoHo as an artist’s destination, Karen moved The Film Forum to the Vandam Theater downtown, and dropped the article THE. 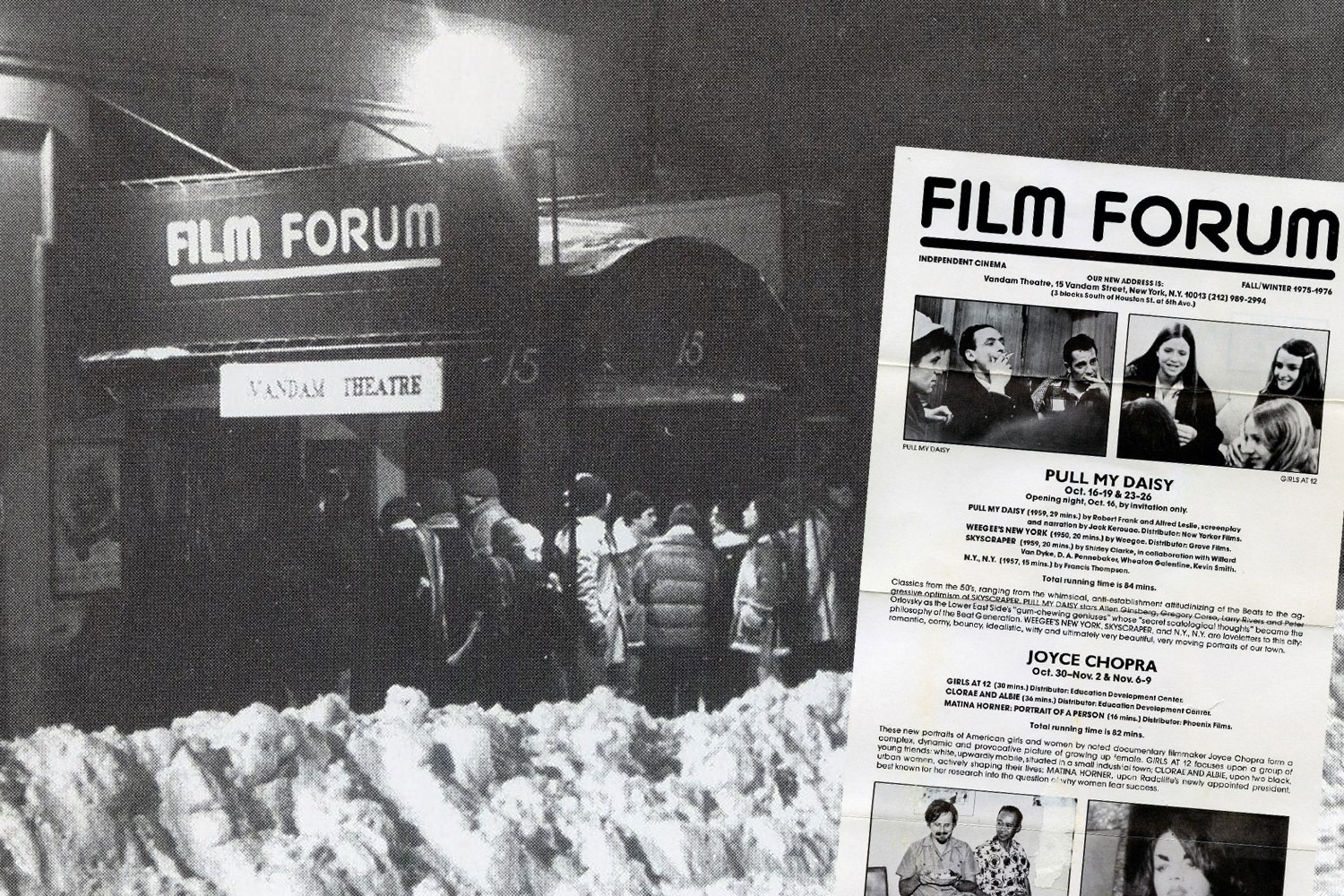 Film Forum was still only open on weekends, but it showed some of the boldest work being made at the time. Karen premiered early films from the New German Cinema – like Herzog and Fassbinder – and lots more. Here’s a crowd waiting in a snow storm for THE BATTLE OF CHILE in 1978. It became clear that Film Forum was outgrowing its small patch of SoHo. What to do? 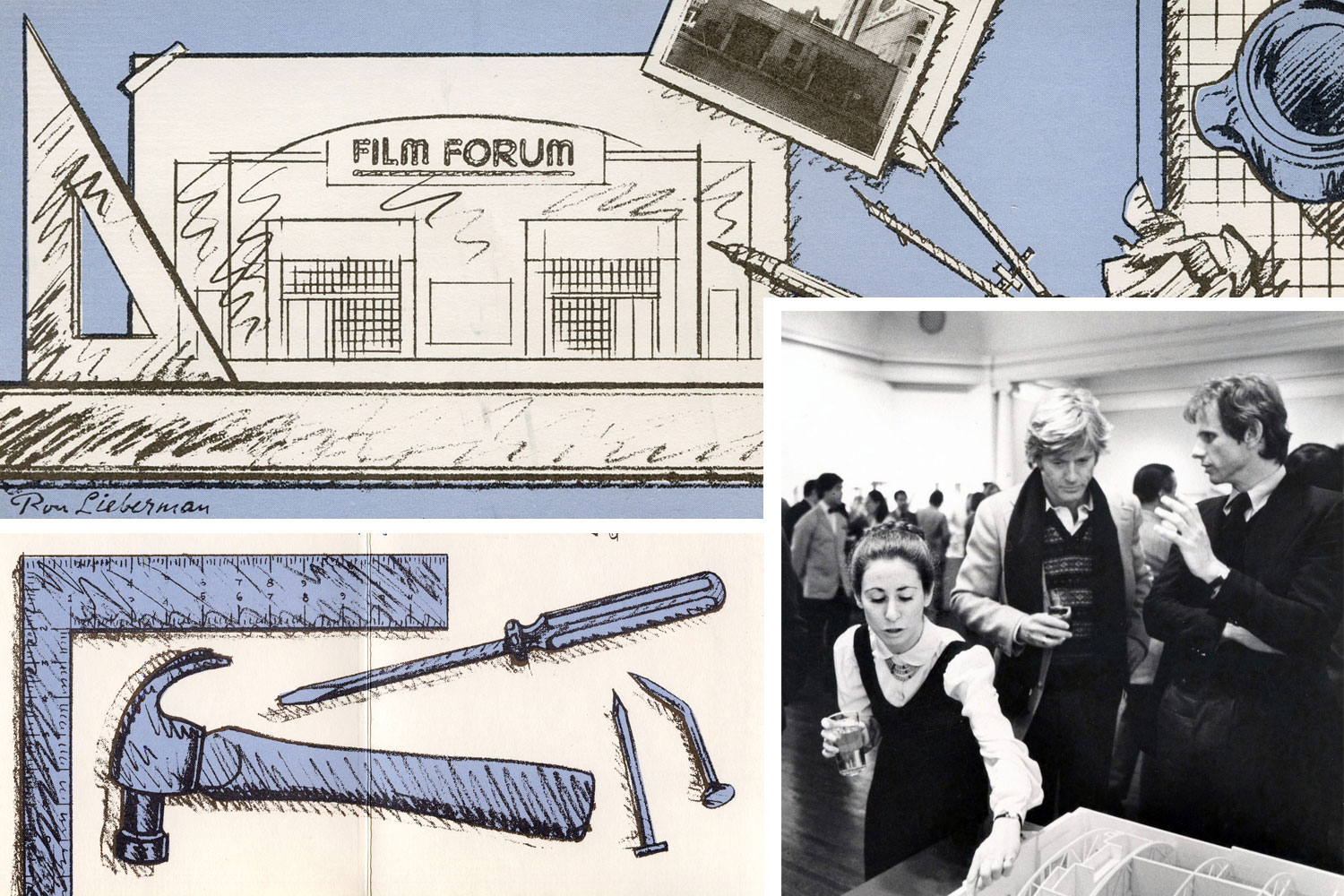 Build a new one! In 1980, thanks to a Ford Foundation loan and the support of many cinephiles (including indie patron saint Robert Redford, seen here), Karen raised the money to build a new theater. And, in a move that Joni Mitchell would admire, she demolished a parking lot on Watts Street near the Holland Tunnel, and put up a little piece of movie paradise. 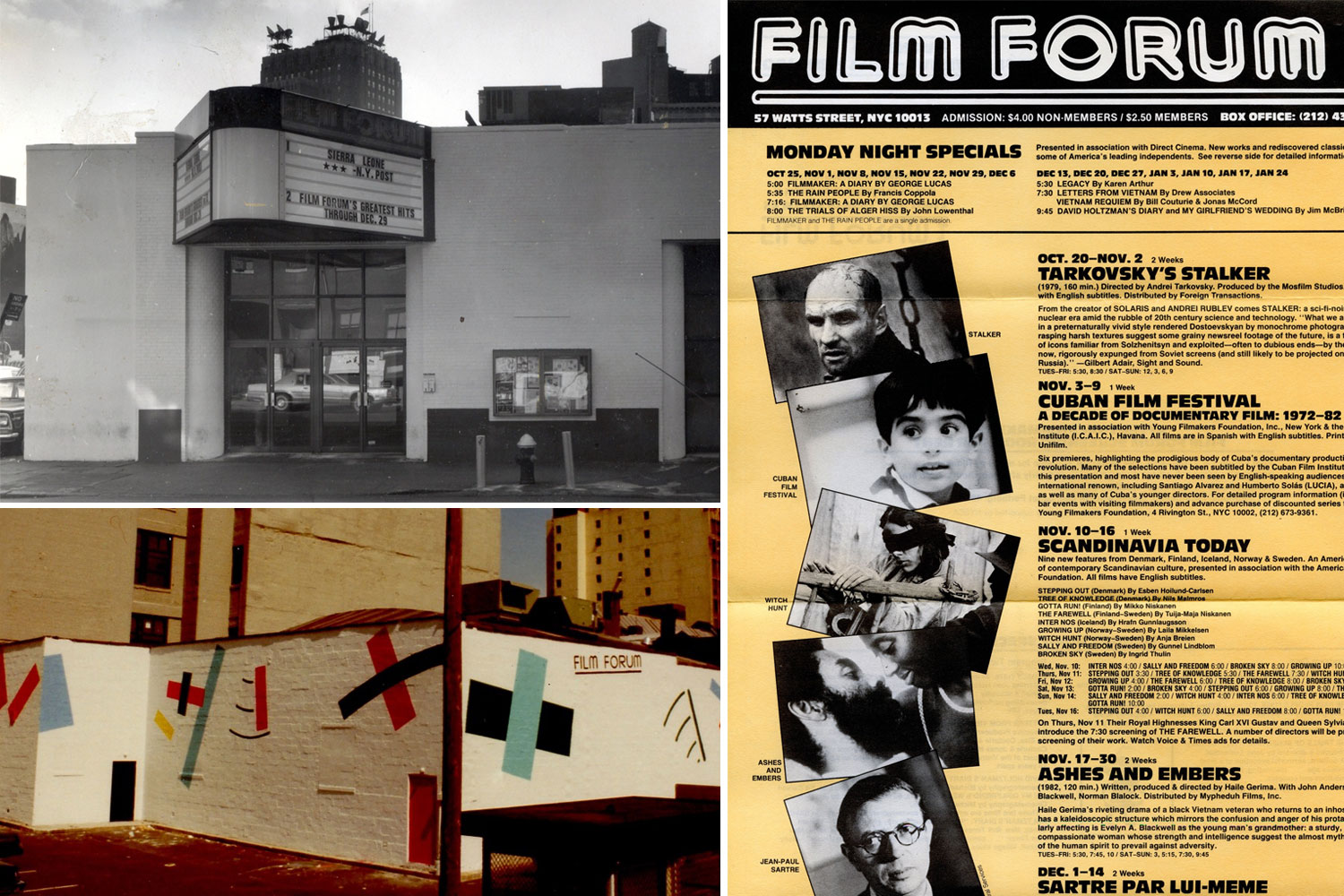 The Watts Street theater had two screens and was open every day of the week, 365 days a year. And look mom, we got a marquee! And 35mm projectors! And a mural by Robert Breer!

Now, I just have to take a quick side trip here, so please indulge me – when I was looking through the archive, I happened upon something I had to share. This… 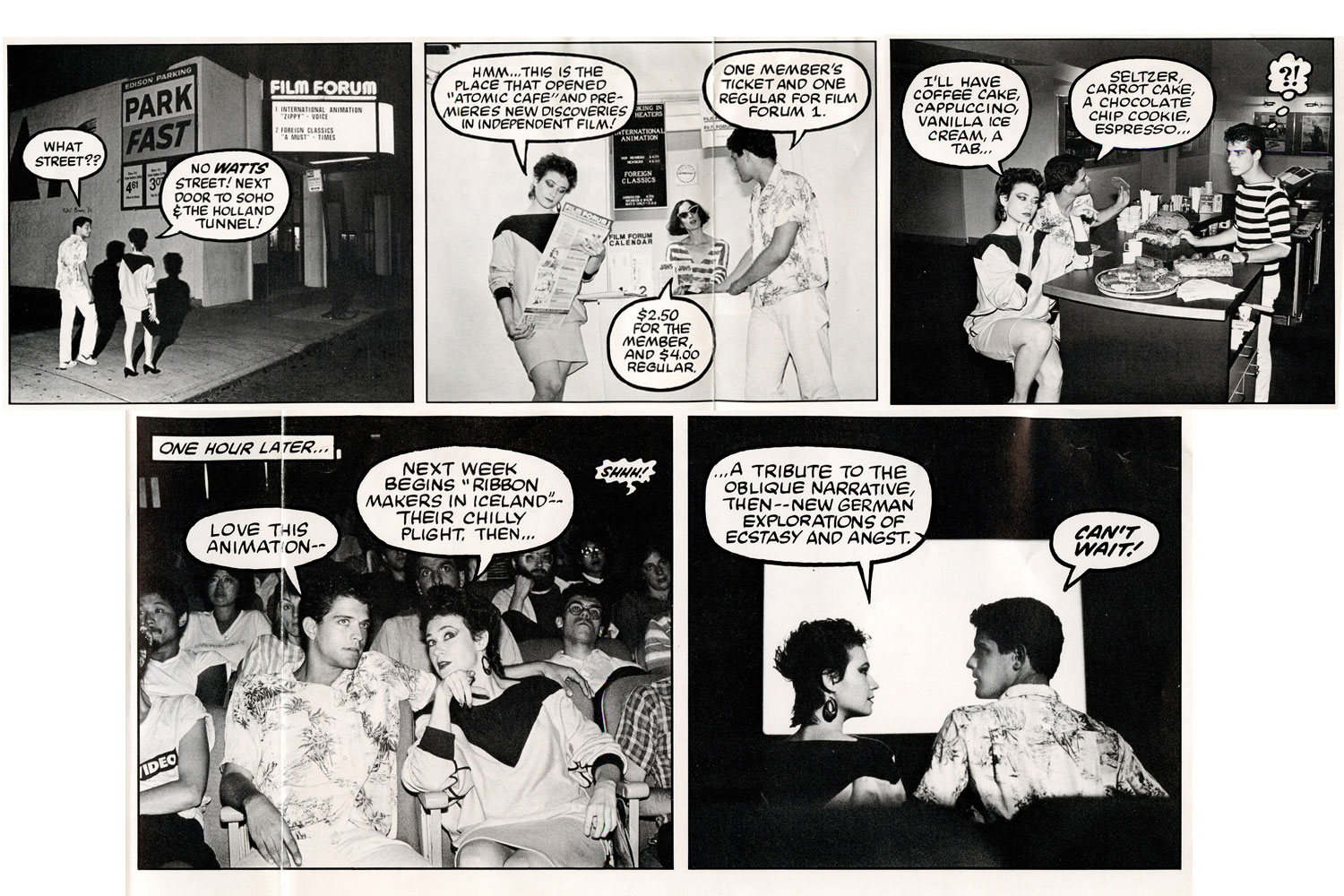 …is a 1982 fundraising mailer featuring actress Ann Magnuson, experimental eye shadow, duds by Patricia Field, and references to Tab and “German explorations of ecstasy and angst.” There was zero donor response…but I think it was worth every penny. 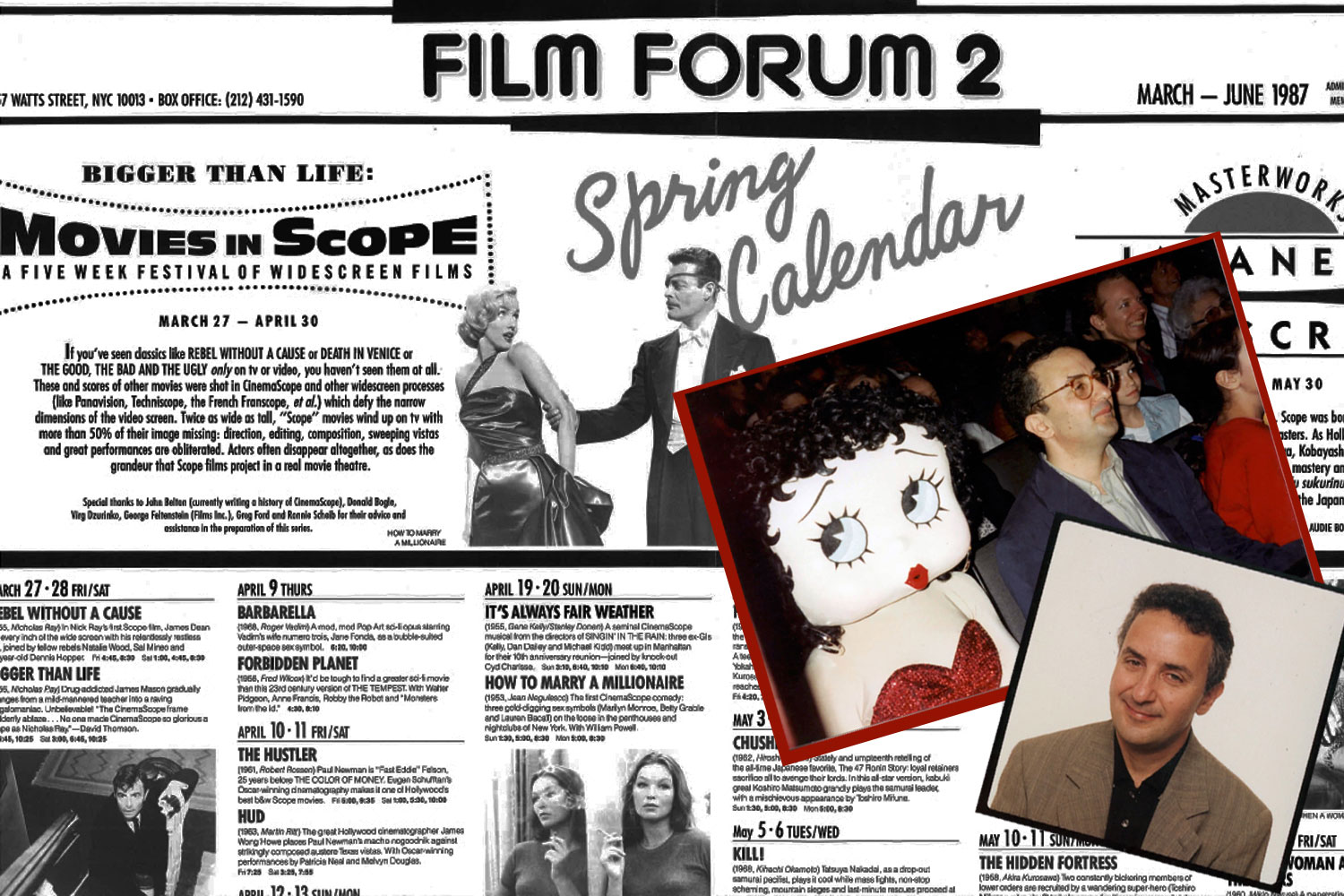 Enter Bruce Goldstein, a publicist and showman with an encyclopedic knowledge of film, thanks to the City’s repertory houses. In 1986, at a time when rep houses had disappeared due to VHS, Bruce began creating the next generation of repertory programming – via his signature calendars – the influence of which is hard to overstate. 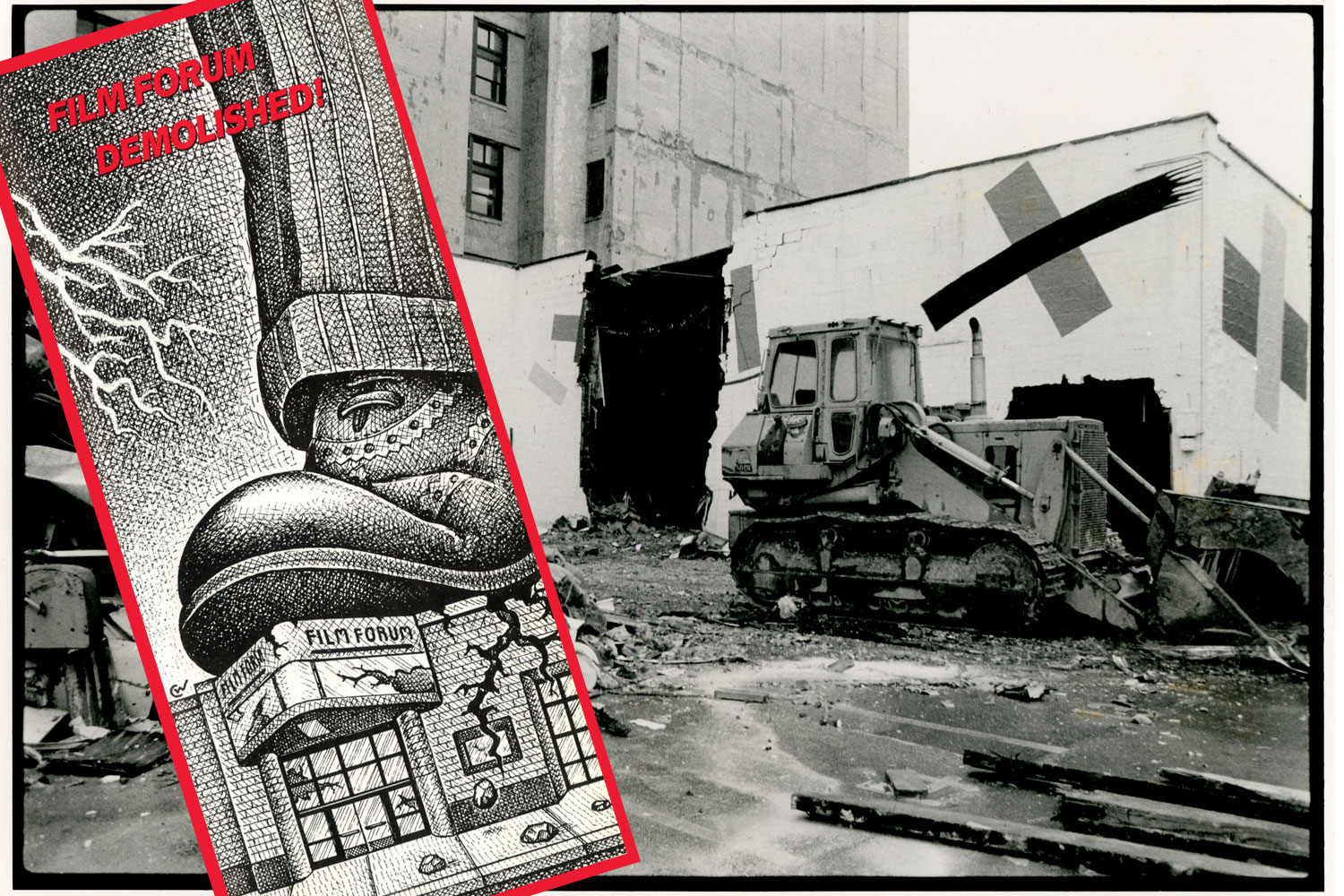 He wanted to tear the whole thing down! And build a 22-story office tower! Undeterred, Karen set out to find a new home for Film Forum. After an exhaustive real estate hunt, she finally found 10,000 square feet on the ground floor of an old printing building on Houston and Varick Streets – yet another approach to the Holland Tunnel. 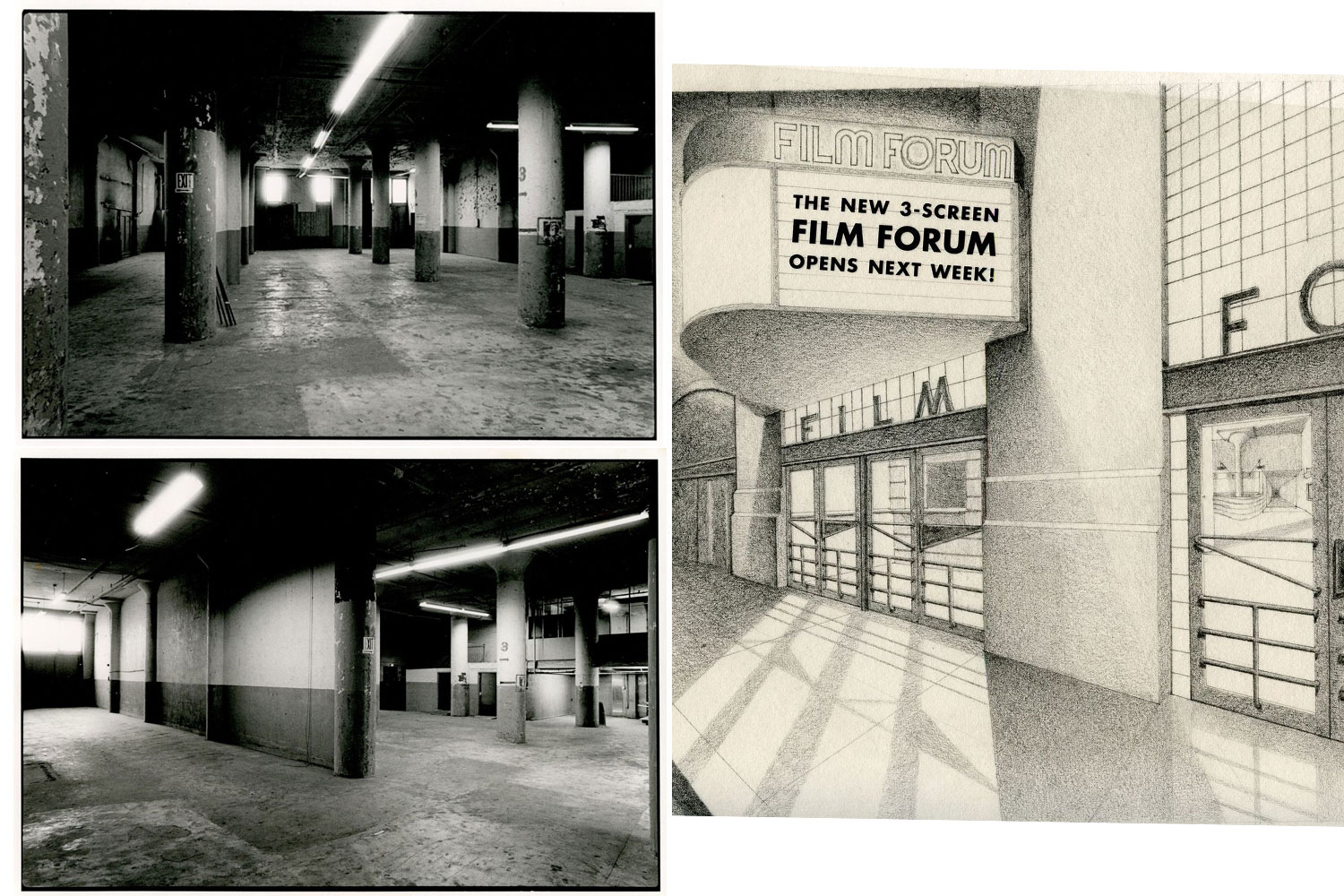 Aside from these massive columns that would need to be accommodated, the space was huge – enough to build a third theater – and the landlord offered a long-term lease. Karen set about her greatest task yet – raising over $3 million. She was successful, and on September 11, 1990, one year to the day from the Watts Street demolition… 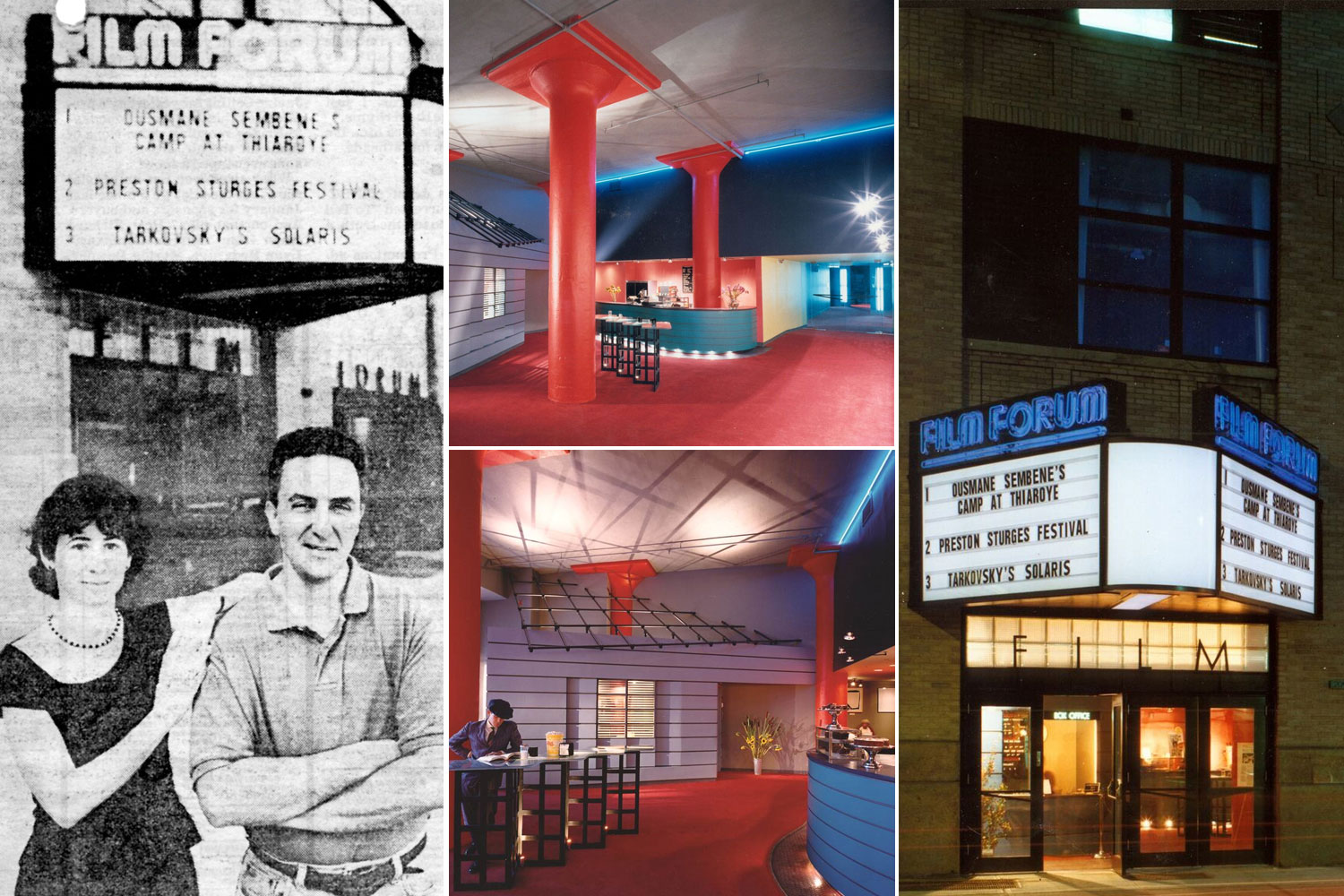 Film Forum re-opened in its current space on Houston Street. Here’s a great photo of Karen and Bruce from a piece on the opening in the New York Post. In this new space, Film Forum really came into its own. In the ensuing years, we have premiered some of the best and most influential independent films, both narrative and documentary. 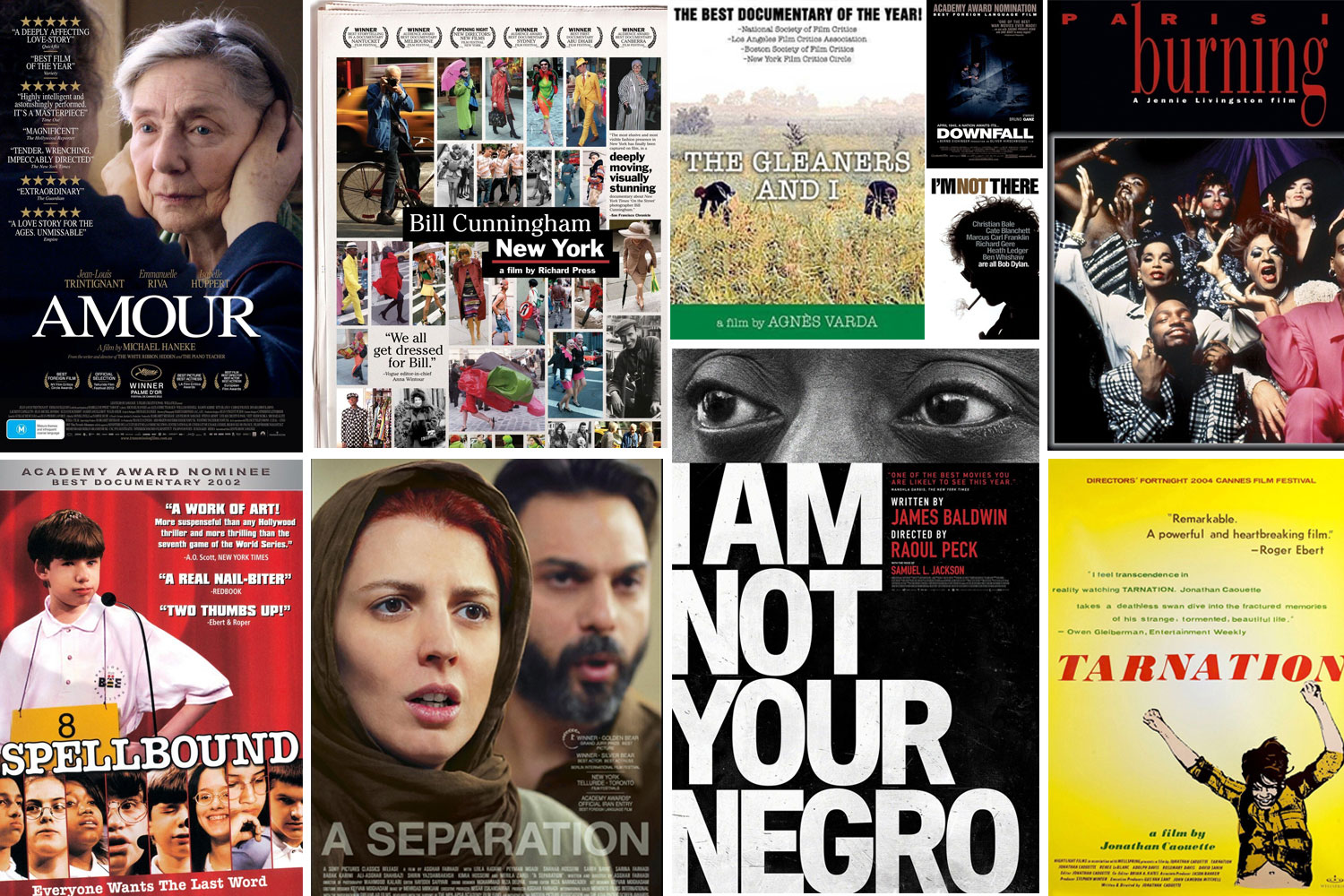 From American hits like PARIS IS BURNING, SPELLBOUND, I’M NOT THERE, and I AM NOT YOUR NEGRO – to great international films like A SEPARATION, AMOUR, and THE GLEANERS AND I. Karen and long-time premieres programmer, Mike Maggiore, have helped introduce US audiences to filmmakers like Gus van Sant, Lucrecia Martel, Roy Andersson, Kelly Reichardt, and many others. 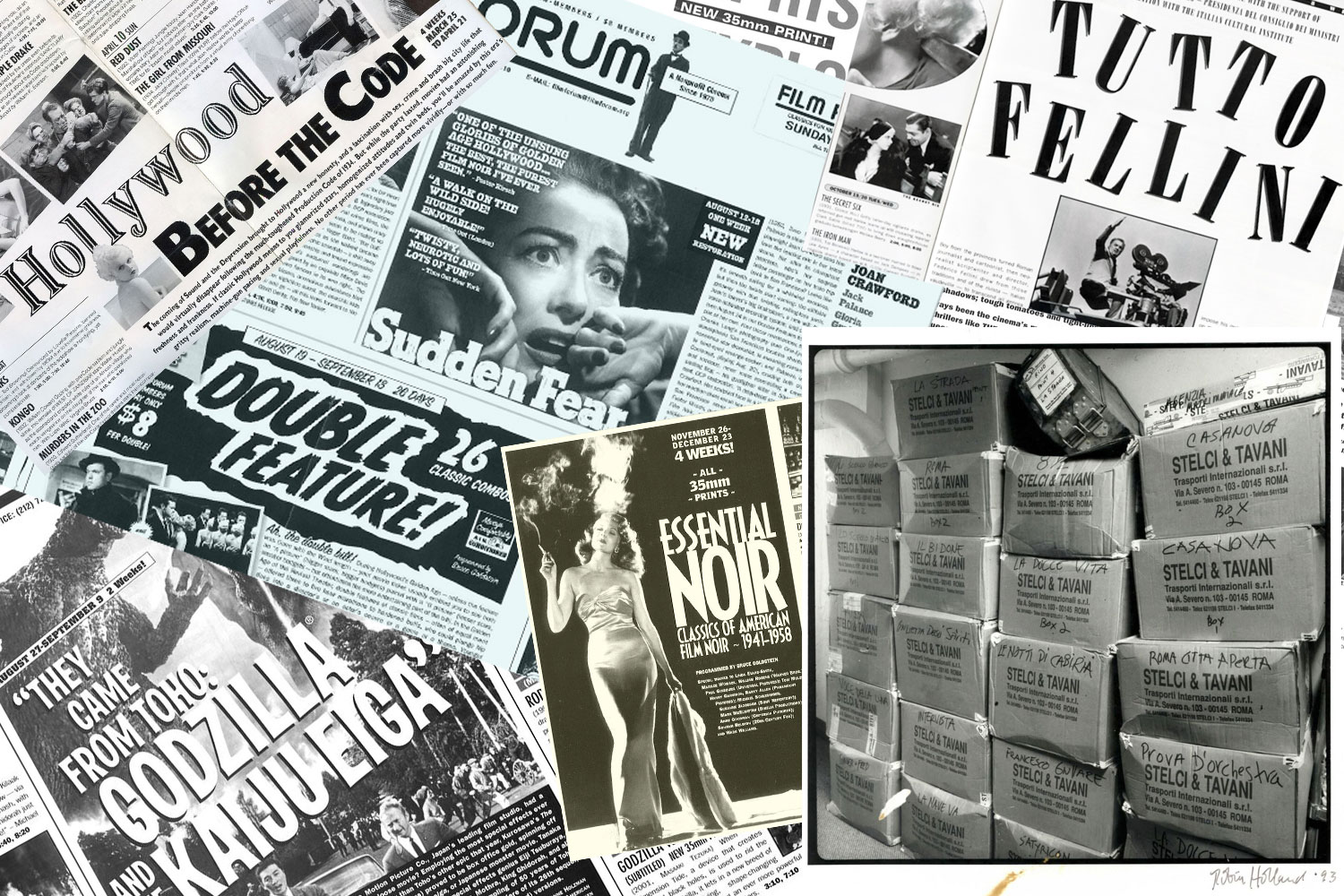 Meanwhile, Bruce has introduced audiences to many now-signature genres like pre-code, French new wave, film noir and many others. Bruce remains committed to projecting 35mm – showing over 250 prints last year alone. In fact, 1000 new prints that he had struck especially for Film Forum repertory runs are still in circulation. 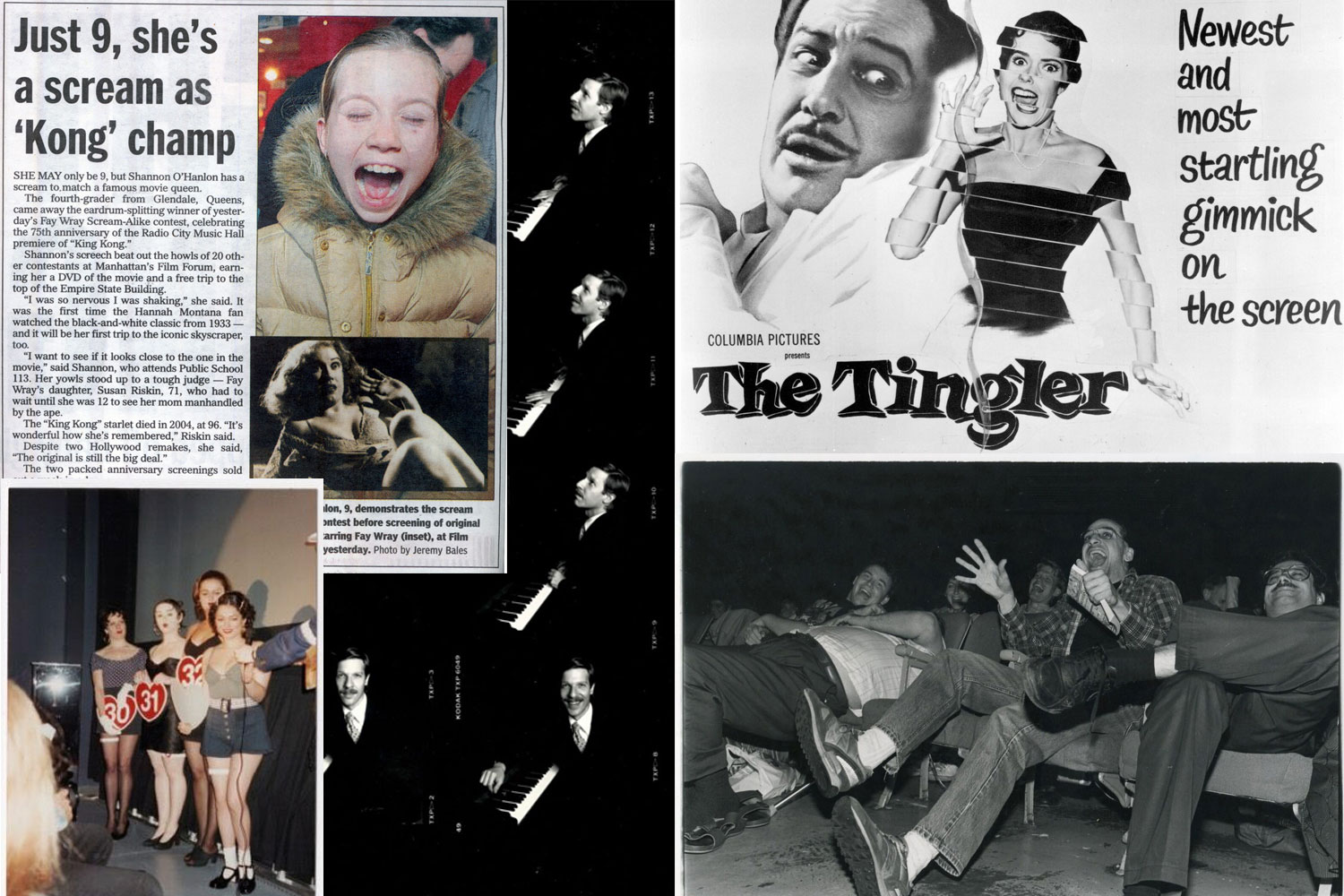 Bruce’s philosophy is “You can’t just show movies; every screening should be an event.” To that end, there’s always something new going on at the theater – whether it’s buzzing seats for William Castle’s THE TINGLER, special contests like Betty Boop lookalike and Fay Wray screamalike contests … And the most frequent and cherished special feature – silent films with live piano by the great Steve Sterner. 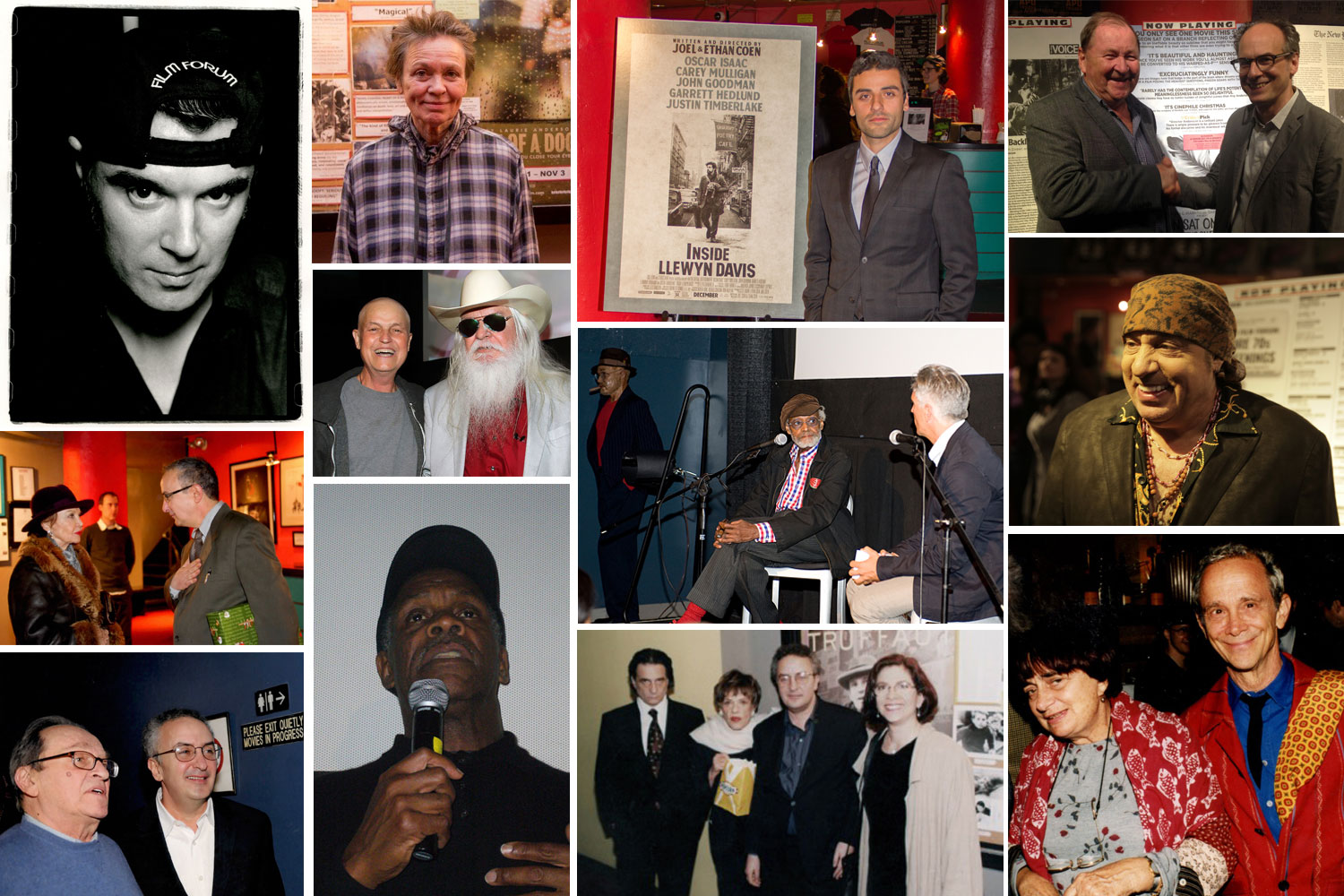 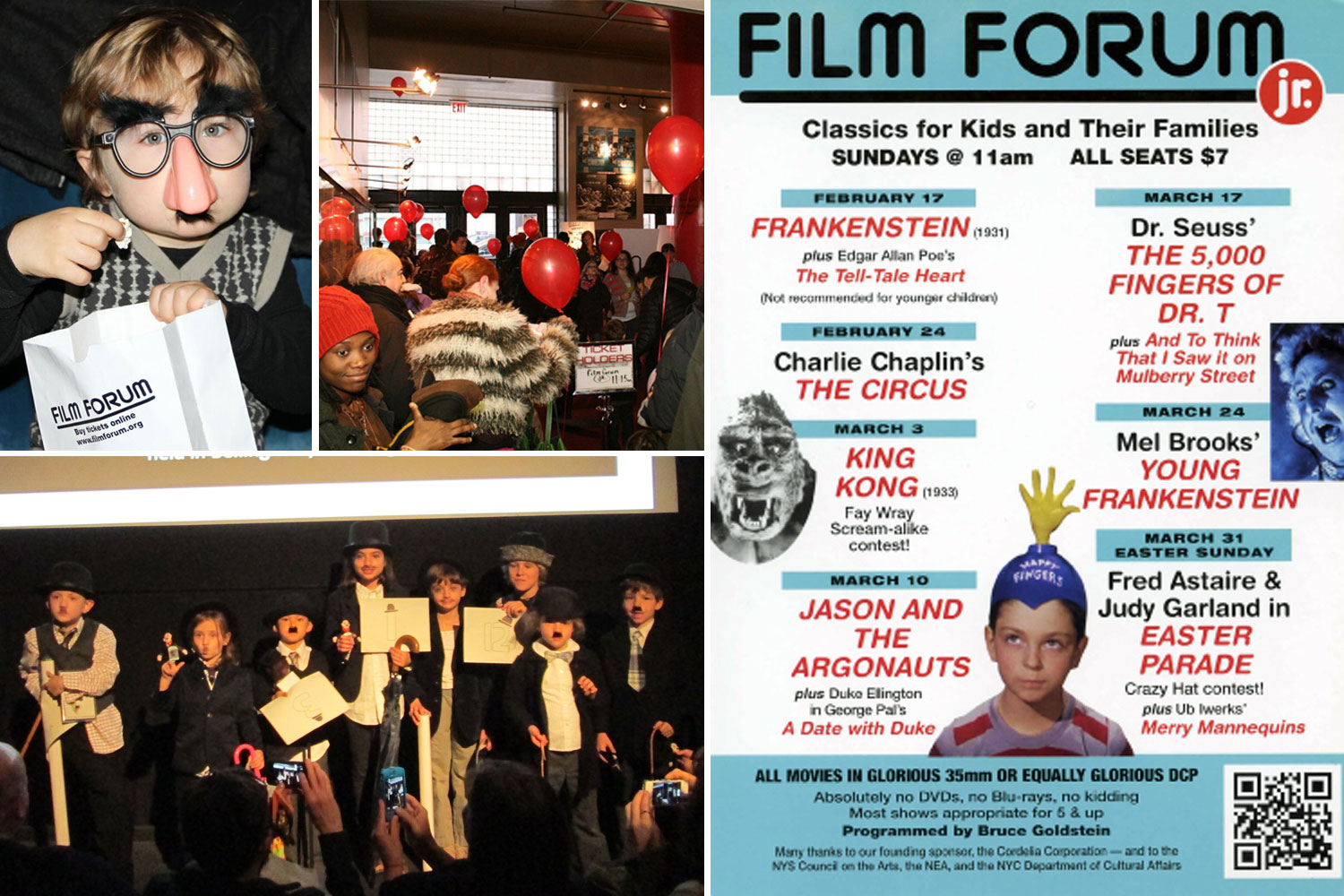 In 2013, Karen and Bruce started Film Forum, Jr. – a weekly Sunday morning series of classic movies for kids and their families that features some of Bruce’s signature special features – like Marx Brothers and Chaplin dress-up contests and here, at the series premiere, everyone got a red balloon – guess what movie we showed… 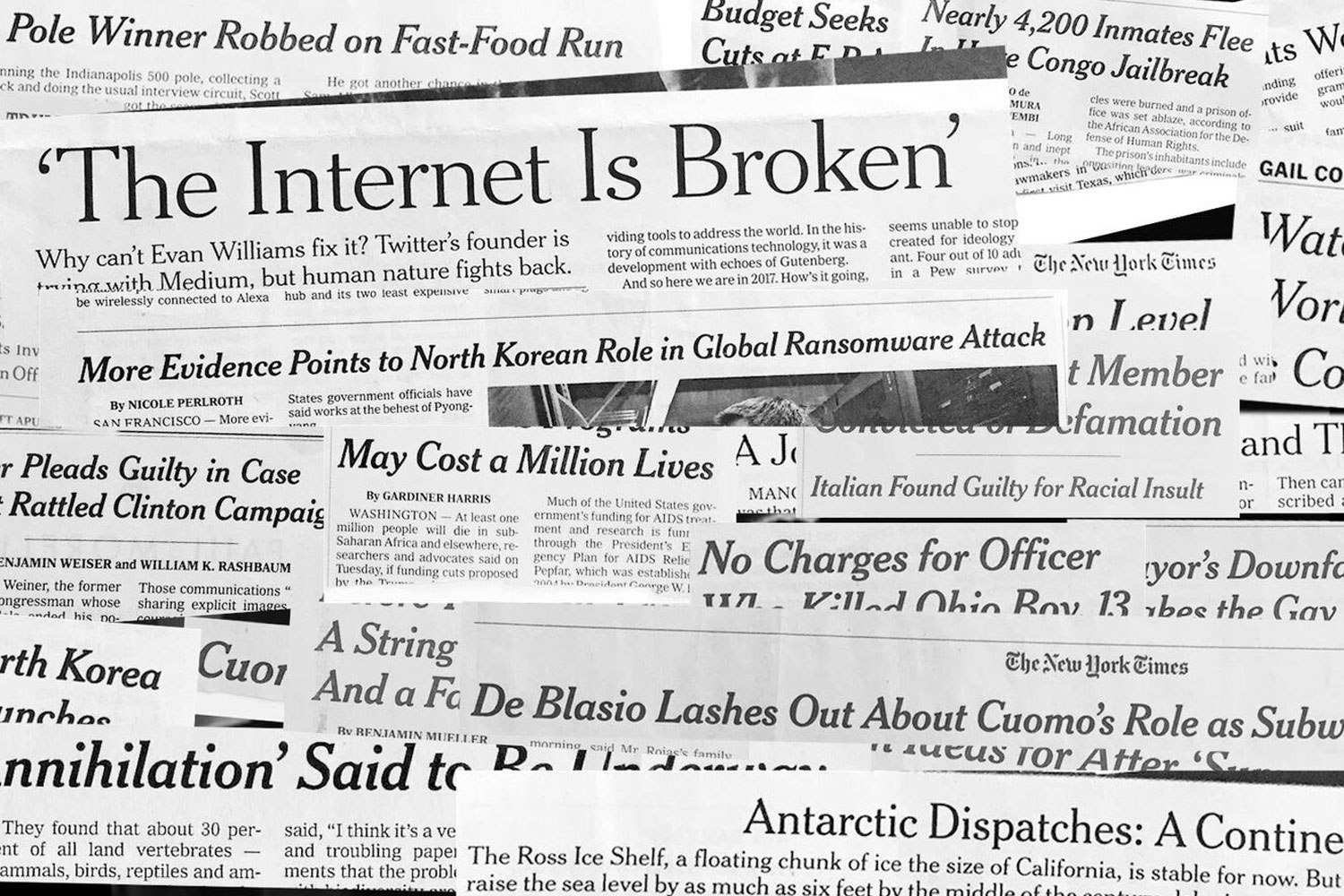 While all of this is happening, the world outside is getting more complicated – in general, but particularly for theatrical exhibitors. Film Forum has had to face the growing number of platforms for movie-viewing, an increasingly crowded marketplace, and the reality of operating in Manhattan where small businesses close constantly due to rent hikes. It sometimes seems like bad news all around. 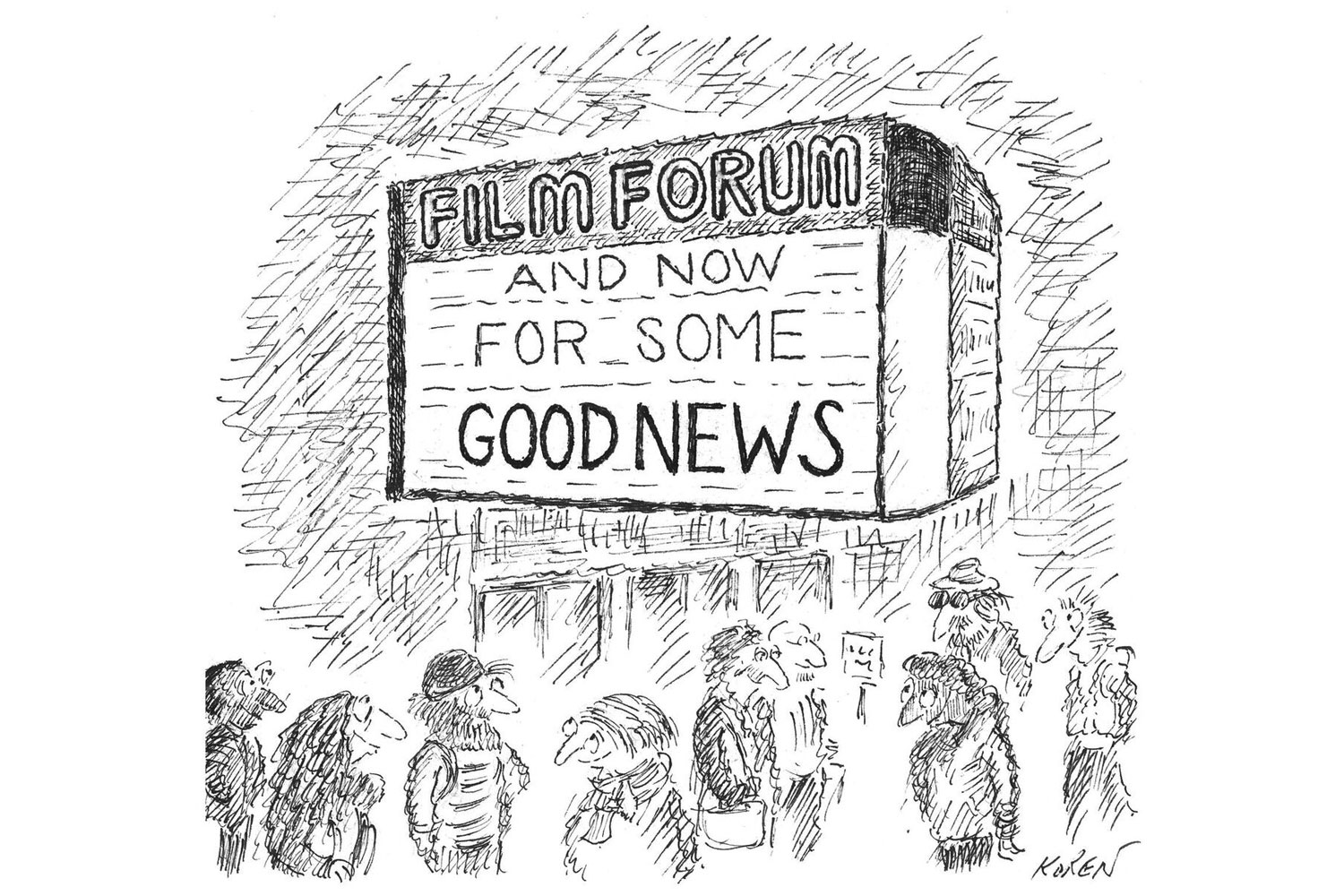 But thankfully we’ve got some good news! Film Forum signed a new lease through 2035, which includes taking over the adjoining loading dock to build a fourth theater! This expansion will allow Film Forum to be more comprehensive and flexible in its programming, and to show more films than ever before. 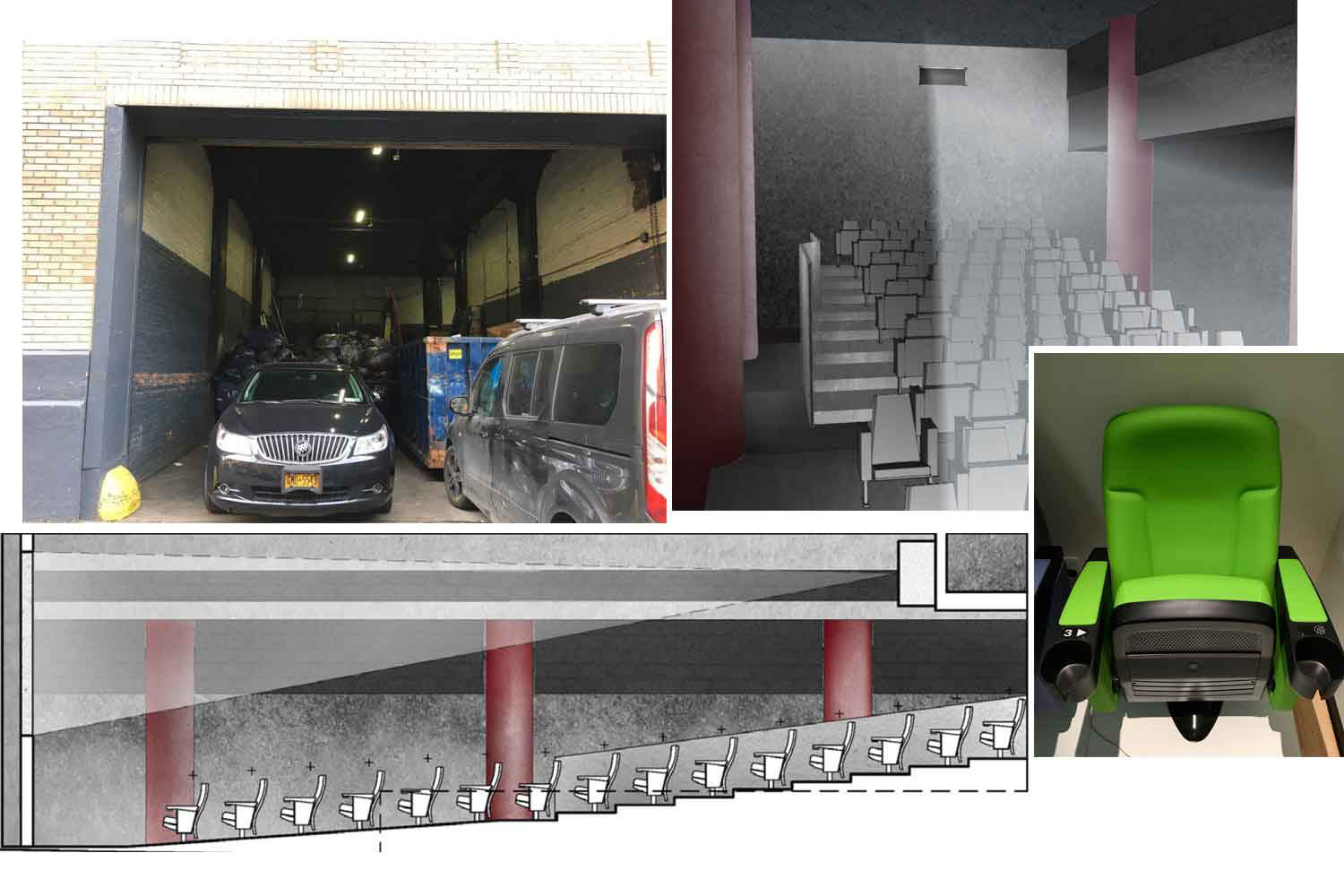 We are renovating our current space, with comfortable new seating (see above), more leg room, improved sightlines, and stadium seating. The fourth screen will be built from this glamorous loading dock that currently serves as a giant dumpster. One man’s trash is another woman’s cinema, I suppose.  Construction is underway, and the new and improved Film Forum will re-open this July 4th. 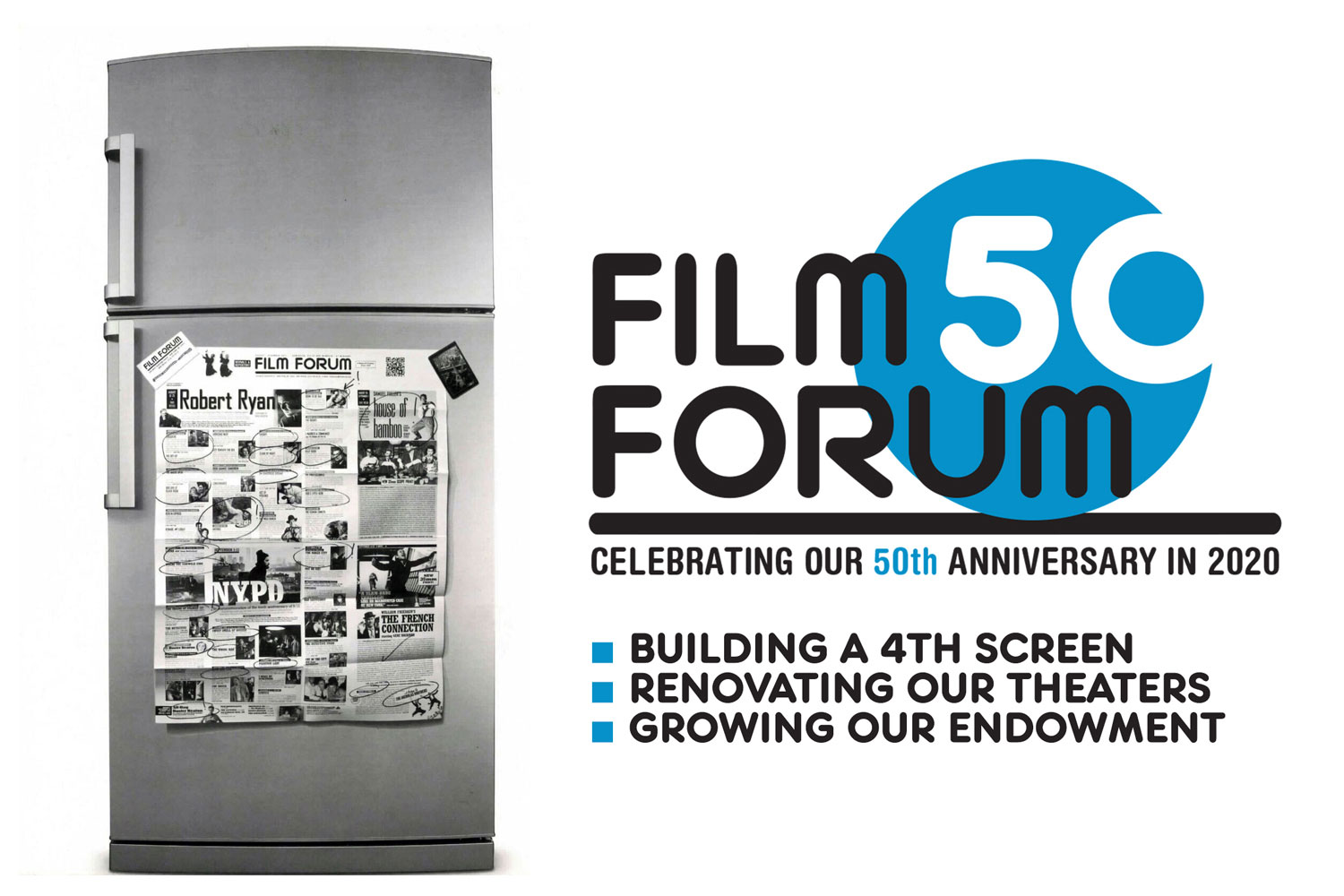