BLESSED EVENT with intro and outro by Bruce Goldstein

(1932, Roy Del Ruth) The apotheosis of Lee Tracy (Broadway’s original Hildy Johnson in The Front Page), here machine-gunning his way through a raucus send-up of Walter Winchell, and attaining utter delirium when he talks Allen Jenkins through his own imagined electrocution. This rare 35mm print from the Library of Congress is the most complete version ever screened – and has never been on television or home video. Introduced by Film Forum Repertory Program Director Bruce Goldstein, with a post-film look at how the picture was censored around the world. Approx. 85 min.

Based on a Broadway play by Manuel Self and Forrest Wilson, Blessed Event satirizes the cut-throat world of tabloid journalism in the early 1930s and the rise of Winchell (1897-1972), an ex-vaudevillian who, through his syndicated Hearst column, pioneered a lurid brand of “keyhole journalism” that’s still practiced today. Through his column and popular radio show, Winchell became famous for “Winchellisms” like “infanticipating” (expecting a baby) and “Renovating” (getting a divorce) that were rife with innuendo.

Lee Tracy, who stars as the Winchellesque columnist Alvin Roberts, had been a sensation playing reporter Hildy Johnson in the original 1927 Broadway production of Hecht & MacArthur’s The Front Page.  Though his performance in The Front Page had a huge impact on stage and screen acting, he was not cast in the 1930 movie version.

Says Goldstein, “With The Front Page, Tracy influenced future stars like James Cagney and Spencer Tracy, in much the same way as DeNiro and Pacino influenced their own generation. His high octane performance as Alvin Roberts in Blessed Event may be the closest thing we have on film to seeing his Hildy Johnson.”

Tracy’s screen career was derailed by an incident in Mexico in 1934.  Filming Viva Villa for MGM, he was accused of being drunk and disorderly and urinating on some Mexican soldiers from a balcony. Tracy’s MGM contract was terminated and he was thereafter relegated to B pictures.  He had a huge comeback in the early 1960s, when he was Oscar-nominated for his performance as the U.S. president in Gore Vidal’s The Best Man.

Goldstein pored over 70 pages of censorship records to find out exactly what in Blessed Event was censored in various countries and U.S. cities. “People think Hollywood’s adoption of its own Production Code put an end to individual censorship boards,” says Goldstein. “The Production Code Authority published its guidelines, but the individuals boards had their own set of rules.”

The 35mm pre-release version from the Library of Congress includes a 7-minute sequence that was cut by most censorship boards – it has never been on home video or television. Says Goldstein, “Just about every censorship board demanded the scene be cut. The odd thing is, it’s so innocent. I’d be hard put to explain why it was considered dirty at the time.” 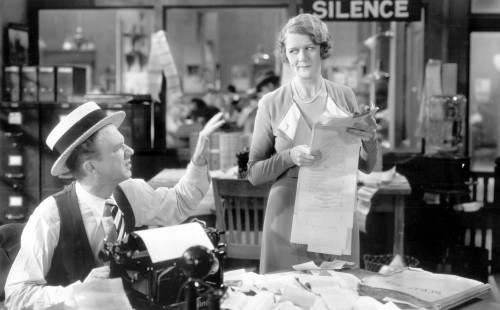