A STORY FROM CHIKAMATSU

(1954) In 18th century Kyoto, scrollmaker’s wife Kyōko Kagawa (Tokyo Story, Red Beard) and his top assistant Kazuo Hasegawa (Gate of Hell, An Actor’s Revenge) are driven together by the master’s meanness and jealousy, then confess their hidden love — but what happens now? Adapted from a bunraku play by Chikamatsu, the “Shakespeare of the puppet theater,” and boasting some of Mizoguchi’s most atmospheric staging, this is “Romeo and Juliet to Sansho the Bailiff’s King Lear” (David Shipman) — with the confession scene aboard a skiff adrift in the mist a highlight. Photographed by the great Kazuo Miyagawa (Rashomon, Yojimbo, etc.). 4K DCP restoration. Approx. 102 min.

Restored by Kadokawa Corporation and The Film Foundation at Cineric, Inc. in New York, sound by Audio Mechanics, with the cooperation of The Japan Foundation. Special thanks to Masahiro Miyajima and Martin Scorsese for their consultation.

“A dazzling array of conflicts and turnabouts, within which the ballad of Mohei and Osan exerts a pitiless mechanical force, like a trebuchet, that forever alters the lives of those around them.”
– Jaime N. Christley, The Village Voice

“Condenses a wide array of injustices—as well as an extraordinary romantic power—into its brisk and wide-ranging action... Mizoguchi films [the lovers’] devotion unto death with a fiercely defiant exaltation.”
– Richard Brody, The New Yorker

“A GREAT MASTERPIECE THAT ONLY MIZOGUCHI COULD HAVE MADE.”
– Akira Kurosawa

“The director’s realistic period style at its highest. Both the script and the direction pointed up the contemporary meaning in the old and traditional kabuki story of the fight of the oppressed lovers...A film of great subtlety, with any number of sensuous love scenes which never so much as show the lovers kissing. Instead, we see the movements they make in relation to each other, the slight glance which tells so much more than the actual embrace.”
– Donald Richie

“Marked by breathtaking refinement on every level.”
–Tony Rayns, Time Out (London)

“The performances are graceful, gentle, individualized and lovely. The music, which is mostly Japanese, ranks with the most expressive I have ever heard in a film. And the look of the film, indoors or out, is like a tribute to the traditions of Japanese genre painting and the pictorial logic of the old almost square-shaped movie screen.”
– Roger Greenspun, The New York Times 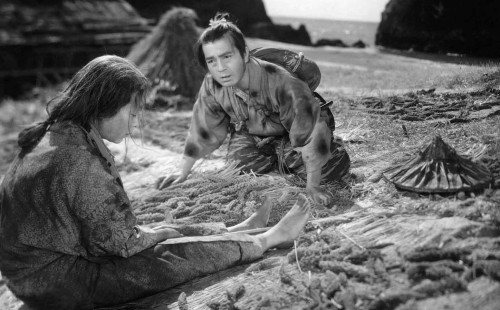