On the heels of the shocking guilty verdict in the Manila trial of renowned Filipino journalist Maria Ressa, A THOUSAND CUTS, from award-winning filmmaker Ramona S. Diaz (IMELDA, MOTHERLAND), takes an inside look at the key players in the escalating war between the media and the government in the Philippines and the ongoing threat to freedom of the press. In 2016, outsider candidate Rodrigo Duterte upset the political establishment by winning the presidency, vowing vengeance and violence. Within hours of taking office, bodies piled up in the streets. The country’s top online news site, Rappler (founded by Ressa), investigated the murders and revealed a government-sanctioned drug war targeting poor addicts instead of lucrative dealers. In an attempt to suppress independent reporting, Duterte unleashed a powerful disinformation campaign that spread like wildfire throughout social media. As each side digs in, we witness an epic, ongoing fight for integrity, truth, and the value of human life – a conflict that extends beyond the Philippines into our own divisive backyard.

Listen to an interview with filmmaker Ramona S. Diaz on Here’s the Thing with Alec Baldwin on WNYC.

“[This] pacy, engrossing, galvanizing film feels more like a political thriller than an off-the-cuff investigation into embattled journalism in the Philippines, but Ressa’s seemingly boundless energy, good humor, and intelligence make her basically a power plant for the manufacture of inspiration in embattled times.”
– Jessica Kiang, Variety 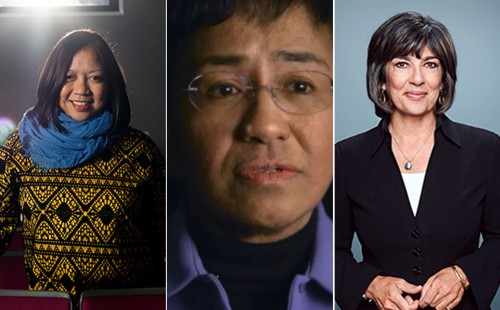