“The air in Delhi is so toxic and inhospitable to life itself that birds regularly fall from the sky like feathered rain. The creatures have done their best to compensate for other symptoms of pollution — one species began singing to each other at a higher pitch in order to pierce through the industrial noise, while another started using discarded cigarette butts as parasite repellent… ALL THAT BREATHES (is) a vital and transfixing work of urban ecology about two Muslim brothers who share an uncommonly holistic perspective of the world around them.” (David Ehrlich, IndieWire) Looking to the skies for a sense of release and purpose, they find the majestic black kite, an ecologically vital bird of prey, for whom they run a basement triage center; as meat-eaters, the birds are rejected by the city’s bird hospitals. A documentary paean to these brothers’ passion, tenacity, and tender concern for a bird more common than the NYC pigeon. ALL THAT BREATHES is the only film to be awarded both the Grand Jury Prize in World Documentary Competition (Sundance) and the L’Œil d’or documentary prize (Cannes).

“...an immersive, haunting documentary portrait… with intimacy, a great score and some fantastic macro cinematography… there is no denying the movie’s power or its subject; there’s also no denying the heartbreak of its images.”
– Manohla Dargis, The New York Times

“With the great documentary cinematographer Benjamin Bernhard, Sen creates images as sublime to our eyes as the sight of these huge black birds flying through a sky darkened with pollution are to the brothers.”
– Amy Taubin, Artforum

“Deftly examines the many socio-political dynamics the world must confront while also combating climate change. Gorgeous cinematography… captures various birds with arresting profiles. Up close portraits of birds of prey allow viewers to look the kites in the eyes. Ditto owls, hawks, and other marvelous feathered beings. This quietly understated approach invites one to see the vulnerability of all living creatures. The sight of flying birds isa wonder to behold.”
– Pat Mullen, POV Magazine

“At its most breathtaking when Sen stops to ponder how animals improvise to the city’s strange ecosystem.  Sen means to depict New Delhi as both a city and an ecosystem: a place that, for all its upheaval, remains achingly alive.”
– Ned Booth, The Playlist 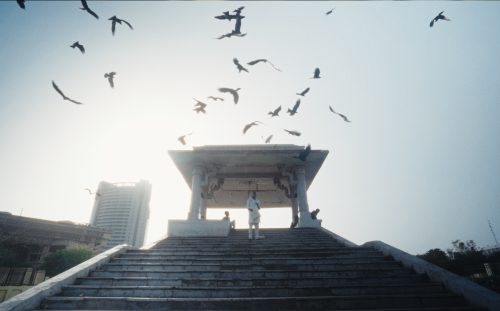 Q&As with ALL THAT BREATHES Filmmaker Shaunak Sen