(2012) Compared to his previous films, AMOUR is an altogether gentler look at humanity, an intimate drama of a cultured, sophisticated couple in their eighties – Jean-Louis Trintignant and Emmanuelle Riva – facing the inevitable ravages of life’s final chapters. Winner of the Palme d’Or at Cannes, his second, and nominated for 5 Academy Awards (winner for Best Foreign Language Film). With Isabelle Huppert. 35mm.

“Transfixing and extraordinarily touching, perhaps the most hauntingly honest movie about old age ever made.”
– Owen Gleiberman, Entertainment Weekly

“Brilliantly directed with an atypically tender touch by the Austrian director Michael Haneke, this story about an octogenarian husband and wife facing their mortality – beautifully played by the French actors Jean-Louis Trintignant and Emmanuelle Riva – had left audiences stunned with its artistry and depth of feeling.”
– Manohla Dargis, The New York Times

“(A) beautiful and devastating portrait of the moment when one’s autumn years turn dark and wintry.  Anyone doubting that Haneke had the capacity to demonstrate genuine compassion for his characters will be startled to see that yes, the man behind both FUNNY GAMES can do emotional as well as he does cerebral.”
– David Fear, Time Out New York 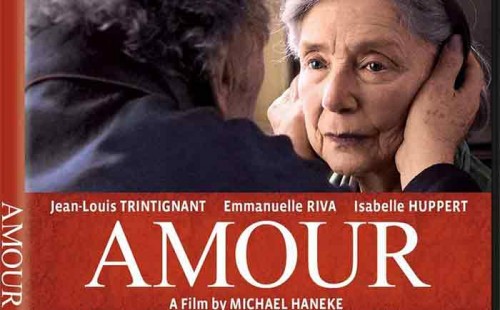