Post-screening Q&A with star Keir Dullea (via Zoom) moderated by Foster Hirsch (in person), author of Otto Preminger: The Man Who Would Be King.

Followed by a book signing of Otto Preminger: The Man Who Would Be King with Foster Hirsch. On sale at Film Forum concession.

(1965, Otto Preminger) Carol Lynley’s suspenseful search for her missing daughter – but does she exist? – is aided by doubting brother Keir Dullea (2001: A Space Odyssey) and inspector Laurence Olivier. London location shooting and a memorable study-in-perversion cameo by Noël Coward – and The Zombies! DCP. 107 minutes.

“Preminger approaches the mystery of human irrationality and emotion through logic and detachment; the effect is stingingly poignant. One of his most darkly poetic and wrenching films, a reflective mid-60s return to the ghostly film noir style he developed at Fox in the 40s.”
– Dave Kehr, Chicago Reader

“The cast alone is worth the price of admission.”
– Leslie Halliwell

“The film’s charge lies in Preminger’s view of a jolting, disoriented age of rock and roll. The mental chaos of the time is reflected in the behavior of the local solipsistic eccentrics (including a randy raconteur, played by Noël Coward), the nightmarish images, the backdrop of student protest and political crisis, and the frenzied soundtrack, which features the music of the Zombies.”
– Richard Brody, The New Yorker 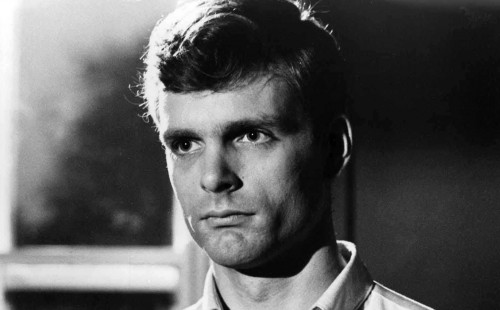