DANCING THE TWIST IN BAMAKO

The 1960s were a time of change everywhere, and that includes Bamako, the capital city of Mali, a nation only recently independent from French colonial rule. DANCING THE TWIST IN BAMAKO is a romance fraught with the drama of political change, infused with the musical energy of that decade. Samba, a young, idealistic socialist, works toward creating a more just nation by day and dances with girlfriend Lara to the Beach Boys, Otis Redding, and the Supremes by night. The film’s sensibility is inspired by the vibrant images, patterns, and compositions of famed Malian photographer, Malick Sidibé. Lara’s orange silk dress and Samba’s dazzling white suit, shot against the striped backdrop of their dance club and the black and white checked dance floor they cut up — all suggest that change is coming rapidly, that life is for living.

“A beautiful romantic love story. A dive into the past, punctuated by a multitude of hits from the early 60s whose fragrance of effervescent happiness is tinged with nostalgia and tragedy.”
– Fabien Lemercier, Cineuropa

DANCING THE TWIST IN BAMAKO 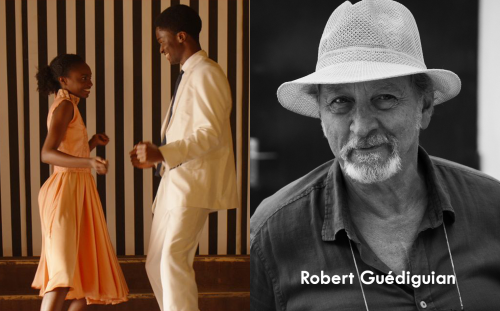 Q&A with DANCING THE TWIST IN BAMAKO Filmmaker Robert Guédiguian

Q&A with DANCING THE TWIST IN BAMAKO Filmmaker Robert Guédiguian