Lake Como, Northern Italy, 1944. Partisan Sordi (Fellini’s THE WHITE SHIEK and I VITELLONI, etc.), on the run from the Germans, is sheltered, nursed and romanced in an abandoned mill by local innkeeper’s daughter Massari (L’AVVENTURA, MURMUR OF THE HEART, CHRIST STOPPED AT EBOLI), whisking her to Rome after the war to share his shabby flat.

The story of an on-again, off-again, then on-again relationship, told against 17 years of Italian history, from the last year of World War II to the economic boom of the early 1960s – the liberation of Rome, the country’s switch from monarchy to republic, the first post-Fascist general election, etc. – as Sordi’s commitment to the Cause gets in the way of his earning a decent living for Massari and their newborn son.

In Italy, UNA VITA DIFFICILE is cherished as one of the great works of commedia all’italiana – a Golden Age of movies from the 50s and 60s that includes Monicelli’s BIG DEAL ON MADONNA STREET, Germi’s DIVORCE ITALIAN STYLE, Lattuada’s MAFIOSO, De Sica’s YESTERDAY, TODAY AND TOMORROW, and Risi’s own IL SORPASSO. While these and others were major arthouse hits in the U.S., UNA VITA DIFFICILE was inexplicably never released here.  The new restoration from Studiocanal and Rialto Pictures includes new subtitles by Bruce Goldstein and Fiamma Arditi.

One of Italy’s most beloved stars, Alberto Sordi began his film career as the Italian dubbing voice of Hollywood actors, including Cary Grant, and became famous as the Italian voice of Oliver Hardy.  After appearing as the Valentinoesque title character of Federico Fellini’s THE WHITE SHIEK, Sordi had his breakthrough role in Fellini’s I VITELLONI, as one of the aimless young men of the title (which also included Sordi’s UNA VITA DIFFICILE co-star Franco Fabrizi).

Though never an international star like contemporaries Marcello Mastroianni and Vittorio Gassman, Sordi was one of Italy’s biggest box office attractions, starring in over 150 movies (19 directed by himself).  Along with Anna Magnani, Sordi was the quintessential Roman, affectionately known by his public as “Albertone.” At his funeral in 2013, an estimated crowd of close to a million gathered outside the church to pay their last respects.

UNA VITA DIFFICILE’s many comic highlights include a Banquet from Hell at the table of an ancient principessa and a riotous sequence at Cinecittà, with guest appearances by superstars Vittorio Gassman (who’d star in Risi’s IL SORPASSO a year later) and Silvana Mangano (best known as star of the neo-realist classic BITTER RICE and wife of producer Dino De Laurentiis), along with director Alessandro Blasetti, known as “the father of Italian cinema.”

Often called “Italy’s Billy Wilder,” Dino Risi’s film career began as an assistant to Mario Soldati and Alberto Lattuada. The introduction to a 2016/2017 Risi retrospective at MoMA described him “a caricaturist in the vein of Honoré Daumier, using exaggerated grotesqueries to sweeten the bitterness of his social satire. His films are populated by a rogue’s gallery of shamelessly lovable commedia all’Italiana types in the inimitable guises of some of the era’s greatest actors: Alberto Sordi, Vittorio Gassman, Nino Manfredi, Ugo Tognazzi, and Sophia Loren.” Risi was awarded an Honorary Golden Lion at the 2002 Venice Film Festival for his life’s work.

UNA VITA DIFFICILE was scanned in 4K from the original negative by Istituto Luce, Rome. The restoration was carried out at VDM by StudioCanal.

“A STELLAR SPECIMEN OF COMMEDIA ALL’ITALIANA BY A TRUE MAESTRO OF THE FORM. Pulsate[s] with the breathlessness and disorientation of a country simultaneously grappling with the past and speeding toward a confusing future….  Belongs in the company of Fellini’s La Dolce Vita and Risi’s Il Sorpasso.  It also stands by itself as an exuberant bad time, a pity party that has no business being so much fun.”
–  A.O. Scott, The New York Times
Read the full review here

"It sounds absurd to even contemplate: an unreleased 1961 epic romance starring the legendary Alberto Sordi that tackles the decades after WWII — a mixture of sentiment and grand historic sweep that the Italians always did so well — that’s somehow just getting a U.S. release."
– Bilge Ebiri, New York Magazine

“Risi’s deft seriocomic panorama, from Mussolini’s fall to the rise of the postwar Roman oligarchy… Alberto Sordi triumphs at jet-black comedy when the antihero fails as an idealist, a husband, even as a sell-out. The closest America has come to Sordi is Jack Lemmon and Walter Matthau in their prime, rolled into one.”
– Michael Sragow, Air Mail
Read the full review here.

“A MASTERPIECE… Risi unfolds twenty years of national life in an unforgettable picture that was hailed by Italian critics.”
– Archivist/historian Lorenzo Codelli 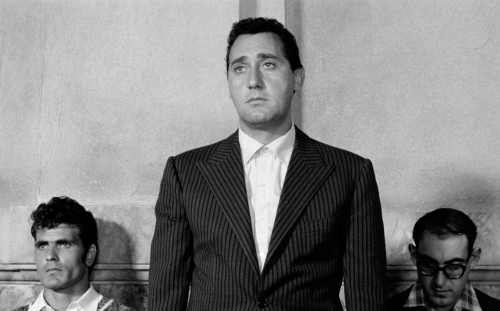