“History has taught Chinese people a lesson: Dare to stand up to the Party, and you will suffer.” – Daxiong, famed comics artist (Justice League of America and Star Wars). This year marks the 20th anniversary of Falun Gong’s daring hijacking of a Chinese state television station. For decades, Beijing has branded Falun Gong as a dangerous cult, but its members maintain that it is a spiritual movement based on moral teachings and meditation, with roots in Buddhism. In the 1990s they had tens of millions of adherents in China; in 1999, the government banned the movement.  Using elegant, dazzling animation by Daxiong (himself a Falun Gong adherent), ETERNAL SPRING tells the astonishing true story of the movement’s takeover of a television station, followed by the arrest, torture, and imprisonment of thousands. For those who know Falun Gong only as the publisher of the right-wing paper The Epoch Times, this film will be an eye-opener, an inspiring portrait of high-tech group defiance in the face of overwhelming state oppression, brutality, and misinformation.

With support from the Richard Brick, Geri Ashur, and Sara Bershtel Fund for Social Justice Documentaries.

“Jason Loftus’s ingenious animated doc. Recreates the narrative of the hijacking in vivid detail. Daxiong’s aesthetic propels the story and navigates a complex political situation… (with) tales of ordinary heroes who stood up for freedom of expression.  Mixes animation with straightforward testimonials and verite footage of Daxiong illustrating the tale. ETERNAL SPRING recreates the protest with gripping detail. Artfully articulates a people’s hunger for change.”
– Patrick Mullen, POV Magazine

“Recounts the dramatic events leading to the TV hijacking and its violent aftermath.Told through the eyes of Falun Gong practitioner and acclaimed comic book artist Daxiong… Images coalesce beautifully to depict the people’s subjective interpretations of the events as well as the intensely intimate experiences of fear, trauma, and nostalgia for the lost homeland… A list of gross human rights violations perpetrated by China’s ruling Community Party against Falun Gong practitioners is long and shocking. (The film) stirs intriguing debates about political propaganda and the nature and extent of religious freedom.”
– Severa Pan, Modern Times Review

“A harrowing journey (and) excellent documentary. An essential and integral watch. Unmissable. Riveting viewing. This is a tremendous film.”
–  Upcoming On Screen 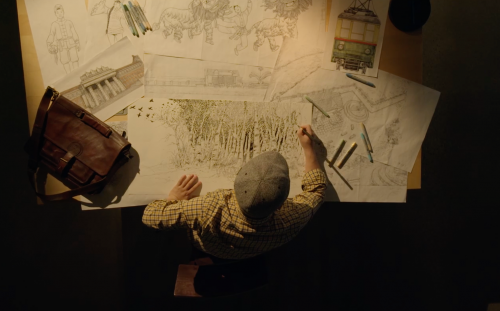