All screenings followed by a post-film talk with THE CONVERSATION sound designer WALTER MURCH and author/critic MICHAEL SRAGOW, recorded especially for our run.

(1974) “He’d kill us if he had the chance.” Francis Ford Coppola’s masterpiece of sustained suspense and paranoia, starring Gene Hackman as a loner surveillance expert. Hackman’s Harry Caul bugs a couple in San Francisco’s teeming Union Square. But why?  A recluse living alone in an empty apartment, Caul plays saxophone to jazz records and broods over the deaths he may have been responsible for. And as he keeps tinkering with the recordings, he gets bugged himself, his tapes are stolen, his landlord effortlessly penetrates his security to leave a note – and then, to his horror, he figures it out. The Conversation’s stellar cast also includes John Cazale (Fredo of the first two Godfather films), as Harry’s dim-witted assistant, and a supporting cast of soon-to-be-stars, including Frederic Forrest (Apocalypse Now), Cindy Williams (Laverne & Shirley), Teri Garr (Young Frankenstein), and a ridiculously young Harrison Ford (three years before Star Wars). 35mm. Approx. 113 min.

Listen to critic Michael Sragow talking about The Conversation on the Air Mail podcast (starts at approx. 11:30). 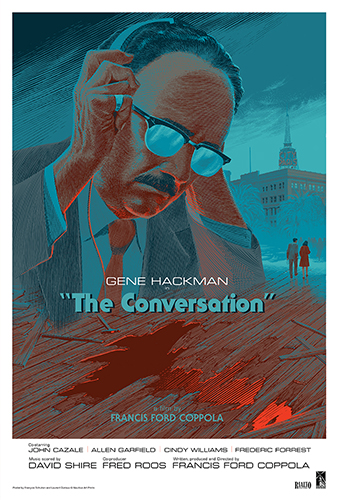 “An immaculate thriller, a study in paranoia and loneliness, partly inspired by Antonioni’s Blow-Up, and released as the Watergate scandal was unfolding, [with] one of Gene Hackman’s greatest performances.”
– Philip French, The Guardian

“When it premiered, the movie’s technological tricks and sleek corporate backdrop evoked Watergate. Thanks to Walter Murch’s keen, intuitive sound montage and Hackman’s clammy, subtle performance, captures a more elusive and universal fear—that of losing the power to respond, emotionally and morally, to the evidence of one’s own senses.”
– Michael Sragow, The New Yorker

“Harry ranks with Willy Loman in Death of a Salesman or the pathetic captives of the middle class in John Cassevetes’ Faces.”
– Roger Ebert

“Remarkably ambitious and serious – a Hitchcockian thriller, a first-rate psychological portrait of a distinctive modern villain, and a bitter attack on American business values… all in one movie.”
– David Denby