Poet/singer/songwriter Leonard Cohen (1934-2016) spent over 7 years writing “Hallelujah," initially an obscure track on an early 80s album rejected by his record label (“Look, Leonard, we know you’re great – but we’re not sure you’re any good”). Yet it enjoyed a new life in 1991 after being covered by John Cale (Cohen shared over 100 unused verses with him), then Jeff Buckley on his Grace album -- and evolved through countless versions to become one of the most beloved songs of all time. Drawing from rare and never-before-seen archival materials, directors Dan Geller and Dayna Goldfine (BALLETS RUSSES) meticulously trace the career of the restless Canadian artist as they detail the unlikely path of his famous composition, the meaning of which has transformed with each popular cover version.

Presented with support from the Roy Lichtenstein Foundation Fund

Critic’s Pick. “A source of illumination for both die-hard and casual fans…‘Hallelujah’ is his great anthem of religious ecstasy and sexual longing… A fascinating study in the mechanics and metaphysics of pop-culture memory… (Cohen) is, throughout, a vivid, complicated presence — witty, melancholy, well-dressed and soft-spoken. By the end, he radiates wisdom, gratitude, and the kind of fulfillment whose elusiveness had always been his great subject.”
-A.O. Scott, The New York Times
Read the full review.

“This majestic, almost symphonic documentary… an account of how ‘Hallelujah’ has become a receptacle into which new generations of singers pour their musical souls. Like the song, whose title contains an affirmation…the film affirms the value and power of making art.”
– Joe Morgenstern, The Wall Street Journal

“A unique and gratifying pop-music documentary. The story of Leonard Cohen, and how his ‘Hallelujah’ became the world’s ‘Hallelujah.’ It’s epic and lovely and trancelike: a hymn cast in a pop idiom. (Cohen) may have been the ultimate idiosyncratic pop-star-who-wasn’t-really-a-pop-star- except-that-he-so-was…. Cohen himself was sexy in a rapt Canadian Pacino-meets-Serge Gainsbourg way - a clean-cut troubadour, a professor of lyric enchantment. A music doc this rich… one about how a quiet artist, without planning to, created a song heard round the world.”
– Owen Gleiberman, Variety

“Explores the mysterious beauty of Leonard Cohen through that one song. An affectionate and open-hearted tribute to Cohen.”
– Steve Pond, The Wrap 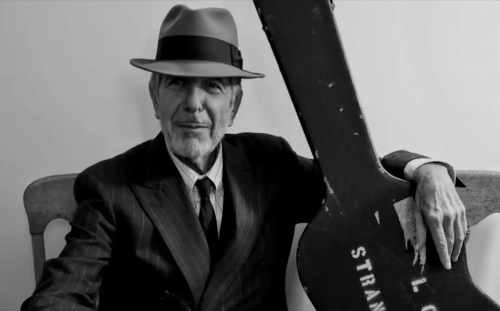