Part of the series
Virtual Cinema

OLIVER SACKS: HIS OWN LIFE

Oliver Sacks (1933-2015), termed “the poet laureate of medicine” by The New York Times, was a man of infinite compassion, whose scientific and literary accomplishments made him the first public intellectual in the field of medicine and a revered figure. London-born, to an Orthodox Jewish family, and eccentric from his earliest days (his first friend was the periodic table!), Sacks was dogged by homophobia (his mother called him “an abomination”), self-destructiveness (including extensive drug use as a young man), obsessions with swimming, motorcycling, and body-building -- and for many years the hostility of the medical establishment. Ironically, it was the Robin Williams/Robert De Niro Hollywood movie of his book, Awakenings, that led to his acceptance by the scientific community. As an expert in Asperger’s and Tourette’s syndromes, Parkinson’s disease, colorblindness, migraines, and a panoply of rare neurological conditions – Sacks wrote books that turned case histories into compelling stories of living, breathing people. Ric Burns’s documentary, which draws upon extensive interviews with Sacks made just after learning that he is dying, does justice to a fascinating, multi-faceted personality: a great man who was also a profoundly good one.

“A portrait at once tender and thrilling, a movie that presents us with a man who led an eccentrically defiant, at times reckless existence… a wanderer in the body of a clinician, like Jack Kerouac crossed with Jonas Salk. He was that rare if not unique thing, a scientific navigator of the soul. Penny Marshall’s film AWAKENINGS… caught Sacks’ audacity. What he saw, like a beacon, were the inner lives of his patients. Sacks’s scientifically wired empathy… was a gift that descended from his own sacred demons. The still ebullient Oliver holds court… a melodious one-world-British-Jewish form of verbal play.”
– Owen Gleiberman, Variety

“Insightful. A rare look inside the mind of the world’s most famous cognitive scientist. The private Sacks sat down with Burns for a series of filmed interviews in his apartment in New York - 80 hours over five days - talking about this life. Sacks shares intimate details of his battles with growing up gay in 1950s England, drug addiction, homophobia and a medical establishment that accepted his work only decades after the fact.”
– Patrick Hipes, Screen Daily

“Oliver Sacks, the neurologist and acclaimed author who explored some of the brain’s strangest pathways in best-selling case histories like ‘The Man Who Mistook His Wife for a Hat,’ using his patients’ disorders as starting points fo eloquent meditations on consciousness and the human condition, died on Sunday…  As a medical doctor and a writer, Dr. Sacks achieved a level of popular renown rare among scientists… He was also a man of contradictions: candid and guarded, gregarious and solitary, clinical and compassionate, scientific and poetic, British and almost American.”
– Gregory Cowles, The New York Times obituary for Sacks (August 30, 2015)

OLIVER SACKS: HIS OWN LIFE 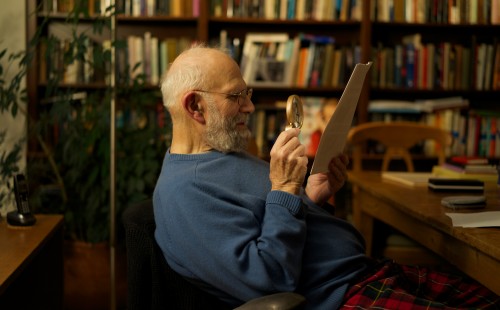