(1953) “Are you waving the flag at me?,” sneers pickpocket Richard Widmark at cops and Feds on the trail of that microfilm he’s lifted on the subway from Jean Peters’ purse — after all, she was messengering it, albeit unwittingly, to the REDS! But then, in Widmark’s world, “Who cares? Your money’s as good as anybody else’s”; while professional snitch Thlema Ritter thoughtfully pulls out a price chart when called on for a fingering. (This was Ritter’s fourth straight Supporting Actress Oscar nomination —her sixth was for Birdman of Alcatraz; she never won.) Peters herself — soon to be Mrs. Howard Hughes in real life — is everybody’s patsy, blackmailed into the mule deal by sweaty ex-“boyfriend” Richard Kiley with promise of a clean final breakup, robbed twice, cold-cocked, hit with a beer-in-the-face wakeup call, and rag-dolled around an apartment; and shot. But finally, as Ritter says, “Even in our crummy line of business, you gotta draw the line somewhere.” Vintage Fuller hard-boiled pulp, with final chin-bouncing-on-each-step subway station showdown. (Released the year Stalin died, Pickup’s Cold War attitudes horrified Gallic Fuller fans; in the French dubbing, the whole thing was changed to a drug deal.) Approx. 80 min. DCP. 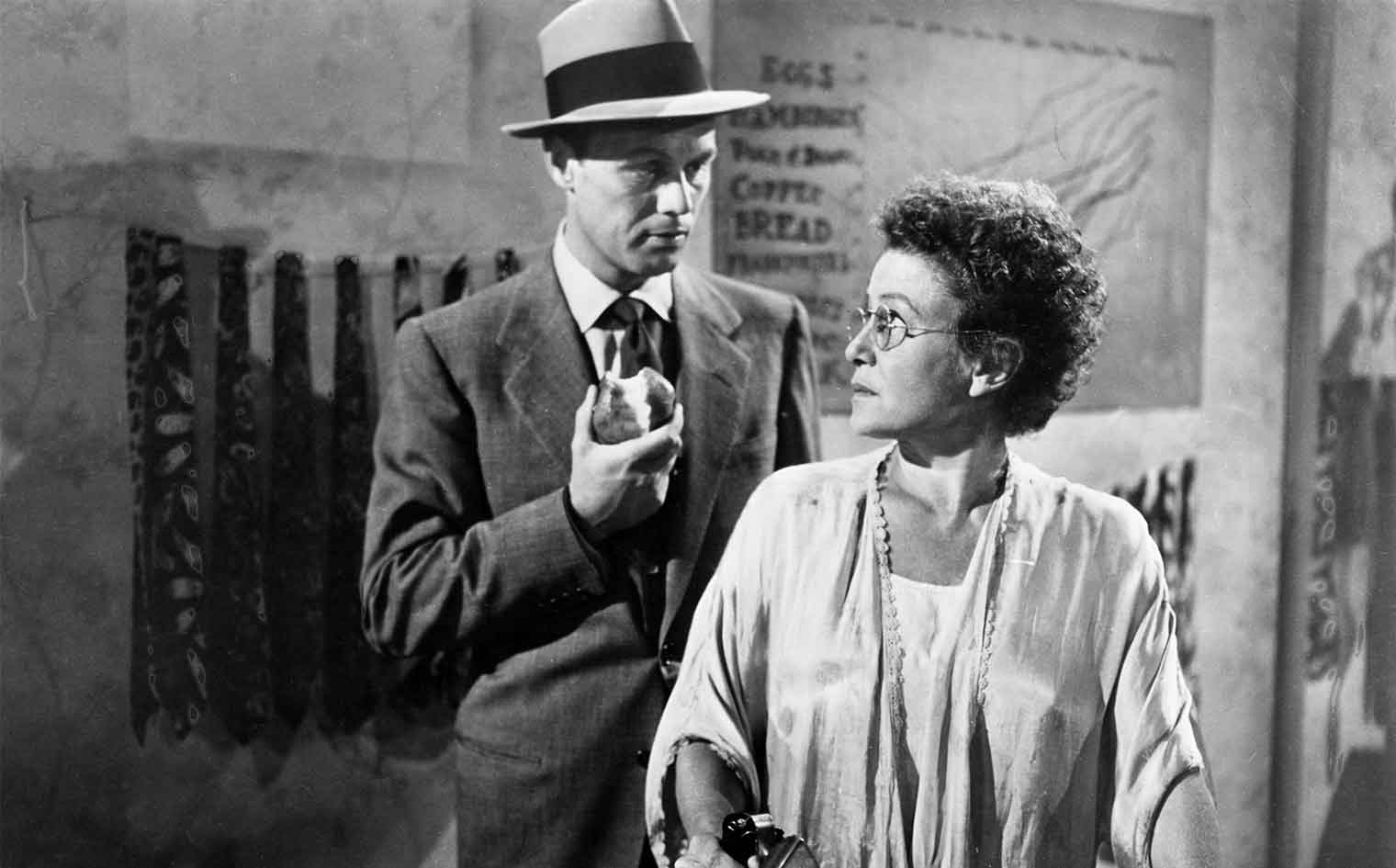 "TENSE AND WONDERFULLY MOODY. A restoration so sharp you can practically see the Communist paranoia.”
– Time Out New York

“SEE FULLER'S PICKUP ON SOUTH STREET, AND RELISH THE CITY’S CLOSING IN. The most claustrophobic American film before Psycho, and the finest distillation of Fuller’s tabloid sensibility.”
– Charles Taylor, Village Voice
Click here to read the full review

“SIMPLY ONE OF THE GREATEST FORGOTTEN MOVIES OF THE 50s… HAS THE LOOK AND FEEL OF A BRILLIANTLY CHOREOGRAPHED STREET FIGHT!”
– Ty Burr, Entertainment Weekly

“FULLER’S BEST FILM! Dependent on a trademark coziness to draw the spectator’s attention. Little nests or lairs instead of apartments, a hammock instead of a bed, a box lowered into the river in place of a refrigerator, violence that is never interrupted... Fuller’s concentration has the curiosity of a kitten: the fine thing about Peters is that her nervous defiance, her guileless and garrulous jabbering seem the pensive, unfortunate traits of a private person rather than an actress’s tricks.”
– Manny Farber

“As Fuller’s typically perverse, pigheaded hero, Widmark draws on the snickering, psychotic style that first made him a star.”
– Dave Kehr

“The lesson is clear that Fuller was at his best whenever he had a hero or protagonist nobody could think of taking home to mother. This is authentic pulp cinema.”
– David Thompson