(1965) “It’s gotta look real. This isn’t a movie.” Canned from his TV job, Jean-Paul Belmondo, fed up with wife and Paris (who wouldn’t be, after cocktail party conversation consisting solely of ad copy?), runs off with babysitter Anna Karina– had they known each other before? ­– but the next morning, what’s that dead body doing there? And then there’s a Bonnie and Clyde-ish crime spree/escape to the south of France– never more ravishing than in this restoration of Raoul Coutard’s sun-splashed color and Scope photography– done in the style of pop art, comic strips, and inspired improvisation (Belmondo’s hilarious imitation of crusty acting legend Michel Simon), with a slow-motion carjacking, dancers somersaulting on a beach while plotters clinch a double-cross and climaxed by unbilled Beligian-French standup great Raymond Devos’ tale of a haunting romantic melody that he just can’t get out of his head. A bitter story of love betrayed loosely based on the novel Obsession by Lionel White, author of The Killing (filmed by Kubrick) and spiced with a cameo by director Sam Fuller. DCP restoration. Approx. 110 min. 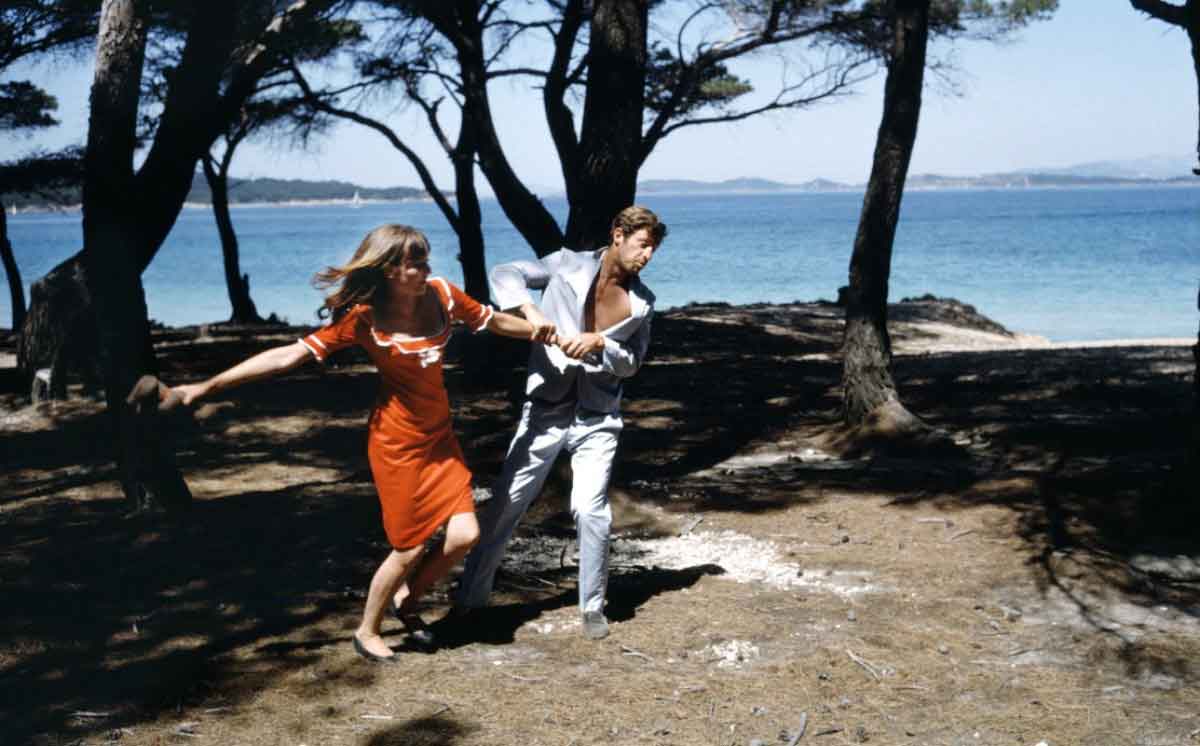 “A VITAL PART OF FILM HISTORY!”
– The Guardian

“AS INTOXICATING AS ANY CONTEMPORANEOUS HEAD MOVIE!”
- Slant

“Inventively drapes genre pastiche, literary references, flash inserts and cheeky agitprop over a robust Bonnie and Clyde-like framework to deliver a film which, in spirit, feels like both the sum total of his past work and an exhilarating sign of things to come. It hąs a wild-eyed, everything-in-the-pot cross-processing of artistic, cinematic, political and personal concerns, where the story stutters, splinters and infuriates its way to an explosive finale.”
– David Jenkins, Time Out (London)

“A symphony in the key of red… oddly meticulous in its deconstruction of classical filmmaking, the crime genre, ­ even musicals. One extraordinary shot, as Belmondo and Karina cross a field, followed by a thick plume of smoke from the burning wreckage of their car, would be almost unthinkable today without CGI. Prefiguring the entire career of J.G. Ballard, it’s a crazy landmark ­ a magnificent, witty and brutal adventure into cinema’s id.”
– Tim Robey, The Telegraph

“As in Breathless, Godard favors wryly detached longshots of frantic action sequences, making Belmondo and Karina look like kids playing cops 'n' robbers. And there is an amusing final joke, showing Belmondo's impotent second thoughts about suicide. Engaging and beguiling - perhaps in spite of itself.”
– Peter Bradshaw, The Guardian

“The most ravishing and romantic film ever made… The dazzling mise-en-scène alternates Lichtenstein with Cézanne, pop art with impressionism, the shadow of Amerika falling across the Provençal sun.”
– Amy Taubin, Village Voice

“One of the humblest and most gentle of Godard's films… in part a delicate, sentimental love story, a little on the order of Truffaut… There is no bravado in the part Belmondo plays this time, or any real violence in Miss Karina's. They are both charming and fed up, an Idiom that sounds richer in French and that is applied in the film to everyone, including the man in the moon. One moving thing is that a director as proud and forceful, as annihilatingly positivist as Godard should make a film this tentative and forbearing about an artist and his girl in love.”
– Renata Adler, The New York Times