(1954) During Japan’s Heian Period, the family of a disgraced aristocrat is attacked by pirates, with wife Kinuyo Tanaka (Ugetsu, Life of Oharu, etc.) sold into prostitution and her two children enslaved. But thanks to one grown-up sibling’s sacrifice, the other escapes, and then... Mizoguchi’s adaptation of a famous legend is one of his most atmospheric works and third Venice Silver Lion winner. 4K DCP restoration. Approx. 124 min.

Restored by Kadokawa Corporation and The Film Foundation at Cineric, Inc. in New York, sound by Audio Mechanics, with the cooperation of The Japan Foundation. Special thanks to Masahiro Miyajima and Martin Scorsese for their consultation.

“A masterpiece managed with exquisite patience, the film is slow-moving only in the sense that it doesn’t have to move for anybody; Mizoguchi’s hands and eyes search out every crevice along the eternal landscape, granting his characters clemency, or breaking their legs, based on the roll of an infinite-sided die… [Exerts an] immeasurable gravitational force… Every cut threatens to swallow a galaxy.”
– Jaime N. Christley, The Village Voice

“Mizoguchi’s most emotionally pummeling film… The restoration is impeccable.”
– Joshua Rothkopf, Time Out

“The false romanticism of the standard period drama is missing and there is not one sword fight. The hero wins by having righteousness on his side. Again, Mizoguchi insisted upon the ‘humanistic tradition,’ and no matter how dark the future of the children, there is always reason to hope. The photography in this film, the work of Kazuo Miyagawa (Rashomon) was particularly fine, providing a beauty which contrasted greatly with the ugliness of the subject matter.”
– Donald Richie

“The humanism in Mizoguchi and the Shakespearean sweep of time and society are akin to Renoir’s vision of life’s theater. Their language was the same: the way camera movements expanded consequence; spatial connections that spoke to likeness; and the suffering. Mizoguchi’s work of the fifties is the great tragic moment of cinema... This is a perfect lm, one in which we never notice execution or exactness.
– David Thomson

“I have seen Sansho only once, a decade ago, emerging from the cinema a broken man but calm in my conviction that I had never seen anything better; I have not dared watch it again, reluctant to ruin the spell.”
– Anthony Lane, The New Yorker 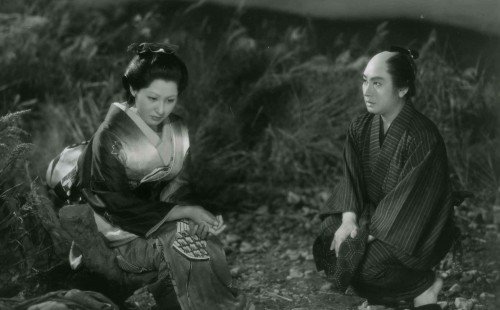 A STORY FROM CHIKAMATSU