*Introduced by Bruce Goldstein with slide presentation “Uncovering Uncovering ‘The Naked City,” showing how he and his crew identified many of the movie’s locations (documentary and slideshow will follow the feature).

Following a beautiful young model’s murder on W. 83rd St., inspector Barry Fitzgerald and detective Don Taylor track down leads to Stillman’s Gym, the old Essex Market (Essex Street, just north of Delancey), a corner candy store at Norfolk and Rivington, and ultimately to the City Morgue and Roosevelt Hospital — among the picture’s 107 different locations — with final showdown on the Williamsburg Bridge. Based on an actual 1920s case, once covered by producer, narrator and erstwhile newspaperman Mark Hellinger. Oscar-winning camerawork by former Garbo lenser William Daniels.

“The hero is New York itself, forever encapsulated during the hot summer of 1947. Its citizens are the unknowing supporting cast... both a landmark and some sort of masterpiece.”
– Philip French, The Guardian

“As much as anyone else in 1940s Hollywood, Dassin helped define the expressionistic style that film buffs and scholars revere as Film Noir, from taking cameras into the streets for the gritty The Naked City, to battling producers to cast actors against type and employ the crew of individualistic artists he wanted, Dassin was a rugged iconoclast even before he earned an international reputation as the blacklisted expatriate who made the French Noir masterpiece Rififi.”
– Loren King, Chicago Tribune

(2020, Bruce Goldstein) In this original short documentary and personal essay, Bruce Goldstein, founder of Rialto Pictures and repertory director at New York’s FIlm Forum, tracks down many of the 100+ New York City locations—from the Bronx to the Lower East Side—used in his friend Jules Dassin’s classic police procedural THE NAKED CITY, while also spotlighting the contributions of producer Mark Hellinger and cinematographer William Daniels. Approx. 23 min.

“Uncovering ‘The Naked City,’: MORE THAN THE BEST ‘WHERE-THEY-FILMED IT’ DOC EVER MADE…. As Goldstein wittily traces director Jules Dassin’s Gotham roots and influences, this twenty-three-minute documentary becomes an irresistible mash note to the teeming vitality of 1947 New York.”
– Michael Sragow

“Minute for minute, Bruce Goldstein’s short account of the making of The Naked City was the most purely enjoyable movie of 2020.”
– J. Hoberman, The Tablet 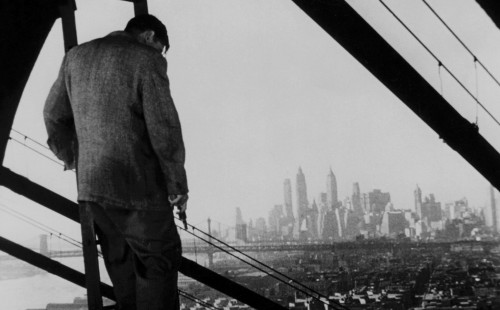