WHO WE ARE: A CHRONICLE OF RACISM IN AMERICA
5:30

WHO WE ARE: A CHRONICLE OF RACISM IN AMERICA
5:30*

WHO WE ARE: A CHRONICLE OF RACISM IN AMERICA
5:30*

GARBO DAYFLESH AND THE DEVIL
1:10 ♪

WHO WE ARE: A CHRONICLE OF RACISM IN AMERICA
5:30

NYC’S MOVIE RENAISSANCECITY ACROSS THE RIVER
8:50

FLESH AND THE DEVIL introduced by author/publisher Robert Gottlieb

THE WITCHES OF THE ORIENT

How does a Japanese women’s volleyball team from the late 1950s become an international sensation, feminist role models, the subject of a wildly popular comic book and a still-influential anime? This stranger-than-fiction story is dynamically told by Julien Faraut (JOHN McENROE: IN THE REALM OF PERFECTION), with an ironic twist on the original demeaning moniker, Oriental Witches. A group of Osaka textile workers are transformed into a fiercely competitive volleyball team by their astonishingly ruthless coach whose unconventional techniques emphasize speed and aggression. A record-setting winning streak and a dramatic 1964 Tokyo Olympics triumph follow. Wonderful archival footage of the women in training and on the court, animated versions of their championship games, and moving interviews with the women today are set to a pulsating electronic score.

“Critic’s Pick. The movie uses chic archival footage to set up a mythic reconsideration of their triumphs… Montages are set to a hip electronic score, complete with Portishead needle drops… This documentary elegantly restores the glow of legend.”
– Teo Bugbee, The New York Times

“Wonderful archival materials. The world-beating Japanese volleyball team of the 1960s roars colorfully back to life...a solid crowdpleaser… [Faraut’s] approach to his material always feels fresh...perfectly palatable for those without even a passing interest in the sport - or, indeed, in sport at all.”
– Neil Young, Screen Daily 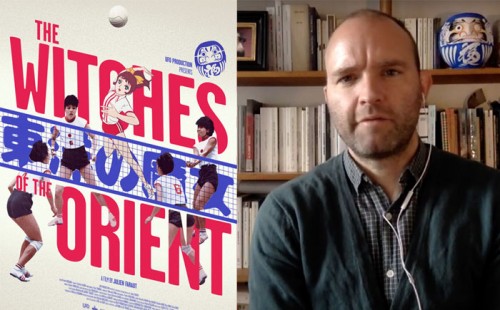 Q&A with THE WITCHES OF THE ORIENT Filmmaker Julien Faraut