THERE IS NO EVIL

Iranian filmmaker Mohammad Rasoulof has been sentenced to prison and banned from making films for two years. THERE IS NO EVIL is an omnibus feature of four dramas that grapple with the ethical implications of the death penalty, especially as it is exercised in an authoritarian regime. In 2017, Amnesty International indicated that Iran accounted for more than half of the world’s executions. The film was shot in secret, smuggled out of Iran, and sold to 25 countries. Eric Kohn in IndieWire calls it "a brilliant anthology" and "a riveting thriller" that "maintains an enthralling rhythm, with an organic visual approach that keeps changing throughout." He continues: "There's an intimacy to Rasoulof's storytelling that often hinges on beguiling poetic moments… The movie provokes the wonder and terror of what it means to live in a world where every resolution brings new questions."

“Grade: A-. A collection of four thematically connected stories about Iran’s death penalty and the demoralizing impact of state-sanctioned killing, this elegantly written and humanely acted movie extends empathy in multiple directions, including towards those struggling with the burden of ‘just following orders.’ The film’s as compassionate as it is unsettling, and as provocative as it is poignant… Through the evocative performances of its ensemble cast and an impassioned argument that certain punishments are more destructive than certain crimes, THERE IS NO EVIL presents a stirringly defiant case for the importance of all life.”
– Roxana Hadidi, A/V Club

“One of the most kinetic films ever made surreptitiously; the long takes, particularly one in which Pouya retrieves a condemned man, then crumples, are breathtaking. And to make a movie that ponders the moral rot of an unjust system while under the gun of that unjust system is courageous and artistically potent.”
– Ben Kenigsberg, The New York Times

“The four segments of the Iranian director Mohammad Rasoulof’s passionate, mournful drama—which he filmed clandestinely—detail the horrors of capital punishment as practiced in his country… Rasoulof’s aesthetic is plain and practical; his sense of drama has the revelatory power of documentary.”
– Richard Brody, The New Yorker

“A major work of recent Iranian cinema. Not since A SHORT FILM ABOUT KILLING has a filmmaker produced such a thrilling case against capital punishment, an enraging, enthralling, enduring testament to the oppressed.”
– Ed Frankl, The Film Stage

“A brave and impassioned work. THERE IS NO EVIL’s powerful opening chapter (is) a tour de force.”
– Lee Marshall, Screen Daily

“A series of Kafkaesque moral parables about Iran’s death penalty and its perpetrators. A feat of artistic dissidence.”
– Peter Debruge, Variety

“The first untitled episode about a man who works at night is a perfectly balanced and crafted little jewel.”
– Deborah Young, The Hollywood Reporter (writing on the film’s first episode) 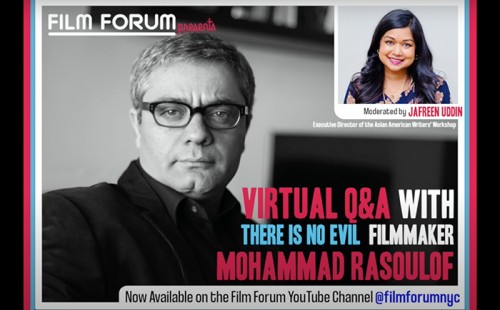 Watch a Q&A with THERE IS NO EVIL filmmaker Mohammad Rasoulof, moderated by Jafreen Uddin, Executive Director of the Asian American Writers' Workshop. In Farsi and English - Translation by Massoumeh Lahidji. Recorded on Friday, May 14, 2021.