(1992) “We’ve all got it coming.” Wyoming, 1880. Eastwood’s widowed William Munny, hog farmer and reformed killer — even of women and children — just can’t seem to keep his kids fed. But then an aspiring gunman brings a job offer from a cathouse madam in distant Big Whiskey: $1000 to waste two drunken cowboys let off easy by Sheriff Gene Hackman (Supporting Actor Oscar) after they disfigured one of her girls. Time to bring in old killing pal Morgan Freeman, even as Richard Harris’ “English Bob” goes for that reward on his own. But there are rude awakenings in store. Eastwood held on to David Webb Peoples’ script until he was old enough for the part, then made perhaps the American cinema’s darkest, most deglamorized look back at the myth of the Old West, and at the cost of violence, as well as his starkest, most tormented personal portrait. Final credit: “Dedicated to Sergio and Don” (Leone and Siegel). 4K DCP restoration. Approx. 127 min. 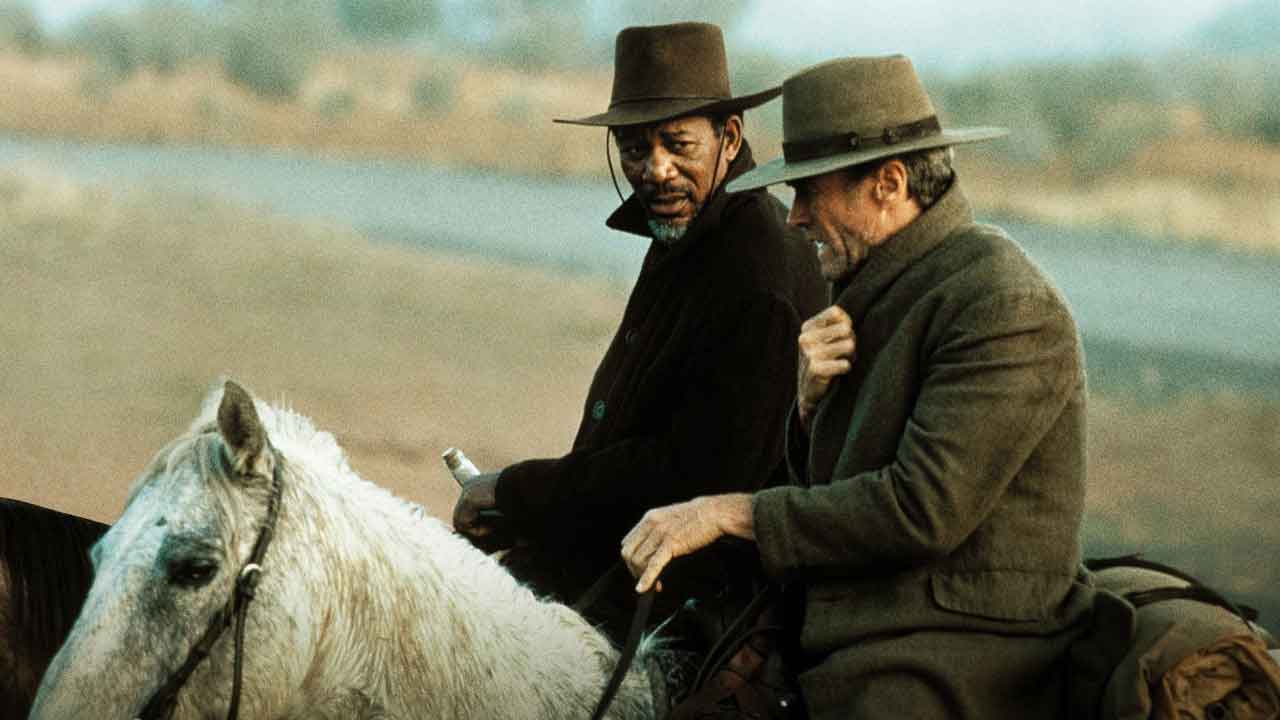 “Sums up Eastwood’s iconic career in Westerns… The film sets up a classic showdown, deepened with regret and savagery.”
– The Telegraph

“Remains rich and haunting, especially as rendered by cinematographer Jack N. Green with a bare and melancholic sense of wide-open space that spins self-pity into a visual song of transcendentalism.”
– Chuck Bowen, Slant Magazine

“The weightiest of Clint Eastwood westerns, the one that definitively dresses down the star’s legacy of screen violence. Unforgiven is a stark western in slow motion, obsessed with reflection, not action.”
– Danny King, The Village Voice

“A MASTERPIECE. Sets up a classic showdown, deepening it with notes of phony bluster, regret and a savagery that’s far from heroic.”
– Joshua Rothkopf, Time Out

“FRESH, PROFOUND, COMPLEX. A magnificent movie that transcends its familiar tale of a reformed gunman forced by circumstance to resume his violent ways. Refuting conventional cowboy heroics, Eastwood presents an alternative myth whereby a man, goaded by Furies to yield to a past that still haunts him, dispatches himself to a living Hell. In this dark, timeless terrain, the film achieves a magnificent intensity.”
– Geoff Andrew, Time Out (London)

“The most provocative Western of Eastwood’s career, and also the most potently acted. Eastwood gives it a tragic stature that puts his own filmmaking past in critical and moral perspective.”
– Peter Travers, Rolling Stone

“Pays homage to the great tradition of movie Westerns while surreptitiously expressing a certain amount of skepticism... Full of broad chilly landscapes and skies that are sometimes as heavy with portents as those in something by El Greco... The center of attention, from the moment he rises up out of a hog pen until the darkest fade-out in Western movie history, is Mr. Eastwood. [One of] his richest, most satisfying performance[s]. There’s no one like him.”
– Vincent Canby, The New York Times

“An adult Western that can stand with the great accomplishments of the genre’s golden age...This dark, melancholic film is a reminder — never more necessary than now — of what the American cinema is capable of, in the way of expressing a mature, morally complex and challenging view of the world.”
– Dave Kehr