“Chris McKim’s riveting documentary succeeds in capturing the gritty, glorious chaos of the artist’s life and work… a symphony of noise and image, a cacophonous rebuttal to white cube sterility,” writes Eileen G’Sell in Hyperallergic. David Wojnarowicz (1954–1992) was fierce and fearless, a prescient and protean creative force and sexual rebel who lived outside the mainstream throughout his entire short life – dying of AIDS at age 37. He survived an abusive childhood to become a street hustler, musician (co-founder of the No Wave group, 3 Teens Kill 4), filmmaker, memoirist, painter, collagist, and much else. As one of the most searing voices in ACT-UP (the radical queer rights group) during the Reagan 80s, he fought for action to counter the AIDS epidemic. Former RuPaul’s Drag Race showrunner Chris McKim bases his film on the artist’s rich archive of recordings, interviews, and diaries. Wojnarowicz’s relationship with photographer Peter Hujar, his friendships with Fran Lebowitz, Gracie Mansion, Carlo McCormick, and Kiki Smith contextualize his life and art. Some of his most iconic images: stencils of a burning house, soldiers and planes; photographs of his own mouth sewed shut, of falling buffalo, and of this face buried in dirt. Wojnarowicz battled victoriously with Congressional conservatives who opposed his NEA grant (“an orgy of depravity”) and received recognition for ground-breaking shows at the 1985 Whitney Biennial and at Artists Space.

Presented with support from the R.G. Rifkind Foundation Endowment for Queer Cinema; the Richard Brick, Geri Ashur and Sara Bershtel Fund for Social Justice Documentaries; the Helen Frankenthaler Endowed Fund for Films on Art, and the Roy Lichtenstein Foundation Fund.

“Deeply moving… Prominently features self-depictions taken from his copious audio and visual archives to evoke his life and work with a bracing, tragic sense of immediacy… Chris McKim incisively intertwines a generous batch of audio interviews with Wojnarowicz’s friends, family, and associates; a rich set of archival footage to conjure his time and place; and vigorous effects to evoke his inner world.”
– Richard Brody, The New Yorker

“A stirring requiem of rage and resistance…Chris McKim's defiantly alive collage documentary is so charged with the words and images of the multimedia artist it could almost be considered self-portraiture...a radical voice that remains urgent and relevant.”
– David Rooney, The Hollywood Reporter

“Works ground up through Wojnarowicz's art to present an experiential plunge into the raw tumult of the New York art scene.”
– Chris Barsanti, The Playlist 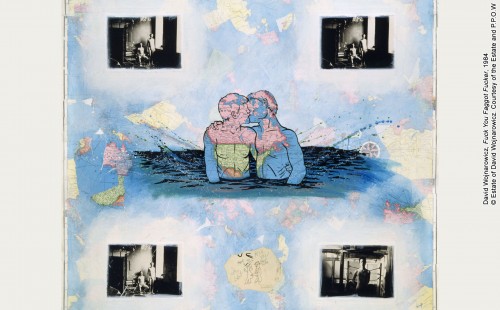