Mir Kumen On will be introduced by film critic/Jewish film historian J. Hoberman on Sunday, June 23 at 3:10.

J. Hoberman is the author of a dozen books including Bridge of Light: Yiddish Film Between Two Worlds, The Dream Life: Movies, Media and the Mythology of the Sixties, and, most recently, Make My Day: Movie Culture in the Age of Reagan. He writes for Artforum, the New York Review of Books, and the New York Times. From 1978 through 2011, he reviewed movies for The Village Voice.

“Although Mir Kumen On was kept from Polish movie houses, there were evidently a number of clandestine or private screenings. The film also circulated abroad with theatrical showings in both Paris and Brussels. In the spring of 1938, Medem Sanatorium’s cofounder and director Shlomo Galinsky brought Mir Kumen On to the United States, where, with the English title The Children Must Laugh, it had its New York premiere under the auspices of the International Ladies’ Garment Workers’ Union and Socialist councilman Barney Vladek. It ran for a week at the midtown Continental Theater (where the Polish-Yiddish feature Der Dibek (The Dybbuk) had just completed a two-month engagement), on a bill with the WPA short, Work Pays America.”
– J. Hoberman, Bridge of Light: Yiddish Film Between Two Worlds

“Mir Kumen On is not only the art of the film industry, it is much more: it is the art of life, of sincerity, human relationships. The images shatter us, evoke the deepest sorrow… Such a film speaks directly to the heart, to the emotions. It says more than a hundred speeches, articles, and books. It is an agitka, but artistic, a higher order which opens our eyes and pierces our senses… pulsating, clamorous, genuine: This is how one lives in the cellars for years and this is how one catches his breath at the Medem Sanatorium.”
– Michal Kitai, Literarishe Bleter (1936)

“Precious and haunting.”
– Times of Israel 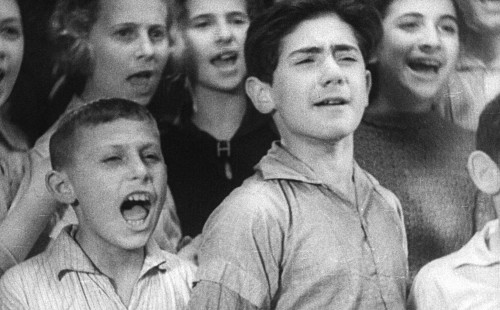