This screening is sold out online. Some tickets may be available on day of show. A standby line will form an hour before the screening.

Actress and director Natalie Portman has starred in over 40 films, including her debut, THE PROFESSIONAL (1994), HEAT (1995), BEAUTIFUL GIRLS (1996), GARDEN STATE (2004), as well as Episodes I-III of the STAR WARS series. She won the Academy Award for Best Actress for her performance in Darren Aronofsky’s BLACK SWAN (2010), and was nominated for Academy Awards for her performances in CLOSER (2004) and Pablo Larrain’s JACKIE (2016). She wrote, directed and starred in A TALE OF LOVE AND DARKNESS (2015), based on the memoir by Amos Oz, set in the early years of the State of Israel. Her performance in VOX LUX was widely praised at the Venice and Toronto film festivals this fall, with critics calling it a “riveting performance of fiercely mannered bravado” (Guy Lodge, Variety) and “beguiling” (Richard Lawson, Vanity Fair).

“(Portman has) never played a character like the one she does in VOX LUX, a movie that comes on like the evil twin of A STAR IS BORN. This brash, wildly inventive, and occasionally assaultive movie is the most ambitious film I’ve seen so far in Toronto… (The film) bristles with ideas and cinematic invention, be it the interplay between Sia’s catchy songs and brilliantly discordant score by Scott Walker; funny riffs on modern America and the creation of ABBA; the audacious casting of Cassidy as both Celeste and Celeste’s daughter, Albertine; or Celeste’s final, extravagant concert, whose heavily costumed, robotic dance moves are choreographed by Portman’s real-life husband, Benjamin Millepied.”
– John Powers, Vogue 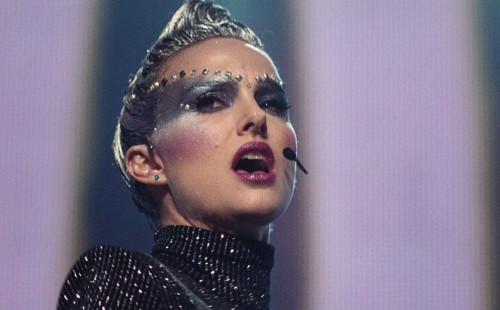