WRITTEN AND DIRECTED BY PRESTON STURGES
UNFAITHFULLY YOURS
2:30 6:45

WRITTEN AND DIRECTED BY PRESTON STURGES
THE MIRACLE OF MORGAN’S CREEK
2:30

WRITTEN AND DIRECTED BY PRESTON STURGES
THE PALM BEACH STORY
6:40

WRITTEN AND DIRECTED BY PRESTON STURGES
THE LADY EVE
8:40

WRITTEN AND DIRECTED BY PRESTON STURGES
CHRISTMAS IN JULY
1:00

WRITTEN AND DIRECTED BY PRESTON STURGES
THE LADY EVE
2:40 8:45

WRITTEN AND DIRECTED BY PRESTON STURGES
THE PALM BEACH STORY
6:45 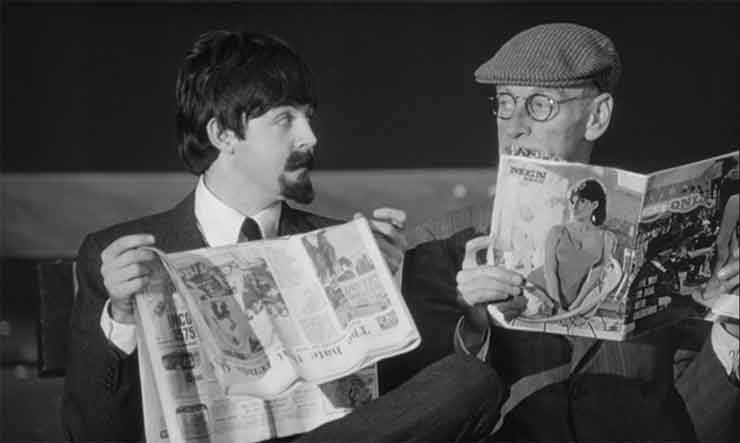 (1964) Q: Are you a mod or a rocker? Ringo: I’m a mocker. Just another day in the life: fleeing from screaming fans at a train stations, contending with a “very clean” grandfather, jamming in a baggage car, cavorting in a field, wandering by a river, weirding out knotted-browed reporters with absurdist comebacks, wowing crowds at an orgasmic final concert — the Beatles’ film debut rocketed them to another level beyond the latest pop faces as even squarely middle-aged critics, their knives sharpened for yet another schlocky teen idol exploiter, were disarmed into grudging hosannas. Q. Tell me, how do you find America? John: Turn left at Greenland. Director Richard Lester melded his mastery of commercials with New Wave techniques in a semi-documentary style that created something new — and since endlessly imitated — along with Alun Owen’s screenplay in which scripted oneliners and the occasional ad-lib blend seamlessly, thanks, of course, to the exuberant, anarchic personalities of the Fab Four themselves. Q: What would you call that hairstyle? George: Arthur. And those songs just keep on coming: “I Should Have Known Better,” “Can’t Buy Me Love,” “All My Loving,” “I’m Happy Just to Dance With You,” “She Loves You,” and the title song, inspired by a chance remark by Ringo and written overnight by Lennon and McCartney after filming was completed. Approx. 85 min. DCP. 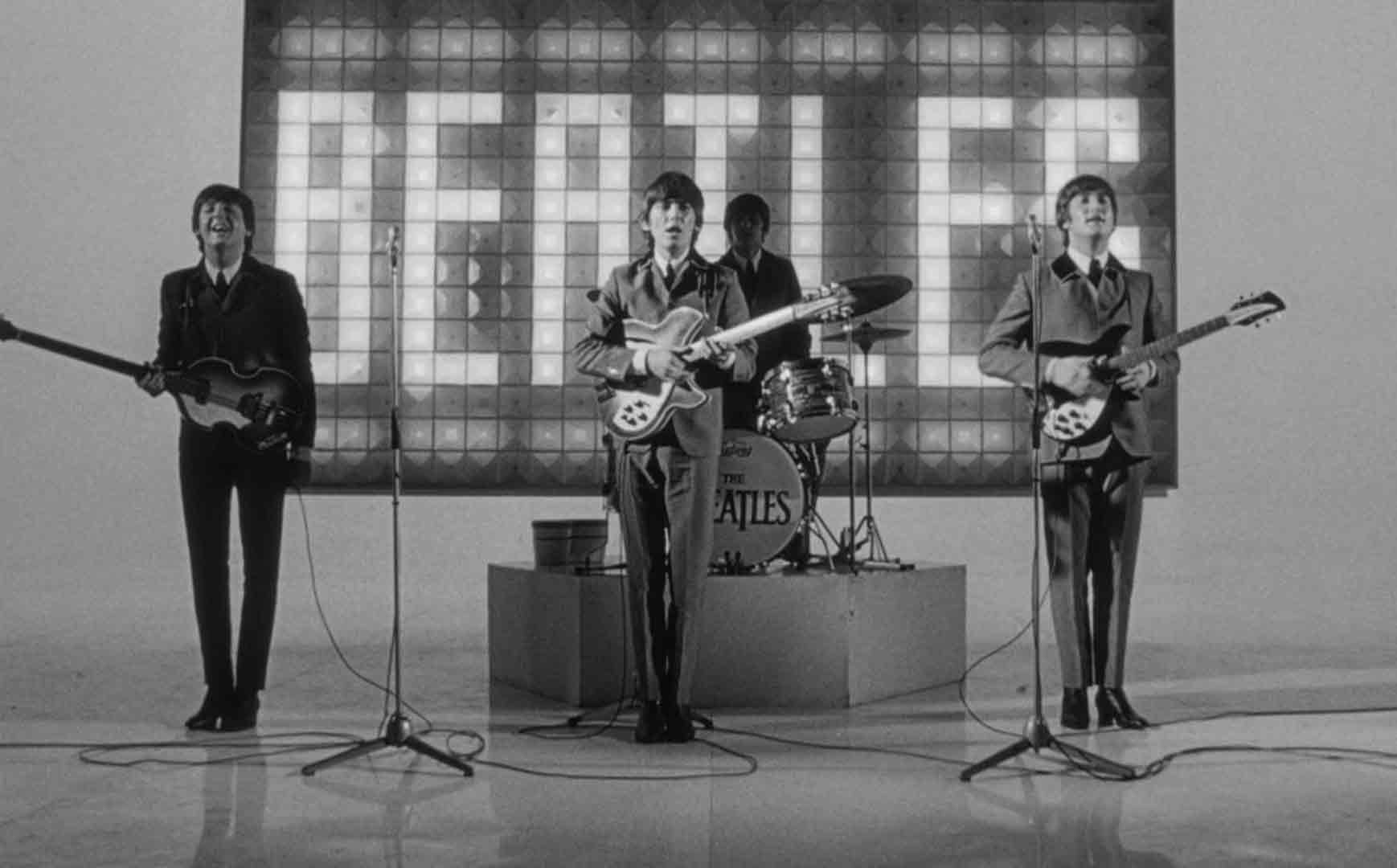 "Looks more aggressively modern than any recent pop movie you can name. This is where it all started: the first (and, some would argue, the last) truly successful fusion of pop music and cinema."
– Tom Huddleston, Time Out New York
Read the full review

"ONE OF THE WORLD'S PERFECT FILMS! For a 50-year-old movie, it still looks impossibly youthful, especially in this restored version: In all its satiny black-and-white splendor, it feels more like today than yesterday… There was a brief time when everyone loved the Beatles, finding them agreeable and charming and cheekily nonthreatening. But there’s real danger, all right, in their music, and the numbers in A Hard Day’s Night are the most gently seductive ever put on film. The boys captivate the young schoolgirl played by Patti Boyd—later to become Mrs. George Harrison—with a magically impromptu performance of “I Should Have Known Better” in a train carriage, the song’s myriad boy-meets-girl questions wedged between the hands of a card game. But it’s in the final cluster of songs, an artful melding of “Tell Me Why,” “If I Fell,” and “I Should Have Known Better,” where Lester truly tips his hand. He knows what this movie is about, and he knows who it’s for."
– Stephanie Zacharek, Village Voice
Click here to listen to the Voice Film Club podcast on A Hard Day’s Night
featuring Voice film critics Alan Scherstuhl, Amy Nicholson and Stephanie Zacharek

“Still brims with a sense of urgency and lightning-in-a-bottle vitality; take out the period-specific details and early Sixties Pop Art references, and it could have been made this year.”
– David Fear, Rolling Stone
Click here to read the full feature

"THE ZENITH OF ROCKSPLOITATION AND... A FOREFATHER OF THE MUSIC VIDEO!”
– Sam Kashner, Vanity Fair
Click here to read Vanity Fair’s feature on Richard Lester and A Hard Day’s Night

"Joy and freedom: those feelings were what the Beatles brought to an astonished world when they appeared as if by divine fiat in the early ‘60s, and they’re the same feelings that A Hard Day’s Night perfectly preserves for those too young to have experienced Beatlemania first-hand. Fifty years later, I watch the film and feel about it almost exactly as my 12-year-old self did. That would be astonishing, perhaps, if I’d not learned long ago to expect such serendipitous miracles from the Beatles."
– Godfrey Cheshire, RogerEbert.com
Read the full review

"A SATIRIC CELEBRATION OF ANARCHIC YOUTH AND THE BLAST OF OXYGEN THAT THEY GIVE TO A WHEEZING KINGDOM. Richard Lester, and the screenwriter, Alun Owen, set out to show how the Beatles' phenomenal fame encased them in a cocoon. But the Fab Four weren't larvae–they were brilliant butterflies, and they displayed an unsurpassed rapport with their fans and the movie audience, too."
– Michael Sragow, The New Yorker

"Rock movies were never the same after A Hard Day's Night. The 1964 screen debut of The Beatles was meant to cash in on the wave of Beatlemania sweeping the band's native England and produce a soundtrack album that American movie studio United Artists could market through its music division. It did that and more: Like its stars, the movie became a cultural phenomenon."
– Steve Dollar, Wall St. Journal
Read the full review

"A POP CULTURE PHENOMENON! Watching the opening is like getting a direct injection of happiness... Lester and his team pick up and distill everything in the air on the eve of the counterculture: now capturing events with documentary realism, now stylizing them with gleeful surrealism, always managing, by impishly flouting the rules of ‘proper’ storytelling, to keep alive a sense of barriers being blasted. By embodying what its makers set out to document, Lester achieved something dazzling and rarely equaled... a reference point not merely for the birth of the Beatles as a mass phenomenon, but for the emergence of a wildly attractive youth culture that has transformed the world.”
– David Edelstein, Slate

“More than simply the deployment of kicky, “now” technique, this was a matter of attitude. Like the principal characters in Breathless or Shoot the Piano Player, perhaps even more so, the Beatles are characters who are blatantly living in a movie. A Hard Day’s Night is all about image — cameras and TV monitors are near ubiquitous.”
– J. Hoberman

“Lester did not invent the techniques used in A Hard Day's Night, but he brought them together into a grammar so persuasive that he influenced many other films. Today when we watch TV and see quick cutting, hand-held cameras, interviews conducted on the run with moving targets, quickly intercut snatches of dialogue, music under documentary action and all the other trademarks of the modern style, we are looking at the children of A Hard Day's Night… The concert footage as the Beatles sing "She Loves You” is one of the most sustained orgasmic sequences in the movies… Lester shows them clearly having a lot of fun… and then intercuts quick shots of the audience, mostly girls, who scream without pause for the entire length of the song, cry, jump up and down, call out the names of their favorites, and create a frenzy so passionate that it still, after all these years, has the power to excite.”
– Roger Ebert