Part of the series
STRATFORD ON HOUSTON
PREVIOUSLY PLAYED

(1965) “Oh Sir John, the times that we have seen!” laments Alan Webb’s doddering Justice Shallow in Welles’ dream of four decades (his cobbling together of four of the history plays, Five Kings, sank his celebrated Mercury Theater in 1938), his final – and arguably greatest – Shakespearean adaptation: a wintry lament for the “death of Merrie England” with Welles’ “plump Jack Falstaff” – a part that, over the years, he grew into – as the force of love and life versus the icily ruthless Prince Hal of Keith Baxter, with John Gielgud’s King Henry IV the moral center. Shot almost completely throughout with an extremely wide angle lens for a depth of focus seemingly approaching 3D, Chimes boasts some of Welles’ most grandiose imagery: Gielgud perched on his throne in some of the emptiest and draftiest castles ever filmed; Margaret Rutherford, Jeanne Moreau and Welles’ daughter Beatrice highlighted among teeming tavern scenes; Welles kneeling among a forest of spears, and hoisted, fully armored, atop a terrified horse; climaxing with one of the greatest battle scenes ever put on film. Rights issues over several decades have made it impossible to see one of Welles’ greatest masterpieces – the director’s personal favorite. DCP restoration. Approx. 115 min. 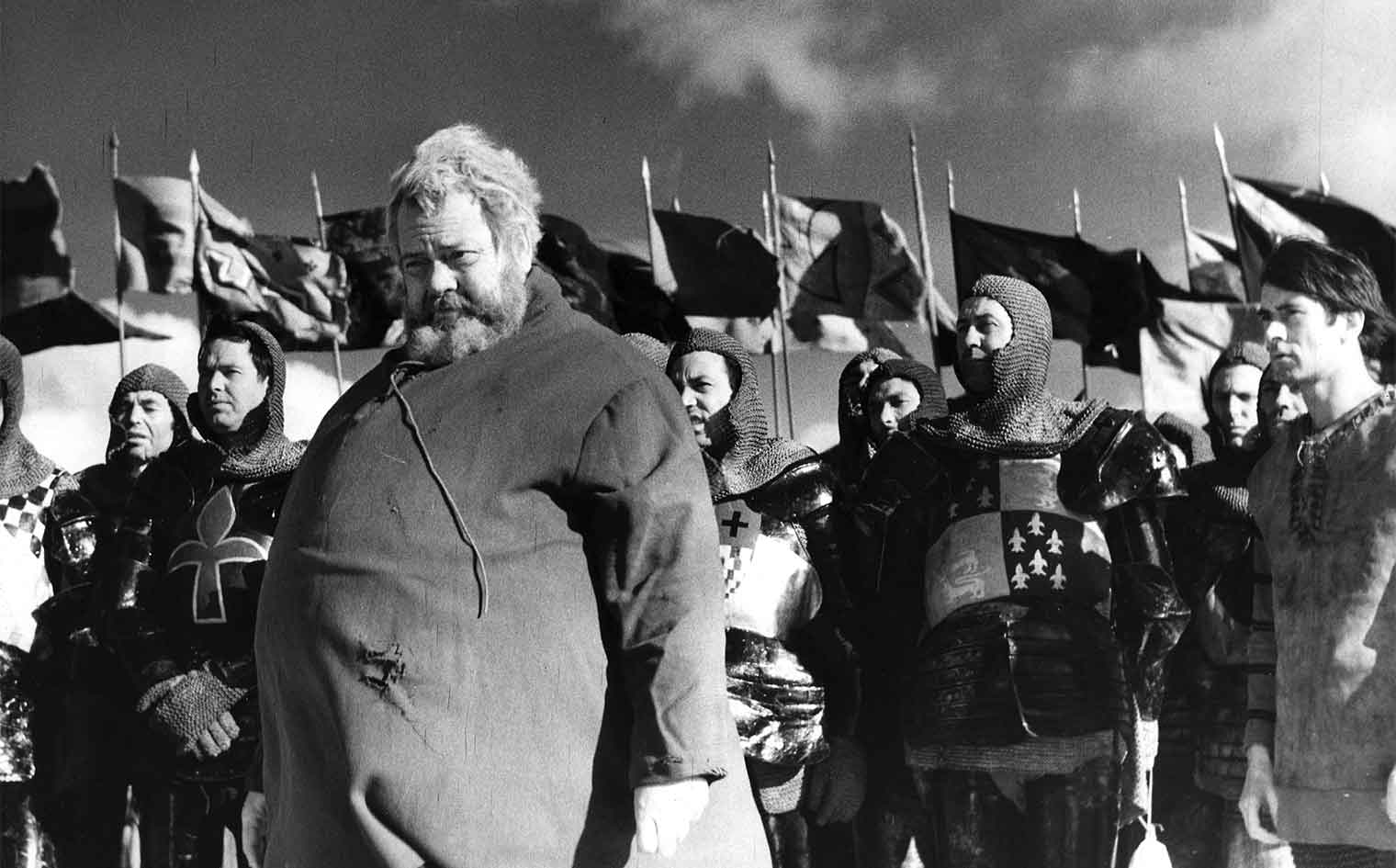 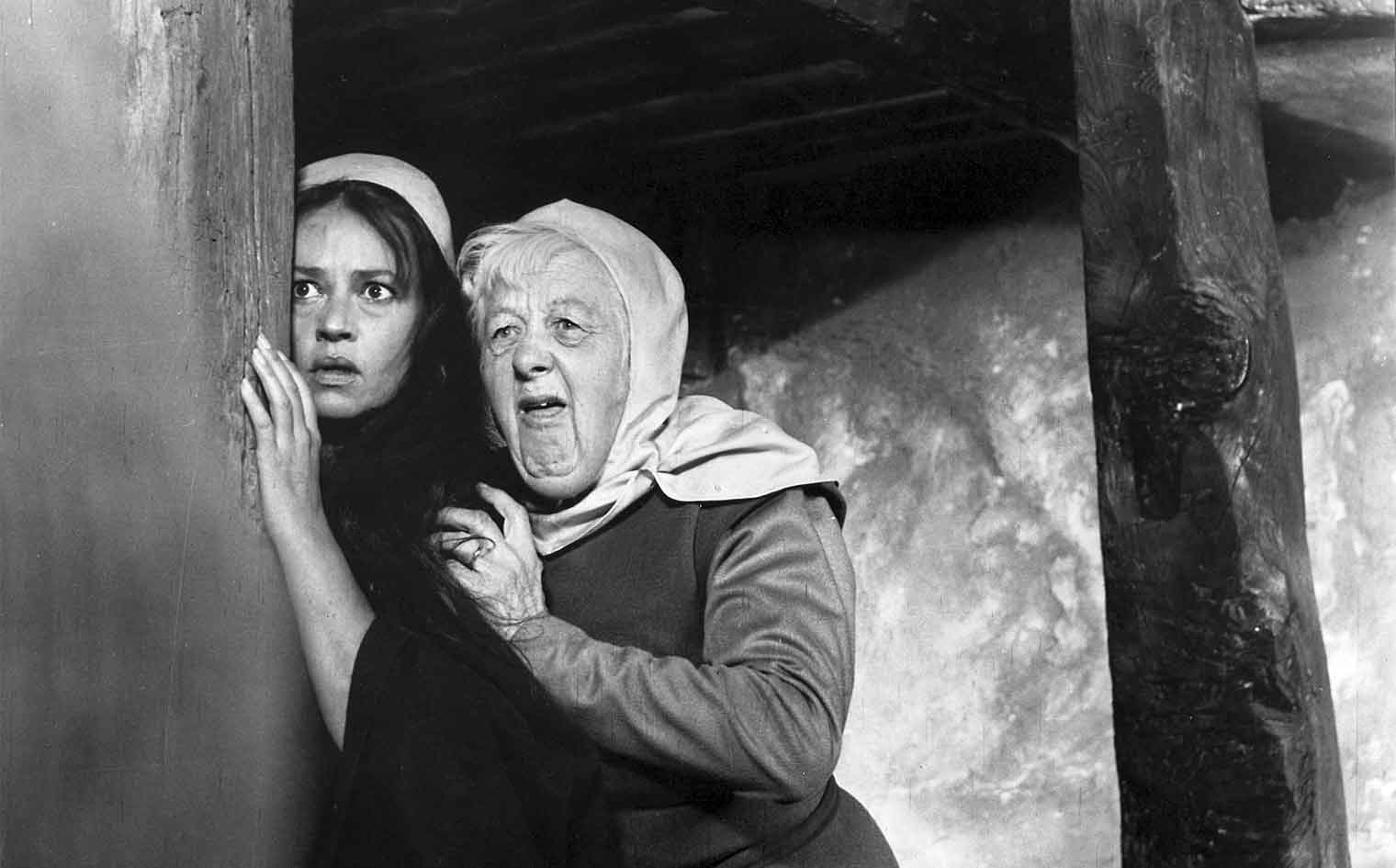 “A CINEMATIC EVENT OF THE FIRST ORDER!”
– Richard Brody, The New Yorker

“BURSTING WITH LYRICISM AND EMOTION! Welles choreographs both his actors and his camera with a flow and an esprit that few contemporary directors can match . The Eastcheap tavern comes off as dizzyingly serpentine—a labyrinthine adult’s-only playhouse—as Hal tumbles in and out of its corridors and crannies to surprise and torment Falstaff. The lighting throughout is resonant and evocative: the sun enters the vaulted palace of the God-conscious King in eerie clerestory beams. The editing is bold and fluid."
– Michael Sragow, Film Comment

“Decked out with scruffy hair, a cantilevered beard, crusty eyes and a crafty smile, and deploying a tuba-register voice that shakes the timbers of the Boar’s Head Inn, WELLES GIVES A PERFORMANCE THAT’S MONUMENTAL IN GIRTH AND IMMENSE IN DRAMATIC PRESENCE!
– Joe Morgenstern, The Wall Street Journal

[highest rating]
“Welles takes hold of a half-dozen plays and tosses them together into the air like confetti, picking and choosing what he wants, spinning what he chooses into a gorgeous tapestry, honoring the legacies of Shakespeare and Welles equally and simultaneously.”
– Slant

“A FILM TO TREASURE!”
– Roger Ebert

“Not an ad hoc project but the result of a lifetime of scholarship and creative experiment.”
– Pauline Kael

“Restrained and even serene (down to its memorably muddy battle scene), it shows Welles working largely without his technical flourishes—and for those who have never seen beyond his surface flash, it is ample proof of how sensitive and subtle an artist he was.”
– David Kehr

“WELLES’ MOST HUMAN FILM, HIS MOST POIGNANT, FUNNY AND EMPATHETIC! Anyone who buys the lazy lie that Welles’s talent nosedived along with his career in the wake of The Magnificent Ambersons needs to watch this… One of the best screen adaptations of Shakespeare, which is ironic, because it’s also one of the most irreverent.  It’s hard to imagine a more perfect and timely meeting of artist and character: at the time Welles was an outcast from Hollywood, better known as a raconteur and ham-for-hire than a creative force…. Strange and entrancing, at times dreamlike and distant, at others brutally realistic… Gorgeously, heartbreakingly sad, shot through with romantic surrender and the ache of loss.”
– Tom Huddleston, Time Out (London)

CHIMES AT MIDNIGHT: Q & A with Foster Hirsch and Keith Baxter

CHIMES AT MIDNIGHT: Q & A with Beatrice Welles