DIARY OF A CHAMBERMAID

(1964) “The country is always a little triste,” complains Parisian femme de chambre Jeanne Moreau en route to her new post at a provincial manor. But maybe another adjective comes to mind when she checks out the ménage: the foot fetishist paterfamilias (“I want to see them live!” he exhorts, as she saunters about in a choice pair of boots from his private stock); Michel Piccoli’s chain-smoking, endlessly frustrated son-in-law (“he’s a dead loss,” notes another domestic); the frigid, fuss-budget daughter who conducts enigmatic chemical experiments, and demands that Moreau remove her shoes before she dusts the salon; the next-door neighbor who tosses garbage and vituperation over the wall; and Georges Geret’s fascist roughneck manservant, who really enjoys slaughtering the geese. Adapted from Octave Mirbeau’s satiric 1900 novel (previously filmed in Hollywood by Renoir, with Paulette Goddard), we’re obviously in Buñuel country, although it’s one of his more stylistically straightforward works, with the action updated to the late 20s to provide commentary on the rise of the right-wing Action Française and the director’s trademark surrealism eschewed in favor of more realistic b&w cinematography, the Scope camera gliding past sets stuffed with “priceless” tchotchkes. A second-choice project for Buñuel after the Spanish government nixed his first attempt at Tristana, the material obviously proved congenial (the foot fetishism comes straight from the book) and teamed the director for the first time with producer Serge Silberman and co-scripter Jean-Claude Carrière (here in a cameo as the priest a little too interested in the daughter’s sexual problems), collaborators he would stay with for the rest of his career; while providing him with a very Buñuelian ambiguity – is Moreau coming on to a rapist/murderer because 1) she’s trying to trap him, 2) she’s actually turned on, or 3) both? – and a chance for belated revenge: the “Chiappe” the fascists cheer at the end is the police commisioner who suppressed his L’Age d’Or in 1930. New DCP restoration. Approx. 101 min. 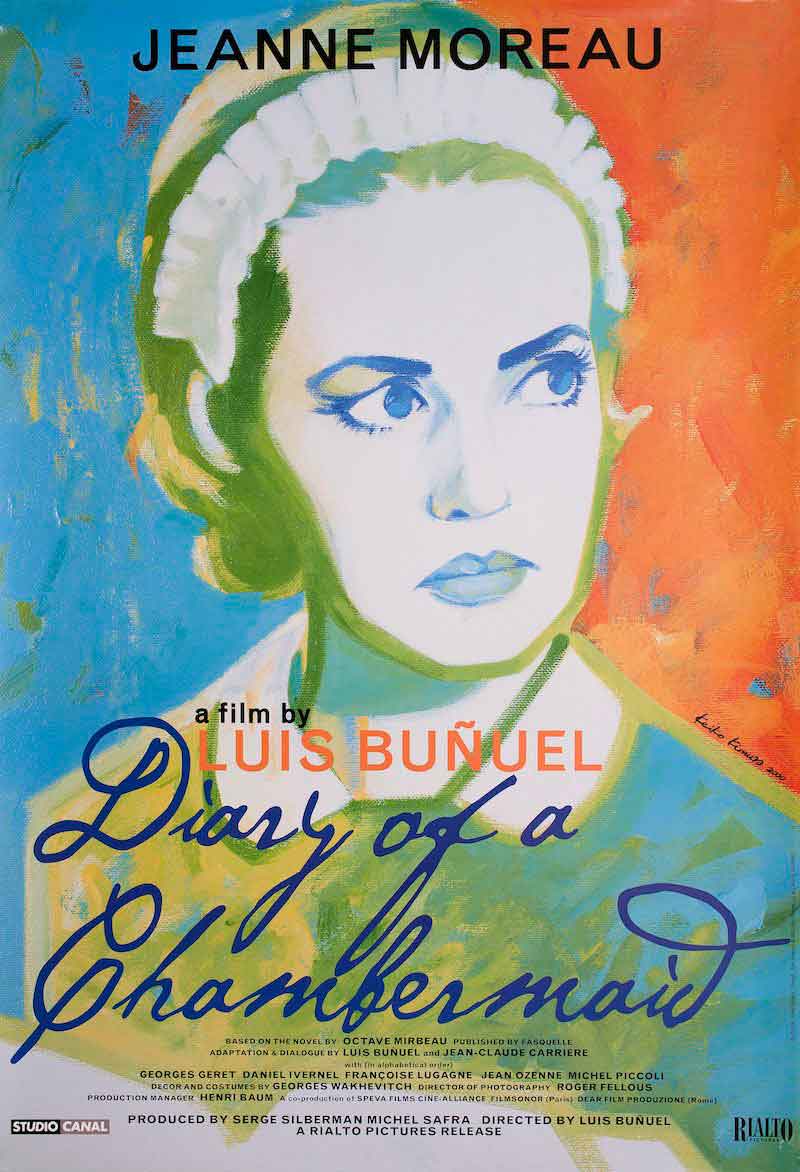 “Filming Jeanne Moreau was a great pleasure; when she walks, her foot trembles just a bit on its high heel, suggesting a certain tension and instability. She taught me things about the character that I’d never suspected were there.”
– Buñuel

“In many ways, the definitive Moreau performance: She glides in masquerading as an innocent, quickly takes stock of her situation and then calculates how to get exactly what she wants.”
– Jason Bailey, The New York Times

“[Buñuel] digs right down to that spiritual gunge which links political, sexual and social positions (and impositions) as equal perversions of human desires (in turn perversions of animal desires). Like most Buñuel heroines, Célestine is intuitively a feminist, but before her time, and blows it by her egoism and ambivalence before male ruthlessness. Moreau's baleful charisma complements Buñuel's sardonic sadness.”
– Time Out (London)