HEART OF A DOG

WRITTEN AND DIRECTED BY LAURIE ANDERSON

Lolabelle was Laurie Anderson’s beloved rat terrier. “Hello, little bonehead. I’ll love you forever,” is how she greets the puppy in the movie's hilarious first scene in which she gives birth to her dog.  Dreams, memories, and stories of childhood trauma and loss form a kind of emotional wallpaper against which Anderson foregrounds her story. The musician/composer/poet/philosopher creates a humorous, deeply moving meditation on the relationship of woman and dog, and in the process comments with wit and prescience on the changes in post-9/11 America. Rat terriers are bred to protect borders, but Lolabelle not only engages in the kind of surveillance the filmmaker notes proliferating everywhere, but also plays experimental piano and paints. "Every love story is a ghost story,” Anderson quotes David Foster Wallace, as she illuminates the Buddhist concept of the afterlife (the bardo). HEART OF A DOG employs an original, hypnotic visual language that embraces animation, home movies, and loop-like images, complemented by Anderson’s signature music. The artist dedicates her work “to the magnificent spirit of my husband Lou Reed (1942 – 2013).”

On sale now at concession: 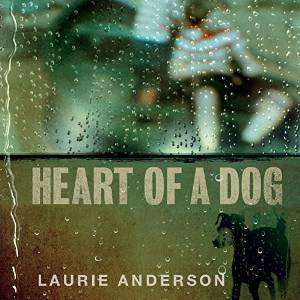 “CRITICS’ PICK…Dreamy, drifty and altogether lovely… It joyfully embraces silliness…At times, it feels as if she too were haunting her movie even as, with every image and word, she fills it with life.”
– Manohla Dargis, The New York Times
Read the full review here.

“A lucid dream of a movie…studded with tough observations and philosophical nuggets. Pity the fool who doesn’t respond to its lyricism and to the depth of emotion under those Rod Serling cadences.”
– David Edelstein, New York magazine

“An incredibly wise yet never maudlin meditation on loss, technology, terrorism, surveillance, family, love, and Eastern philosophy… Through this process of abstracting the everyday, Anderson puts us in a position to better reflect upon and cope with the great equalizer of death, without fear or despair.”
– Violet Lucca, Film Comment

“Invokes the spirit of the late French documentarian Chris Maker… A spellbinding score (by the director herself), and intimate, ruminating voice-over. This is smart, silly, sad, and relentlessly honest – one of the most moving and provocative films you’ll see this year.”
– Bilge Ebiri, Vulture/New York Magazine online