Commemorating the 70th anniversary of the tragedy of Hiroshima

(1959) “You saw nothing in Hiroshima. Nothing.” “I saw everything. Everything.”   Entangled, unmoving limbs covered in ash, the bodies of two lovers:  French actress Emmanuelle Riva (2012 Oscar nominee for Amour), in Japan to make a “peace” film about Hiroshima, finds in the course of her brief affair with Japanese architect Eiji Okada (Woman in the Dunes, The Ugly American) compulsively returning to her traumatic post-war experiences, her love for a German soldier and her own shaming.

Asked to do an anti-nuclear documentary in the wake of his powerful Holocaust doc Night and Fog, Resnais opted instead for a feature exploring mutual guilts and the power of memory via multitudes of sometimes tiny timeshifts intercut with the present day lovers’ marathon conversation – all by first-time scripter but already-distinguished novelist Marguerite Duras, whose screenplay was nominated for an Academy Award. This year marks Duras’ centennial.

A pillar of the French New Wave, Hiroshima was awarded the International Critics’ prize at the 1959 Cannes Film Festival. Due to its harrowing anti-nuclear stance, it was kept out of the main competition to avoid offending the U.S.

Hiroshima Mon Amour has been restored in 4K by by Argos Films, Fondation Groupama Gan, Fondation Technicolor, and Cineteca Bologna, with support from the CNC. 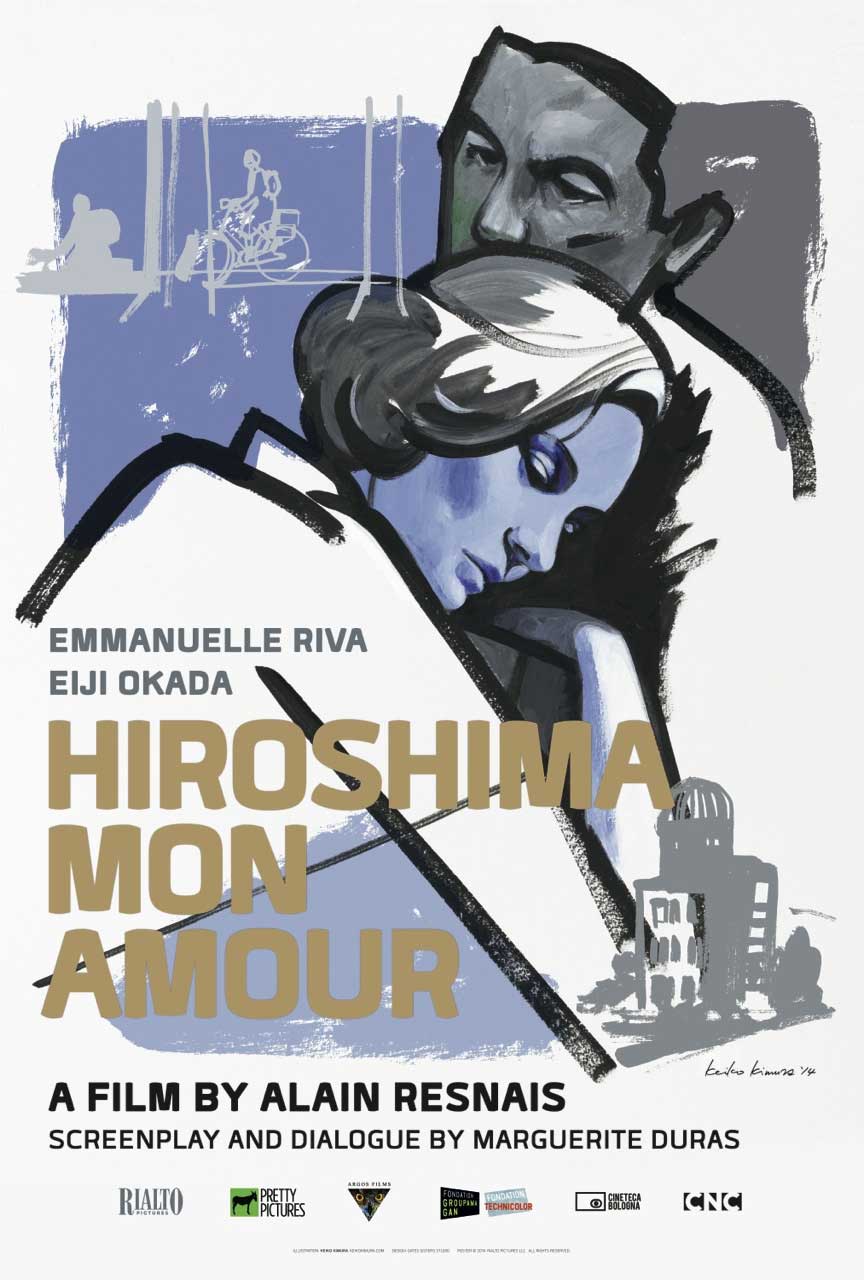 [highest rating]
#1 CRITICS’ PICK!
“Among the many masterpieces of the French New Wave, Resnais’s 1959 memory drama is easily the most passionate: a cross-cultural romance tinged by shame and regret.”
– Time Out New York

“RESNAIS’ TESTAMENT! THE MOST IMPORTANT CONTRIBUTION TO FILM AESTHETICS SINCE CITIZEN KANE! Duras’ script soars to new levels of narratage... Riva's portrayal provides that rare illusion of continuous existence beyond the ellipses of the cinema.”
– Andrew Sarris

“ONE OF THE MOST INFLUENTIAL FILMS IN THE SHORT HISTORY OF THE MEDIUM! It's difficult to quantify the breadth of Hiroshima's impact.”
– Kent Jones

“BY FAR THE MOST IMPRESSIVE RESTORATION I'VE EVER SEEN!”
– Scout Tafoya, RogerEbert.com

“VISUALLY PERFECT LIKE FEW OTHERS! There's barely a frame you couldn't extract, expand and hang on the wall.”
– Tom Huddleston, Time Out (London)

“THE MOST BEAUTIFUL FILM I’VE EVER SEEN!”
– Claude Chabrol