(1961) “I no longer have ideas. Only memories.” A day and a night in the life of a troubled marriage, set against Milan’s gleaming modern buildings, its gone-to-seed older quarters, and a sleek modern estate, all shot in razor-sharp b&w crispness by the great Gianni di Venanzo. Writer Marcello Mastroianni and his wife Jeanne Moreau visit a dying friend; drop by a night club with an amazing Black contortionist dancer; then wind up at an all-night party at a suburban villa, where Mastroianni flirts with seeming playgirl Monica Vitti, while Moreau tries for a sports car affair of her own, until a tormented dawn encounter at a deserted golf course. Perhaps Antonioni’s most compassionate examination of the emptiness of the rich and the difficulties of modern relationships (minority naysayer Pauline Kael’s review was headlined “The Come-Dressed-As-the-Sick-Soul-of-Europe Parties”); while its tour-de-force, Moreau’s walk through the streets of Milan, “has its place in any film anthology” (Mira Liehm). DCP Restoration. Approx. 122 mins. 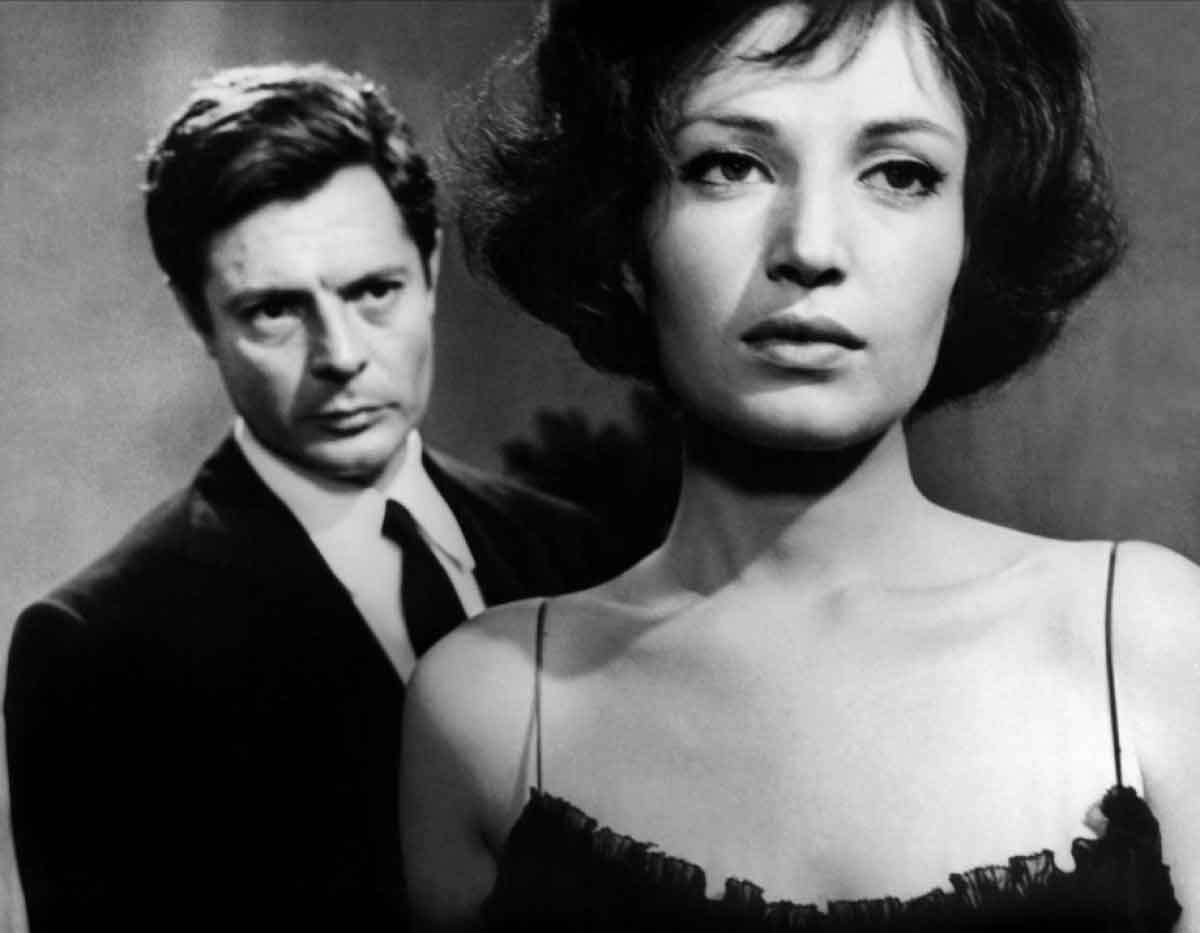 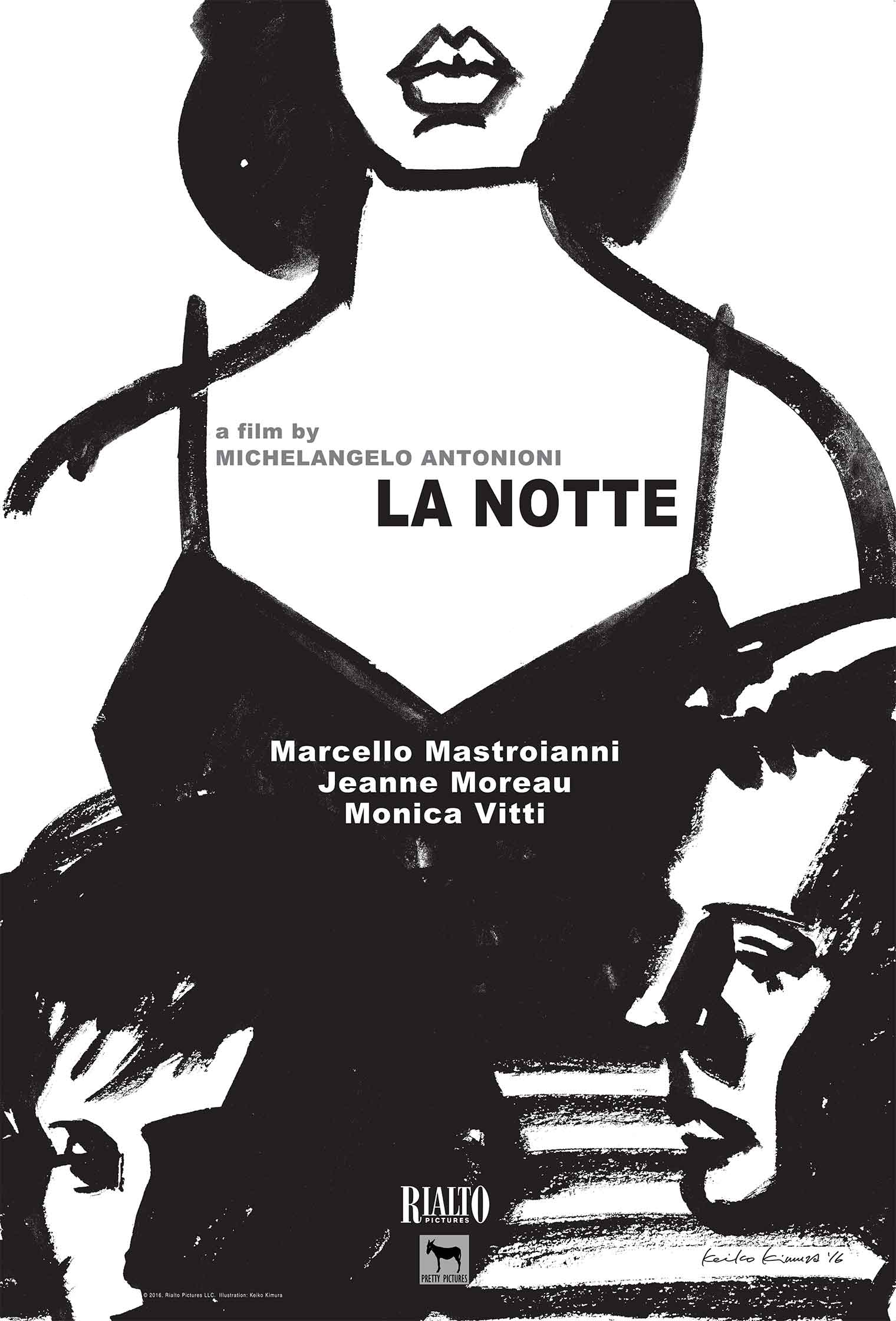 “Externally placid yet bubbling with unrealized dread, sorrow, and sexuality. It’s a muted siren of a movie.”
– Sam Weisberg, The Village Voice

“IMPOSSIBLE TO REPLICATE. An incredibly relatable portrait of distracted disaffection...with the oblique precision of a play, lays out the inevitability of disappointment, the finality of regret, and the failure of love, projecting a shade of self-pity that colors Mastroianni and Moreau’s dual dances of withdrawal into the self and desperate leaps out into the world.”
– Mark Asch, Brooklyn Magazine

“A turbulent dissection of romantic longevity...Antonioni’s most emotionally acute and devastating deconstruction of the interpersonal travails of the bourgeoisie…[his] concern is nothing less than the human condition itself, stripped of melodrama and offered up to the viewer, to either face up to or reject outright, in the purest form the medium has yet conceived.”
– Jordan Cronk, Slant Magazine

“[Antonioni] made his beautiful, skeptical, ironic muse Monica Vitti the arthouse pin-up of the 1960s and created a new Italian cinema – cool, oblique, Marxist – to succeed Neo-Realism. ANTONIONI NEVER MADE ANYTHING BETTER… CINEMA WAS NEVER THE SAME AGAIN.”
– Philip French, The Guardian

“THE MOST MOVING PART OF ANTONIONI’S TRILOGY! Because they are married, and because they are Marcello Mastroianni and Jeanne Moreau—above all, because she is Moreau—La Notte is the gravest movement in Antonioni’s trilogy, the one with L’Avventura and L’Eclisse as its wings…. Moreau’s abandoned face is one of the great images of twentieth-century disaster.”
– David Thomson

“The world of La Notte isn’t an absurd or meaningless one; it’s one that hides its profoundest meaning in plain sight, that owes its almost incalculable profundity to the immediacy of its visual patterns and abstractions, and that Antonioni both damns and redeems in the same gesture, the same moment, by means of his own art.”
– Richard Brody, The New Yorker

“The real beauty of the film, the real depth of its intelligence, continues to lie in the clarity of the montage — the way the world is revealed to us moment by moment. The camera’s delicate interactive grace, participating with the fluidity of the characters’ changing points of view, is profound in itself.”
– Nathaniel Dorsky, Devotional Cinema