LEVIATHAN is the latest masterwork from Andrey Zvyagintsev, director of THE RETURN (the 2003 Venice Film Festival Golden Lion winner and Golden Globe nominee), and ELENA, a Film Forum premiere in 2012. Zvyagintsev’s movies are noted for their fearless portrayals of the new Russia, its powerful oligarchs and sketchy politicos, and the ordinary people over whose lives they hold sway. Stunningly photographed in a remote fishing village in northern Russia, this intense, yet satiric drama focuses on a besieged everyman: Kolya, the owner of an auto-repair shop, who has a young, attractive wife and a son from a previous marriage. Having inherited a home on the scenic bluffs of the Barents Sea, he is the owner of an exquisitely-sited property that the town’s corrupt mayor will stop at nothing to possess.

“(A) masterpiece. Stunning images. The movie expands, breathtakingly, into mordant humor, impenetrable mystery, ferocious satire and classic tragedy. Mr. Zvyagintsev’s direction is so precise, his concern for concision so steadfast, that screen time is never squandered on what can be inferred. Every moment in LEVIATHAN is emotionally charged. Every image has its impact. Magnificent cinematography….Every character comes alive through flawless performances.”
– Joe Morgenstern, The Wall Street Journal

“A grave and beautiful drama, at once intimate and enormous. Pictorially ravishing in the best Russian wide-screen tradition…  Mr Zvyagintsev layers social commentary, intense emotion and spiritual allegory without ever losing the human dimension of the narrative.”
(Best of 2014 List)
– A.O. Scott, The New York Times

“Breathtaking Arctic scenery, political corruption, sex and vodka – LEVIATHAN is the year’s best foreign film.  May be the one true masterpiece of global cinema released in 2014.  A psychological thriller, a scathing political satire, a powerful and upsetting family drama, a dark comedy and a work of magnificent landscape cinematography and startling pictorial intensity. It’s grand and novelistic, in the spirit of Turgenev and Tolstoy, intensely observed and ironic, in the spirit of Chekhov, and contemplative and spiritual, in the spirit of Tarkovsky.  A bitter and compassionate work of genius.”
– Andrew O’Hehir, Salon

“A vodka-soaked middle finger to Putin. A whale of a movie.  A tragedy with a hint of black comedy that…lands a bruising punch on modern Russia. The film is sweeping, curious and bold, told in widescreen with a sense of the epic applied to everyday lives…. with all the detail and density of a great novel.”
– Dave Calhoun, Time Out New York

“A new Russian masterpiece. A mix of Hobbes, Chekhov and the Bible, and full of extraordinary images and magnificent symmetry.”
– Peter Bradshaw, The Guardian 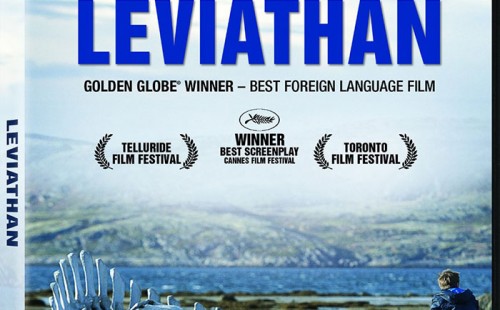 $20 $9 LIMITED QUANTITIES AVAILABLE. ORDERS WILL BE FULFILLED IN THE ORDER THEY WERE RECEIVED.