(1985) “Don’t crumple those snack wraps!” In an eiga-kan (moviehouse), dapperly white-clad yakuza Kôji Yakusho forcefully points out to a hapless audience member and – speaking directly to the screen – us, that he doesn’t like his screenings interrupted.  That said, Shane-like truck driver Tsutomu Yamazaki (the kidnapper in Kurosawa’s High and Low and the veteran mortician of Departures) and his sidekick, a very young Ken Watanabe (late of Broadway’s King and I revival), are trapped by a downpour in Nobuko Miyamoto’s (real-life wife of director Itami) ramen joint – but all Yamazaki winds up with is a knuckle sandwich when opinions differ on the quality of her fare. Itami’s “Noodle Western” is an exploding piñata of gags on man’s two eternal favorites – food and sex – as Miyamoto’s Tampopo (literally, “Dandelion”) embarks on a relentless quest in search of the perfect noodle, with plenty of room for tangents on how to cook a delicious rice omelet before the night watchman comes in; how to enhance bedroom delights with a raw egg; and how dreams of yam sausage can assuage the after effects of a bullet fusillade. Don’t see this on an empty stomach. Restored in 4K from the original camera negative. Approx. 114 mins. 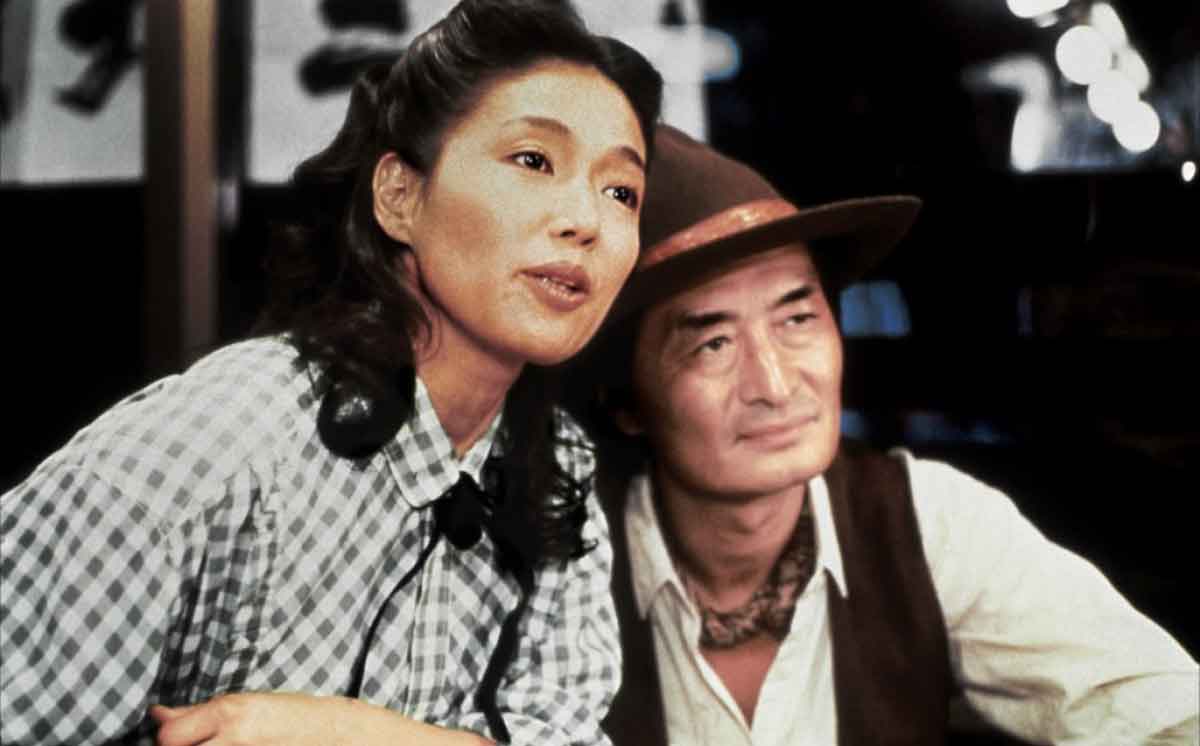 “A DAZZLING RESTORATION! Tampopo is right up there with Ratatouille and Big Night when it comes to peerless movies about food.”
– Joe Morgenstern, The Wall Street Journal

“GLEEFULLY SENSUAL AND INVENTIVE. In a new 4K restoration, Tampopo is more vivid and seductive than ever: a garden of sensual delights that plays like a romp through a surreal amusement park. [The film is] red-hot and saturated with color and emotion. Almost every time you think Itami is simply luxuriating in succulent atmospheres, he cracks a comic whip. Tampopo creates a culinary empire of the senses while entertaining an audience like crazy.”
– Michael Sragow, Film Comment
Read the full review here.

“A WEIRD, MOUTHWATERING MASTERPIECE. A restoration as bright as the sheen of fat glistening on the surface of a great bowl of ramen. The messy, silly, sexy Tampopo doesn’t embrace that spirit of simplicity; Itami piles every ingredient imaginable into his bowl, but who cares? It’s delicious, and you’ll slurp up every bite.”
– Dan Kois, Slate

“A DELECTABLE COMEDY! Tampopo’s humor can be gut-busting, but food is never the butt of the joke. It triggers behavior and serves as an expression of individual philosophy….Everyone needs nourishment, and Itami found humor and poignancy in how it’s provided and received. His wife [Nobuko] Miyamoto was the Giulietta Masina to his Federico Fellini, the heart in Itami’s absurdist humor. Her meek Tampopo isn’t thought to have the ability or stamina to make first-class ramen, but Miyamoto’s subtle portrayal of her growing confidence is a joy to behold. Food isn’t just consumed in Tampopo — every bite is an ode to life.”
– Serena Donadoni, The Village Voice

“HILARIOUS. A stirring ode to the perfect bowl of noodles. The finest work of the late master Juzo Itami.”
– Joshua Rothkopf, Time Out

“Unfolds like a prix fixe tasting menu of strange comic delights, the director’s fabulist sensibilities feeding into an episodic foodie fantasia about all of the things that give life its flavor and make it worth savoring.”
– David Ehrlich, Indiewire

“A joyous wallow in the art of living to eat…The movie, a sublime sukiyaki of cooking tips and parodies, is obscenely pleasurable, and pleasure is its cheerful obsession. Tampopo finds in food a source of magical communion; like sex and oysters, this movie is best savoured amongst friends… Itami is the happiest, least fussy of cooks. Surveying a collection of hoboes as they rhapsodise about a 1980 Bordeaux, the hero sighs, ‘They live deeply, these vagabonds.’ Tampopo is about living deeply, sloppily, with feeling.”
– David Edelstein, Village Voice

“A FILM GOURMAND’S LUSTY DREAM!  A RAMBUNCTIOUS MIXTURE OF THE BAWDY AND THE SUBLIME!”
– Washington Post

“A Seven Samurai-style gathering of talents, military regimentation, and industrial espionage. On to this loose structure, Itami grafts a plethora of comic vignettes whose sole link is their focus on food: a Zen lesson in the proper way to contemplate, caress, and devour pork noodles; how to enhance your love life with salt, lemon and cream; how to let dreams of yam sausages ease the onset of death… Bulges with invention, ranging from a continuing concern with Japanese concepts of correct behavior to numerous quirky movie parodies.”
– Geoff Andrew, Time Out (London)

“Abounds in sly digs at the ways in which Western styles of life and thought have invaded Japan. Examples of the latter range from countless Hollywood parodies – a fistfight establishing friendship à la Howard Hawks, a sentimental song among vagrants suggesting John Ford, a cowboy hat worn in a bathtub evoking Dean Martin in Some Came Running, a training regime out of Rocky – to the flashy French dress worn by the eponymous heroine.”
– Jonathan Rosenbaum, Chicago Reader