THE BATTLE OF ALGIERS

Based on the book by Saadi Yacef

(1966) Algiers, 1957:  French paratroopers inch their way through the labyrinthine byways of the Casbah to zero in on the hideout of the last rebel still free in the city. Flashback three years earlier, as the Algerian National Liberation Front (FLN) decides on urban warfare. Thus begin the provocations, assassinations, hair-breadth escapes, and reprisals; Algerian women – disguised as chic Europeans – depositing bombs at a sidewalk café, a teenagers’ hang-out and an Air France office; and massive, surging crowd scenes unfolding with gripping realism. FLN boss/producer Saadi Yacef (who also plays the rebel leader based on himself) interviewed several European filmmakers before settling on Italians Pontecorvo and screenwriter Franco Solinas, with sequences shot and edited to the driving score by Pontecorvo and the legendary Ennio Morricone. Algiers feels like it’s been ripped from today’s headlines, from its random bombings to the French commander’s chilling press conference pronouncement that to combat terrorism “you must accept all the consequences.” The Pentagon screened it in the wake of 9/11. Oscar-nominated for Best Foreign Film, Best Screenplay and Best Director and winner of the Golden Lion (Grand Prix) at the Venice Film Festival. Restored in 4K by Cineteca di Bologna and Istituto Luce - Cinecittà at L'Immagine Ritrovata laboratory, in collaboration with Surf Film, Casbah Entertainment Inc. and CultFilms. Approx. 121 mins. 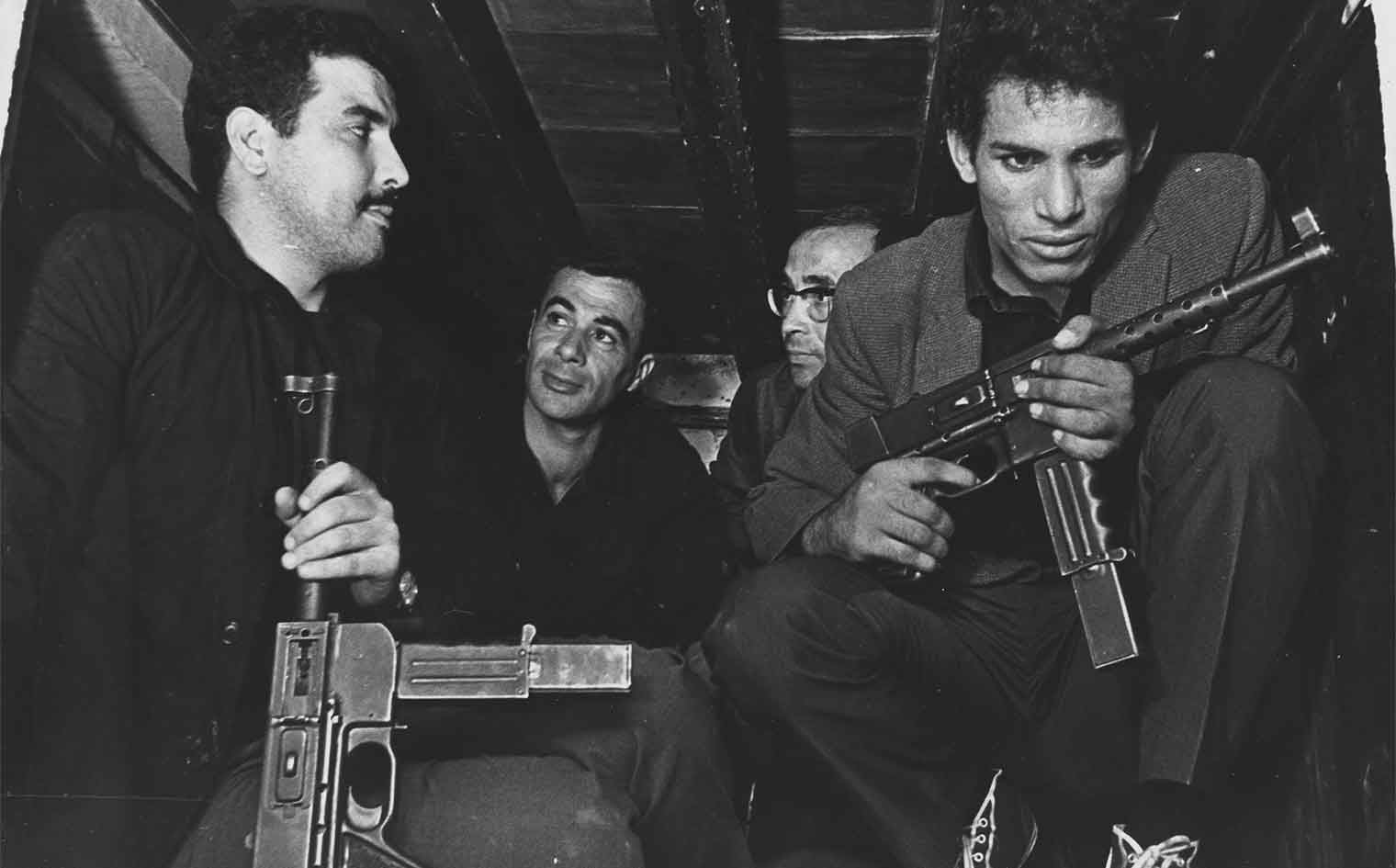 “The Battle of Algiers speaks to our times, but it’s also a filmmaking astonishment. It’s a film so clear-eyed and thorough that it’s been studied and celebrated by revolutionaries and counter-revolutionaries alike. It’s proven relevant at almost every anxious turn of post-colonial global politics, speaking to questions of terrorism, torture, guerrilla resistance and racial profiling…Cinematically, it’s simply astonishing. The clock-as-monster device evokes Kubrick’s The Killing, the merciless/merciful montage of faces in the moment right before they’re made to suffer recalls Eisenstein’s Battleship Potemkin and the interwoven acts of violence offer a blueprint for the ritual score-settling of The Godfather films.”
- Eric Hynes, The Village Voice

"Harrowing and kinetic...not merely a masterpiece but one of the boldest antiwar movies ever made. There’s a reason it’s been studied in the Pentagon.”
- Joshua Rothkopf, Time Out

“PROBABLY THE MOST STIRRING REVOLUTIONARY EPIC SINCE POTEMKIN!”
– Pauline Kael

“A MASTERPIECE!  Surely the most harrowing political epic ever!”
– Philip Gourevitch, The New Yorker

“Even today it’s easy to see why the results outraged French officials (who banned it until 1971) and astonished everyone else. No other fiction filmmaker had so accurately replayed a recent, world-shaking conflict. No one else had pursued the truth by creating a big film with so few trained performers (138 people picked off the streets, augmented by a single professional actor). And apart from Orson Welles, no one before had so imaginatively imitated the look of a newsreel, although Welles had pulled the trick only for the ‘March of Time’ segment of Citizen Kane, whereas Mr. Pontecorvo kept up his illusion for 123 minutes. The term docudrama was not yet in wide use, and already Mr. Pontecorvo’s film overshadowed the nascent genre.”
– Stuart Klawans, The New York Times

The Battle of Algiers: Q & A with Producer/Star Saadi Yacef moderated by Fred Kaplan

Recorded October 7, 2016
THE BATTLE OF ALGIERS