WRITTEN AND DIRECTED BY EMMA DANTE

Imagine Chekhov’s Three Sisters (now five), in 1980s Sicily. Adapted from her prize-winning stage play of the same name, Emma Dante’s moving, decades-traversing drama THE MACALUSO SISTERS follows a family of five orphaned sisters living on the top floor of a distressed building in Palermo, who rent pastel-painted doves to weddings and birthdays to earn a living. When a sudden catastrophic seaside event alters the family dynamic, they are left grappling with the outcome. The delicate balance of sisterhood is tested in this accomplished, generation-spanning three-act sophomore feature. In the Financial Times, Wendy Ide writes that THE MACALUSO SISTERS is, “a hauntingly lovely, strikingly unusual portrait of family trauma.”

THE MACALUSO SISTERS premiered in competition at the 2020 Venice International Film Festival where it won the Pasinetti Awards (given by the National Union of Italian Journalists) for Best Film and Best Actress (awarded to the ensemble cast playing the sisters).

“Critic's Pick. HAUNTING AND POWERFUL. No mere sun-kissed coming-of-age film… Metaphysical grace and hints of fantasy… Magical moments are grounded by (the) tactile photography, which accentuates the youthful vitality of the sisters’ bodies and the playful chaos of their movements.”
– Beatrice Loayza, The New York Times

“Tempestuous and touching. Perhaps it’s the Italian playwright’s experience with stage dramaturgy that allow her to perform this telescoped trapeze act with such elegance, but even so, the skill with which Dante adapts her own play, marshalling three sets of actors… and brings it soaring to full cinematic life is remarkable. A director of unusually vivid empathy. (An) exceptionally confident film. Dante’s sensitive screenplay and her fine army of actresses… create a beautifully melancholic and often extraordinarily moving celebration of the frictive love that exists between sisters. The Macaluso sisters are marvelous creatures indeed: common as pigeons, precious as doves.”
– Jessica Kiang, Variety

“Beautifully composed tale of how a tragic accident in childhood poisons four adult lives: people who grow old while remaining frozen in a single, stricken instant like cursed souls in a fairytale. A touching story, expertly told.”
– Peter Bradshaw, The Guardian (UK) 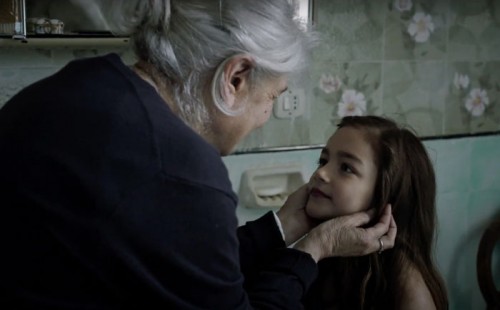