France’s official submission to the 2021 Academy Awards®, included in the shortlist for Best International Feature Film

A love story of clandestine passion that critics give glowing praise: “Barbara Sukowa and Martine Chevallier bring to life an unforgettable lesbian couple whose sexual flame still burns brightly and whose mutual devotion is quietly thrilling. A romance this convincingly lived-in is rare indeed. Director Filippo Meneghetti’s incredibly deft feature debut is cause for celebration.” (Lisa Nesselson, Screen Daily) “A smart movie that starts from a relatively simple yet captivating premise and then steadily gains in complexity as it develops. It transitions from tender romance into penetrating sorrow before taking on notes of mordant humor and unexpected quasi-thriller elements. Driven by powerhouse, impassioned performances from Barbara Sukowa and one of contrastingly delicate brushstrokes by Comdie-Française veteran Martine Chevallier... Gives the mighty Sukowa… the kind of juicy, multifaceted role too rarely afforded actresses in their later careers. And Chevallier is marvelous.” (David Rooney, The Hollywood Review)

“An entirely unique and uniquely vital lesbian love story. This often-moving film… is an affirmation of our universal desire for emotional intimacy. Quietly groundbreaking. (The) screenplay deftly adds layers of thematic complexity that go beyond the facile. (A) moving, deceptively complex drama.”
– Mark Keizer, Variety

“Two women’s love story plays like a thriller. Starring two terrific veteran actors, (the film) shakes up everything we think we know, or expect, from stories about women who are well past childbearing age. (The film) is most definitely a love story, but it’s not a cozy one. In some ways TWO OF US is a horror movie, but only about the sometimes unintentional monstrousness of allegedly grown-up children. Both actors are marvelous to watch. Sukowa’s Nina has a magnificent, vibrating power that never fully obscures her vulnerability. TWO OF US keeps you guessing until the very end.”
– Stephanie Zacharek, Time

“A passion burns steadfastly bright while desperation opens the door to madness. (The film) is elevated by the beauty of its performances, and by its masterly technique. Captures a timeless essence of unconditional, all-consuming love. Its singular power (is the) hurtling urgency of the storytelling and the brilliance of the acting. Ms. Sukowa’s performance here is fearless; it’s also fevered, frightening, and transcendent. Ms. Chevallier speaks volumes with her darting eyes. She suggests shimmering emotions with the faintest smile. TWO OF US pulls us in and never lets us go.”
– Joe Morgenstern, Wall Street Journal 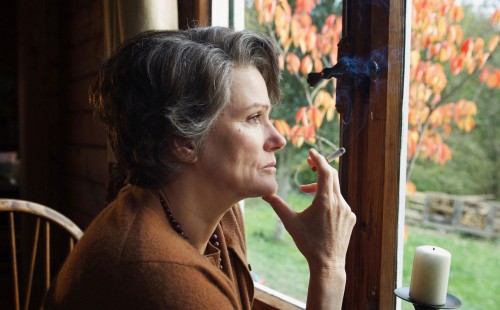