Part of the series
THE HOUR OF LIBERATION:
Decolonizing Cinema, 1966-1981

Following the screening of Gillo Pontecorvo’s masterpiece of political filmmaking THE BATTLE OF ALGIERS, produced by and based on the memoirs of FLN (Algerian Liberation Movement) leader Saadi Yacef, Elaine Mokhtefi will appear for an audience Q&A, moderated by writer Elias Rodriques (The Nation, n+1).

Mrs. Mokhtefi is the author of Algiers, Third World Capital (published by Verso Books), a memoir of her time in Algiers after the war for independence, when Algiers was considered “the liberation capital of the Third World.” Throughout the 1960s and 70s, Mokhtefi crossed paths with some of the era’s brightest stars: Frantz Fanon, Stokely Carmichael, Timothy Leary, Ahmed Ben Bella, Jomo Kenyatta, and Eldridge Cleaver. She was instrumental in the establishment of the International Section of the Black Panther Party in Algiers. She was also present at the filming of The Battle of Algiers, in which she briefly appears.

Elaine Mokhtefi was born in New York. After the Second World War, she joined the youth movement for world peace and justice, becoming director of a militant student organization. In 1951 she settled in France as a translator and interpreter for international organizations in the new post-war world. In 1960, she joined a small team in New York as part of the Algerian National Liberation Front, lobbying the United Nations in support of the government in exile and working for Algerian independence. When the struggle was won, she made Algeria her home, working as a journalist and translator. She married the Algerian writer and liberation war veteran Mokhtar Mokhtefi, who died in 2015. A painter as well as a writer, she lives in New York.

Reviews of Algiers, Third World Capital (on sale at our concession throughout The Hour of Liberation: Decolonizing Cinema, 1966-81)

“A return to a time when Algiers was Mecca and the Vatican for revolutionaries. Indeed, at the time Amilcar Cabral said: ‘Muslims go on pilgrimage to Mecca, Christians to the Vatican and national liberation movements to Algiers.’”
– Kader Bakou, Le Soir d'Algerie 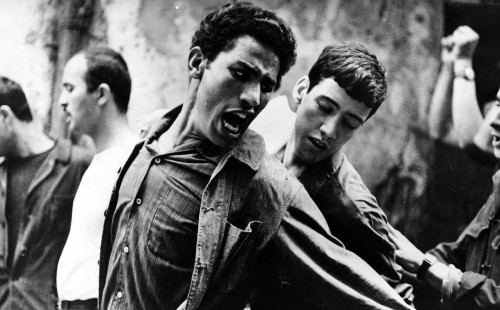 THE BATTLE OF ALGIERS