MY ARCHITECT
Special Screening and Q&A with Filmmaker Nathaniel Kahn

A new restoration of the Academy Award-nominated MY ARCHITECT, which received rapturous reviews when it first opened at Film Forum nearly 20 years ago. Louis Kahn, who in 1974 died bankrupt and alone in New York City’s Pennsylvania Station, is considered by many architectural historians to be the most important architect of the second half of the 20th century. He left behind a brilliant legacy of intensely powerful and spiritual buildings – geometric compositions of brick, concrete, and light, that in the words of the L.A. Times “change your life.” Kahn’s dramatic death laid bare a complex personal life of secrets and broken promises: he led not a double, but a triple life. In addition to his wife and daughter, there were two non-marital children by two women with whom he maintained long-term relationships.

In MY ARCHITECT, one of these children, Kahn’s only son, Nathaniel, sets out on an epic journey to reconcile his father’s life and work. I.M. Pei, Frank Gehry, and Philip Johnson speak movingly of Kahn’s work (the Salk Institute, the Exeter Library, the Kimbell Art Museum, the Capital Complex of Bangladesh) and the women and children in his life shed light on this secretive, peripatetic man—a dynamo who gave selflessly to his art – but whose relationships were left on the drawing board, only to find completion in this wonderful film.

“Astonishingly, this personal saga blossoms into a CITIZEN KANE-like meditation on whether anyone is truly knowable – but the showpiece is Kahn the younger’s spellbinding photography, which shows off his dad’s buildings’ epic grandeur as well as their spiritual intimacy.”
– Robert Kolker, New York Magazine

“This fascinating portrait of an eccentric visionary and his chaotic triple family life is an accomplished, enormously satisfying nonfiction work.”
– David Rooney, Variety

“For gripping drama and suspense, there are few fictional movies that can hold a candle to Mr. Kahn's odyssey through time and space.”
– Andrew Sarris, New York Observer 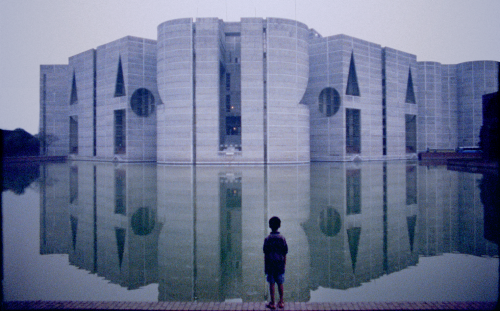