Alec Guinness in
THE LADYKILLERS

Now Playing in Theater Only

The apogee of the classic post-war “Ealing comedy,” this would also be Guinness’ penultimate film for the studio, where he soared to international acclaim with such hits as Kind Hearts and Coronets (in which he played 9 roles), The Lavender Hill Mob, The Captain’s Paradise, and Mackendrick’s The Man in The White Suit.

A year later, American-Scottish director Mackendrick would make the acerbic Sweet Smell of Success, while American screenwriter William Rose –– who got an Oscar nomination for his Ladykillers story, which he reportedly thought up in a dream –– would go on to write The Russians Are Coming, The Russians Are Coming and It’s a Mad, Mad, Mad, Mad World.

The last British film shot in the 3-strip Technicolor process, The Ladykillers has been restored by Studiocanal from the original Technicolor camera negatives. The restoration, available on no other platform, showcases the movie’s color cinematography, costumes and production design (especially Johnson's delightfully lopsided house, still subsiding after WWII bombings) – as they haven’t been seen in over 65 years.

The British Film Institute has ranked The Ladykillers as (appropriately, given the darkness of its comedy) the 13th greatest British film of all time. DCP. Approx 91 min.

“A SUPERBLY ELEGANT COMEDY. Even after 65 years, it still kills… Subversive, hilarious and as English as Elgar… A mixture of cynicism with guileless innocence.”
– Peter Bradshaw, The Guardian

“The last, most enduring and best known of all the studio’s comedies, in which the sheer blackness of the central concept is barely disguised by the accomplished farce which surrounds it.”
– Time Out 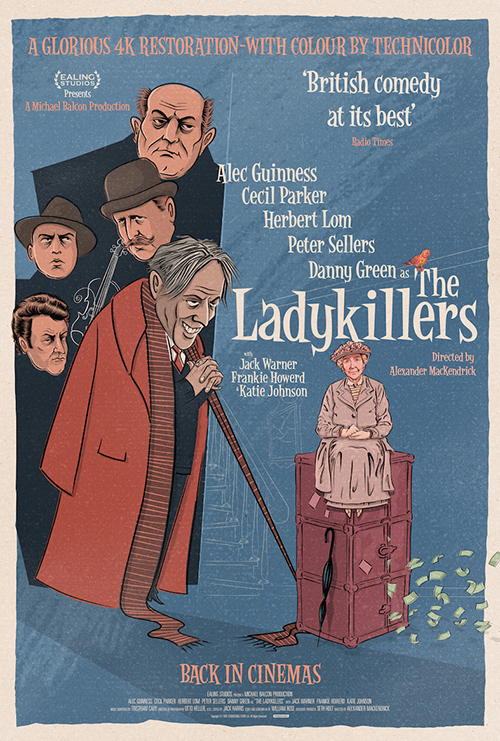